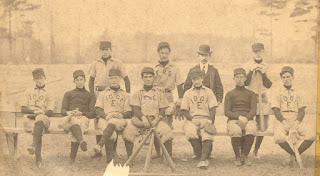 In the years just following the Civil War, baseball began to be referred to as the “national sport”. The soldiers had played the game whenever they hadn’t been fighting and it was brought home to the thousands of small towns across America. Exeter was no exception and baseball became quite popular in town.

According to an Exeter News-Letter article published in 1943, the first baseball team in town was formed in the early 1870s. A purely amateur team, the Exeter Eagles played any other team that challenged them. The News-Letter mentioned that, “by and large only a few towns have had a baseball team strictly on an amateur basis and composed entirely of representatives of the town as Exeter had in the Eagles in their day.”

The game was played quite differently in its early years, “the players used no gloves at all and the modern ‘baskets’ worn by the players of today would amaze them,” continued the News-Letter, “They had no masks or pads. The distance of the pitcher from the home plate varied and there was no well defined box. Later he was allowed to run a few steps before pitching. The catcher stood back and caught the ball on the bound as a rule so that base stealing was easy, but he always came up behind the bat when there was a runner on third base.”

The Eagles disbanded after a few seasons, but other teams were formed in town. The fire department’s Hook and Ladder Company took on the M.D.F. Steere Company of Amesbury in 1899 and won 16 to 3. Always good hosts, both teams then repaired to the Hook and Ladder house for a hearty supper – which was interrupted twice by working fires. The Amesbury team pitched in to help and neither fire kept them from their dinner and dancing for very long.

Phillips Exeter Academy and Exeter High School both brought to the sport to their students. The annual Exeter –Andover game became a local event.

As enthusiasm for baseball grew, the sport became more organized. The New England League got its start in 1886 and went through several incarnations before finally folding in 1949. New Hampshire had minimal participation in the league due to restrictive blue laws – most of the games were played on Sunday, which was against the law in the state. Although officially on the books, the ban on playing sports on the Sabbath was largely overlooked in the amateur level. When, in 1917, the New Hampshire General Court proposed, and then rejected, taking the ban off the books, J.D. Leach wrote an angry letter to the News-Letter:
“I have been in Exeter for two years and am returned for a third. During the last two years baseball is played in this town during the months of May and June on pleasant Sundays. This isn’t heresy, it is a fact. Baseball was played last Sunday. When the House of Representatives overwhelmingly defeated that bill to allow Sunday baseball the inference is that the above law holds good. Will it in Exeter? What will the officers do in upholding this law? Are they waiting for someone to make a complaint? If they are it will be forthcoming. I will everlastingly denounce and condemn any form of lawlessness whether it is participated in by society so-called or mob rule.”

Leach doesn’t seem to have attracted many fellow-travelers to his baseball ban. The games continued on Saturdays and Sundays. Some teams, like the firefighters, challenged other teams in their profession. In 1891, the Exeter Printers defeated the Haverhill Printers 16 to 11.

The Clippers were a favored Exeter team for many years and the Exeter Bears, the town’s only semi-pro team, went all the way to nationals in 1950. By that time, the game was standardized and the teams played on the high school field. It was a far cry from the way the Eagles had played, on the Park Street plains eighty years earlier. The News-Letter remarked, “While the Eagles were a splendid team in those days and in a class all by themselves they would probably make a poor showing today if stacked up against a team of only moderate ability due to the change in playing. Although heavy batters in their day they would probably be helpless before a good pitcher now.”
Email Post