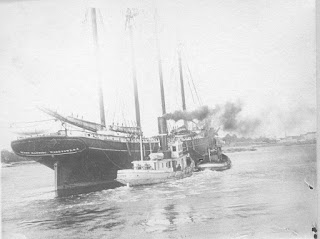 “The three-masted schooner, Benjamin T. Biggs of Exeter, H.W. Anderson controlling owner, was abandoned Sunday in a water logged condition 55 miles south-west of Seguin, an island off the mouth of the Kennebec,” related the Exeter News-Letter in July of 1900. The Biggs was a frequent visitor to the wharves of Exeter, hauling coal by the ton for H.W. Anderson. But she didn’t survive her trip down the Kennebec River. When Anderson traveled to Maine to check on his schooner, it was too late.

The Squamscott River connects to Great Bay and ultimately the Atlantic Ocean. In the early part of the 19th century, salt, bricks, paper, fish, cotton and textiles made their way up and down the Squamscott in elegant schooners. The final miles were accomplished with the help of a tugboat, as the twisting nature of the riverbed made navigation difficult. On the river, the schooners faced few risks. Out at sea, the trip could be far more perilous.

The Mary Manning hauled coal for H.W. Anderson, but this wasn’t the only type of cargo she hauled. In 1900, she was carrying a full load of ice out of Bangor, Maine when she grounded at the mouth of the Penobscot River. The inquest placed the blame firmly on the tugboat Seguin, which had allowed too much towing line. The ship wasn’t badly damaged and was soon put to work again. In March of 1906, the Mary Manning left Florida with a full load of yellow pine and railroad ties headed for New York. Off the coast of Boston a gale blew up and the ship was struck by lightning. “Before the storm had reached its height a bolt struck the main boom, which broke off, carrying away the mainsail and foretopmast staysail. The vessel was swamped by heavy seas and all the boats were swept away or smashed. The schooner carried a donkey engine to hoist the sails, but a giant sea flooded the engine room, smashed the forward house, and ruined all the provisions except the canned goods,” reported the New York Times on March 7th.

The ship soon sprung a leak and the desperate crew tried to keep it afloat for 110 hours. “With two of his ribs beaten in by a shifting deckload of lumber, Ingebard Gjerteen, a Norwegian sailor, dived from the wrecked Mary Manning, a four-masted schooner, in the height of a gale on Saturday last, and saved the life of Joseph Arie of Waretown, N.J., the mate, who had become delirious and jumped overboard,” the Times continued. The ship was going down when the crew was rescued by the Casilda. All hands were saved, but their condition was “so grave that it was difficult to keep life in them.” The Mary Manning was last seen sinking to the bottom of the sea.

Anderson’s Benjamin T. Biggs didn’t fare much better. Loaded with Maine lumber for New York, she, like the Manning, hit a gale and quickly swamped. The crew was picked up 17 hours later. The Exeter News-Letter quoted Captain Tibbetts as saying, “When we left the vessel she was beginning to break up forward and at one place in the cabin floor. We had quite a rough experience. We saved only our dunnage.” Tugs were sent out to tow the ship to shore, but Anderson would find that his ship – which should have been able to recover – was destroyed by the rescuers.

By the time the wreck was towed back to Rockland, “attempt had previously been made to burn her as a dangerous derelict, and she was ablaze when picked up. As a result of this fire, which destroyed her deck and upper works, the Biggs is a hopeless wreck, and only her anchors and chains can be saved,” reported the News-Letter.

Anderson had lost one of his most dependable schooners. The following year he began hiring sturdy gundalows to haul coal. “Each year sees a dimunition in the number of small schooners and Mr. Anderson finds it difficult to charter all he needs. He has been compelled to have 600 tons of coal delivered at Portsmouth to be brought up river by his own and chartered gundalows,” the News-Letter reported.

Within two decades, most of the coal used in Exeter would be brought in by rail and freight trucks. They may not have had the majesty of the schooners, but they were much safer for the crew.
Email Post