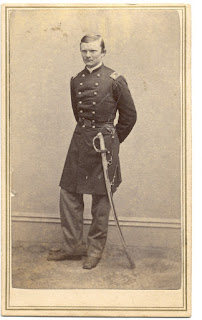 When Abraham Lincoln won the presidential election in November of 1860 there was celebrating in the streets of Exeter. The Exeter News-Letter reported, “the streets were filled with the multitude of men, women and children. The wide awakes, in uniform and with torches blazing marched through the principal streets, throwing off fireworks and giving hearty cheers as they passed along preceded by the Exeter Cornet Band, whose excellent music was frequently praised by the spectators. The bells of the several churches were ringing during the evening until 10 o’clock.”

But the celebrations were tempered within a week with threats of secession from South Carolina and Georgia. In Exeter, as in other parts of the country, the sword rattling seemed premature and uncalled for, “They know, or they ought to know, that Mr. Lincoln will not interfere with slavery in the States where it is established by law,” commented the News-Letter editor. The Constitution allowed slavery, and, as far as most Exeter citizens were concerned, it could continue to exist in those states that allowed it. Lincoln was opposed to the spread of slavery in the western territories. Why should his opposition to slavery in, say, Kansas, be cause for breaking up the Union?

As the New Year arrived, Americans were still in disbelief that the South could take such steps. “The Constitution, which all the states have adopted, makes no provision for the secession of a state, however much she may feel herself aggrieved. It is her duty to try to redress her grievances in the Union,” noted the News-Letter. “The present rebellion will probably terminate after much bloodshed, unless the government of the United States consents to let the secessionists have their own way and go out of the Union without opposition.” They worried about Lincoln’s inauguration – his election was the only reason given by the southern states for disunion.

“There is nothing of importance transpiring now, except the disunion movement which is the topic of conversation in every circle,” wrote Exeter resident B. Judson Perkins in his diary. On March 4th he noted, “This is a beautiful day. Pres. Lincoln was inaugurated today without any opposition. It was celebrated in this town by the ringing of bells and firing cannon.”

The new president made no overt moves to eliminate slavery, but the south still threatened to leave the Union. When a brief mention was made that the Exeter Town Hall had settled slightly into its foundation, the News-Letter’s editor used it to make a point – “Perhaps the basement is seceding, who knows? Gravitation admits of no compromises with her principles, and Constitutions should not. The Court would rule, that the walls should be coerced by bolts and bars; indeed this would be a decision of habit.”

When the war actually began in April, Exeter was quite clear on why it was happening: the South was in rebellion against the Union because it feared for its system of slavery. It was a Constitutional requirement that the Union be maintained, and that was what drew young men to join the army and the general population to support the effort.

“Our country has cost us too much blood and is of too much value to ourselves and to the world, to be sacrificed to a lawless band of desperadoes,” wrote a clergyman from Exeter in an open letter to the president. Elias Nason, pastor at the First Congregational Church in town, preached a fiery war sermon the week after war was declared in which he pronounced, “Down with the Rebellion! The South of this great country is on fire for war. Rebellion anarchy and ruffianism on the one hand; liberty, law and order on the other. Our nation’s flag has been insulted; our integrity broken and hatred and full defiance backed with cannon in the hands of traitors, hurled against the supporters of the law.”

New Hampshire didn’t have a trained army when war broke out and it took some time to get one organized. In late May the first group of Exeter men left town, “The volunteers who have enlisted at Exeter N.H. and been residing here for some time, left Saturday afternoon for Portsmouth. They were escorted by the Exeter cornet Band to the railroad station, and followed by the company of Students of the Academy, who have been in the practice of drilling for several weeks past,” reported the News-Letter.

The war had begun, and Exeter committed itself to preserving the Union. The problem of slavery didn’t seem to be the cause they were fighting about in 1861. Even Exeter historian, Charles Bell, titled his chapter on the Civil War as “The War for the Union”. But patriotism ran high, as this incident in the News-Letter attests, “On Thursday morning last, as a butcher from South Newmarket was stopping near the Post Office in this town, one of the soldiers lately enlisted placed a small flag, the Stars and Stripes, in the horse’s harness. This so incensed the butcher, that he took down the flag, and rent it in pieces. The last seen of said butcher he was fleeing down Stratham road at 240 speed, with about 30 of the soldiers following him.”
Email Post