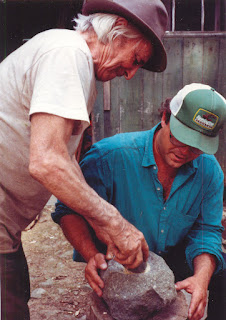 Join the Exeter Historical Society on Saturday, June 11 from 12:00 pm to 2:00 pm for the opening of the new exhibit, “The Art and Archaeology of William White”. The reception will include light refreshments and will take place at the Exeter Historical Society, 47 Front Street, Exeter. After the reception, the exhibit will be open to the public during the Society’s open hours and is free, though donations to help cover the costs of our programs are always welcome.

Born in 1916, Bill White worked on the Linden Street farms of Frank Brown and Frank Wadleigh while still a schoolboy. Here, weeding carrots or hoeing corn, he found his first “arrowhead” and a lifelong interest in prehistory was born. As a young man he collected many artifacts while working on farms in Kensington, cultivating the fields of Frank Kimball, Hibbert Baker, Sherman Shaw and others. He widened his explorations by walking or cycling to search plowed ground in surrounding communities.

These pursuits were interrupted by World War II, in which he saw combat in New Guinea and the Philippines. After returning to Exeter, Bill came to know Laurence Crosbie, then teaching at Phillips Exeter Academy and a well-known collector of prehistorical artifacts. In 1947, Bill, Laurence Crosbie and others founded the New Hampshire Archaeological Society. Soon Bill was participating in the Society’s excavations, some of which were conducted on sites that he had discovered. He shared his interest in archaeology with such friends as Mike Jenkinson and Zike Burke, both of whom became serious amateurs attending or hosting “digs”. With Eugene Finch, Bill co-authored several reports, including one on the important site at Newfields Road. In 1982, he received the Society’s highest award, the Chester B. Price Memorial Award, in recognition of his contributions to the archaeology of the state of New Hampshire.

Today, the plowed fields around Exeter where Bill collected have all but vanished, lost to development or abandoned to a returning forest, but his sharp-eyed and energetic searching has yielded a wealth of material from the area’s long and complex prehistory. His collection of thousands of pieces, each carefully marked to locality, was generously donated to the New Hampshire Archaeological Society in 2004. 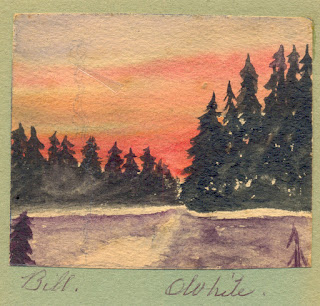 In addition to his archaeology, Bill was also a prolific artist, primarily working as a sculptor and painter. Here are two examples of his artwork. In the photo, Bill is on the left, working on a stone sculpture. The other image is one of his striking watercolors. For more information, contact Barbara Rimkunas, curator, at the Exeter Historical Society at 603-778-2335 or info@exeterhistory.org.