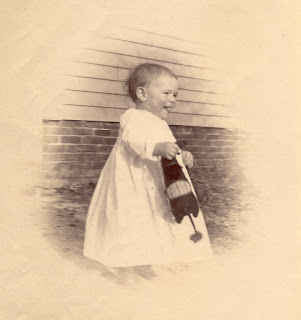 “Health authorities unite in saying that public interest is now needed to put into operation methods for infant welfare which are well ascertained and tested. The observance of a Baby Week is an expedient for securing attention to facts about the needs of babies which are well known by scientific authorities and which if popularized will greatly reduce the loss of infant life throughout this country,” so said Julia Lathrop, the director of the United States Children’s Bureau in 1915.


Lathrop was a social reformer during a period known as the Progressive Era, which stretched from the 1890s through the 1920s. During this time, social reform became governmental policy – often spearheaded by women. The reformers tackled the problems of unsafe working conditions, substandard wages, overcrowded housing, poor education, food safety and public health.

In large cities, disease and early death were endemic. Overcrowded housing and a lack of basic hygiene created a cesspool of pathogens that could easily overwhelm neighborhoods. When the Children’s Bureau was first created in 1915, there were few statistics kept regarding the health of infants because there had never been adequate recordkeeping. One of the first steps the bureau took was the creation of mandatory birth registration. The new records revealed horrifying infant mortality rates of up to 10% in many places.

Inspired by this new statistical method of gauging infant mortality and public health, the town of Exeter launched its own social survey in 1915 and found that Exeter mirrored many of the larger cities. In the previous nine years, the usual birth rate for the town was just over 100 live births; of these, anywhere from 7-14 would result in the death of the baby before the age of one. “A little child,” read the report, “should have a better chance of reaching the age of one year than he has had during the last nine years as indicated by our figures. For we do not have to contend against the conditions which make the infant mortality rate so high in the cities, where the death rate is in some cases lower than in Exeter.”

Babies died from a number of causes, including diarrhea, pneumonia and infection. The survey committee recommended draining the old tanning pits on Academy Lane. The standing water in the unused pits was a breeding ground for mosquitoes, which had recently been discovered to be carriers of malaria. They also declared that they would, “through the health officer, provide for the proper disposal of garbage and for such care and treatment of stable manure as will prevent the breeding of flies.”

It was also recommended that, “a definite attempt be made to impress parents with the importance of the subject of personal hygiene both for themselves and their children.” Hygiene lessons were introduced into the schools, but this would not necessarily trickle into the home. Although attempts were made to teach the ‘little mothers’ (or older sisters of infants), it was really the actual mothers who had to be reached and educated. This could only be done through a public campaign highlighting the importance of healthy babies.

Large cities held week-long events that celebrated babies. Exeter couldn’t quite involve as many people, but the Exeter Women’s Club was able to garner support in 1917 from the local merchants, who were more than willing to highlight their baby-related merchandise in attractive window displays. The Social Welfare Department of the Women’s Club hosted the eminent Dr. John Lovett Morse, author of Diseases of Nutrition and Infant Feeding, at a public lecture. Dr. Morse believed, “saving babies is essentially the privilege and duty of the mother. These little lives are not preserved by heroic or spectacular deeds, but by the patient, tireless devotion to routine details, hour by hour, and day by day, thus making the debt of the child to its parent so great that it can only be repaid by the same self-sacrifice to the next generation.” He encouraged breastfeeding and, aside from discouraging too much interaction with a baby, which he felt would upset it, his advice was not much different from childcare advice we receive today. Keep the baby clean. Keep the baby well-fed. Take the baby out into the fresh air as much as possible.

The Baby Week Campaign succeeded in improving conditions and survival rates for infants , even though it was held only once in Exeter. With the outbreak of the First World War the following year, people had other public efforts to attend to. The influenza struck at the war’s end and the lessons of public health became more critical as Exeter faced this crisis. Medical advances following World War II would further improve infant health, but it was the pioneers of public health – arising from the Progressive Era – who realized that the health of the individual strengthened the health of the community. Right down to its smallest members.
Email Post