When President Polk Came to Town 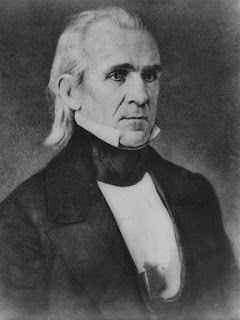 Check out Barbara's most recent column:

In July of 1847, President James K. Polk decided to take a goodwill tour of the northeast. Washington, D.C. is well known for its unlivable climate in the summer, and Polk’s Attorney General, Nathan Clifford, hailed from the breezy and cool state of Maine. The President yielded to temptation and boarded a train north.

Polk dearly needed to raise some support for his programs. Most New Englanders weren’t entirely convinced, as Polk was, that the United States’ “manifest destiny” included extending the nation all the way from the Atlantic to the Pacific. They were also highly suspicious of the on-going Mexican American War that would result in the annexation of Texas. They knew that Texas would bring with it vast tracts of slave-owning territory that would upset the careful balance of slave and free states. Still, both Maine and New Hampshire had supported Polk in the 1844 election, so it was considered friendly territory.

Whether Polk had planned to stop in Exeter is unknown. Although Rockingham County had gone for Polk in the election, Exeter had not. According to the Exeter News-Letter, “Exeter gave the largest Whig majority” in the returns of 1844.

But the election was three years gone by the time Polk planned his New England excursion and Exeter seems to have remembered its manners. Although it wasn’t quite certain whether the President’s train would actually stop, a suitable greeting was readied.

“On the arrival of the cars,” noted the News-Letter, “a national salute was fired and the bells of the several churches were rung.” This seems to have been enough to get the president’s train to stop, although the noise of the train probably drowned out the church bells. Weare Shaw, of Kensington, later remembered, “The station then was at the crossing on Front Street in a little building that spanned the track. The part on the west side of the tracks was used as a freight room.”

“The President immediately stepped from the cars to the front of the Depot,” reported the News-Letter, “where he was received on behalf of the citizens by Henry F. French, Esq. in a short and appropriate speech, and which was replied to by the President.” Judge French served in the New Hampshire Court of Common Pleas, but he has become better known as the father of sculptor Daniel Chester French, who produced Concord’s Minuteman, and the Lincoln that now gazes down from the Lincoln Memorial in Washington, D.C. Although French would later become an anti-slavery Republican, in 1847 he was a Democrat and therefore the most appropriate local dignitary to greet President Polk.

The Exeter News-Letter continued, “He then was introduced to many of our citizens who availed themselves to shake hands with the first President that has ever honored Exeter with his presence since the visit of Washington.” One of those citizens, recalls Shaw, was a crusty veteran of the southern Indian Wars and the War of 1812 named Waddy Cobbs. “Cobbs was an old soldier and could not walk, so was wheeled up on his chair and into the station, and when the cars stopped the President was then told of his being there. He came out of the cars and greeted Cobbs very pleasantly.”

Traveling with the President were a number of other dignitaries, including Henry Hubbard, the former Governor of New Hampshire and future President James Buchanan, who was then serving in the capacity of Secretary of State. They, along with Nathan Clifford, Attorney General, Edmund Burke, Commissioner of Patents and a few others, were all introduced to the crowd.

The visit to Exeter was short, lasting only a few minutes before the President’s train pulled away from the depot to continue on to Portland.

Abraham Lincoln later visited the town of Exeter in 1860, arriving at the same Front Street depot; but Lincoln hadn’t been elected President yet when he was here. There would be no other presidential visits to town until Benjamin Harrison arrived in 1889. Polk had pledged to serve only one term in office and followed through on his promise. The election of 1848 found New Hampshire men supporting another Democrat, Lewis Cass – a native of Exeter. Although the town voted heavily for its native son, the Whig candidate, Zachary Taylor, won the Electoral College. Perhaps if Taylor had made a visit to town before the election he might have fared better in the election returns from Exeter.