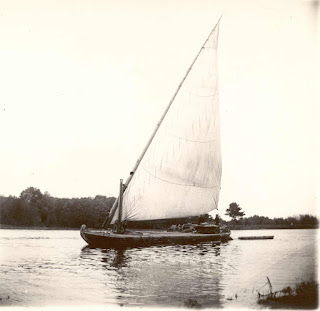 In honor of the Squamscott River Festival on Thursday, July 22, we are posting Barbara's "Historically Speaking" column on the Gundalow, which appeared in the Exeter News-Letter on July 15, 2005.

Before there were trucks and adequate highways, Exeter was a seaport by necessity. The Squamscott River provided the only reliable transportation network available – but it had some severe limitations. Originating on Great Bay, the Squamscott’s waters, like all the rivers in the Piscataqua estuary, ebb and flow with the tide. Combine this with its treacherous currents, described as “cross-grained and wily waters” by the late William Saltonstall, former principal of Phillips Exeter Academy and local historian, and one can easily imagine the difficulties involved in shipping goods up or down the river.

To tame the rivers of the Piscataqua region a new type of vessel was required. It needed to be rugged, maneuverable, and low-keeled. It had to haul heavy loads without overturning and it had to handle the shallow waters of low tide. By the colonial period, movement in the Piscataqua region was dominated by the packet – a small sturdy vessel powered by wind and tide. It was excellent for transporting people, but the keel was too deep for heavy loads and shallow water. Shipwrights began to create a flat-bottomed barge suitable for transporting large loads of lumber. By the early 1800’s, the design had been perfected to meet the needs of the region with a spoon shaped bow and elegantly rounded stern. A lateen sail was added to take advantage of wind power. This sail, on a short mast, could be lowered to pass under a bridge. A rudder and leeboard provided the maneuverability required to glide into and out of deep currents.

The gundalows were never meant to be used on the open sea, although there are a few accounts of trips made to Boston. Their job was primarily to shuttle goods between the port of Portsmouth and the inward towns of Exeter, Dover, Berwick, and Newmarket. Although similar craft were found in Maine, the triangular sail marks the Piscataqua gundalow as a vessel unique to the region. That they traveled with the tides is clear in the ledger of Joseph Fernald, an Exeter shipper who operated several gundalows from a wharf once located on the current site of Swasey Parkway. Fernald charged Exeter business men for “freighting” and noted in the ledger the goods going “down” river to Portsmouth, or “up” river to Exeter.

Captain Fernald’s busy gundalows hauled lumber, paper, furniture, and leather goods to Portsmouth on the ebb tide and returned later on the rising tide with molasses, lime, fish, candles, and rum – lots of rum. Exeter was a thirsty place before the temperance movement got going. The flat-bottomed gundalows could strand on the mud-flats and wait out the tide if necessary (not a particularly fun experience if you’re unprepared). Gundalow crews were scorned by other seamen as the lowest of their profession and schooner captain Johnson Stevens of Kennebunk was once quoted as saying, “A man that would sail a Gundilo would rob the church yard.” Perhaps all that rum was too much of a temptation when stranded on the mud flats.

Notwithstanding the good Captain’s comments, the gundalow’s crews were really able seamen considering the difficulties they encountered on their hauls. Gundalow traffic began to falter when steam powered vessels began to move barges up the rivers. By the turn of the twentieth century, gundalow traffic had all but ended on the Squamscott River.