Exeter in the Age of Polio 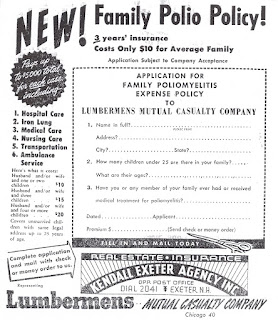 Under the headline of “Great Medical Victory,” the Exeter News-Letter announced in April of 1955, “A crowning achievement, and a milestone in medical history came Tuesday with the announcement of success for the Salk polio vaccine.” Within a week, the Rockingham County Medical Society was discussing plans to hold mass immunizations in the county. Time was of the essence; polio season typically occurred during the summer months. By late May, the first clinics were underway. “It is a tribute to the common senseness of adults that a vast majority of parents reasoned that the advantages of child inoculation far outweighed the over-publicized risks,” commented the News-Letter.

Strangely, Polio epidemics were fostered by improvements in sanitation and medical care. Transmitted by fecal-oral route, it was easily passed around among children. In earlier - and less hygienic - times, most children encountered the virus early in life. As the germ theory became better understood in the 20th century, personal hygiene took a great leap forward simply by encouraging children to wash their hands before eating. By the early 1900s, most of the fecal-oral illnesses could be prevented by simply keeping clean. But oddly, this meant that there was little early exposure to the poliomyelitis virus.

The belief that sanitary methods would save the nation continued into the 1940s and 50s. Mothers were encouraged to give up breastfeeding in favor of clean controllable bottle feeding. But bottle-fed babies do not receive their mother’s immunities, making them vulnerable to pathogens like polio. Further reducing many children’s natural immunity was the common practice of performing tonsillectomy procedures on children in the post-war period. Tonsils are the first line of defense against inhaled or swallowed foreign pathogens. In the 1950s, the connection between tonsillectomy operations and polio was noted and it was recommended that the procedure not be done during the summer months when polio outbreaks were common, but it never occurred to anyone that perhaps relatively healthy tonsils should be left alone.
Even as researchers worked tirelessly to create a vaccine for the disease, polio cases increased dramatically in the post-World War II period. The peak of the epidemic was in 1952 when 58,000 cases were diagnosed in the United States.

Exeter and Rockingham County reported numerous cases of polio in the 1950s. Even though it was still statistically a small number of children who were affected, the fear of polio was profound. Parents were advised to keep children from getting exhausted or chilled. Many towns closed public swimming pools, although Exeter had none to close. Historian Doris Kearns Goodwin, who grew up during the polio years in New York, recalled in her memoir, Maybe Next Year; “Lack of understanding about the spread of polio created a vacuum which parents and editorialists filled with a thousand admonitions: avoid crowded places where you may be sneezed or coughed upon; beware of contacts in trains, buses, or boats; keep children away from strangers; avoid swimming in cold water; don’t sit around in wet clothes; don’t play to the point of getting overtired; avoid public drinking fountains; avoid using one another’s pencils, whistles, handkerchiefs, utensils, food; burn or bury garbage not tightly covered; wash your hands before eating; call your doctor immediately if you’ve got a stiff neck, upset stomach, headache, sore throat, or unexplained fever.”

Local cases were publicized by the March of Dimes campaigns to help encourage donations. President Franklin Roosevelt’s National Foundation for Infantile Paralysis helped cover the staggering costs families faced when a member needed round the clock care and rehabilitation. Mild cases were treated at Exeter Hospital; those requiring iron lung treatments were sent to the Children’s Hospital in Boston or Elliot Hospital in Manchester. Long- term rehabilitation was done at New Hampshire’s Crotched Mountain Rehabilitation Center, which was built in 1950. The photos and news stories did a great deal to increase donations, but they also served as a source for a steady stream of parental fear in a time when there was already plenty to fear. If the increasingly frightening Cold War and atom bomb weren’t enough, polio could strike your child during the hot summer months and leave him or her as a cripple for life. Was it any wonder, then, that when a viable vaccination was created parents were quick to sign up their children?

The first mass vaccination in Exeter occurred in May of 1955. Limited to children in the first and second grade, the clinic was a cooperative effort. The Exeter News-Letter reported, “Upon arrival at the gym, accompanied by their teachers, the children were given basic medical tests by volunteer nurses and they then stood attentively in line while the classmate ahead was given the quick but nonetheless skillful and painstaking treatment by Dr. Nolan and Dr. Tuthill. Teaming up with the two doctors were Mrs. Dean J. Thorp, Jr., R. N., and Lieutenant Commander Angelica Vetullo of the Portsmouth Naval Hospital. Seven naval corpsmen provided valuable assistance by measuring the serum for the individual doses.”

There were a few more years of dangerous outbreaks; Phillips Exeter Academy delayed opening in 1955 – the first year of the polio vaccine – because of the fear of outbreaks among students arriving from Massachusetts. In 1956, vaccination clinics were opened up for all children under the age of 15 as well as pregnant women. By 1957, teenagers and adults were encouraged to get vaccinated. The development and widespread use of the Sabin oral vaccine in 1962 further slashed national polio rates. In 1964, only 121 cases of polio were reported in the entire United States. Summers filled with the fear of a dread disease were a thing of the past.
Email Post
Labels: Exeter Exeter Historical Society Exeter history polio