by Barbara Rimkunas
This "Historically Speaking" column appeared in the Exeter News-Letter on Friday, August 5, 2011.

When John Wheelwright first arrived in Exeter in March of 1638 he complained of the deep snows that he had to traverse, “it was marvelous that I got thither at that time…by reason of the deep snow in which I might have perished.” He waited a few months before sending for his wife and children so that they could make the trip more easily by boat. As she traveled up the Squamscott, Mary Hutchinson Wheelwright must have wondered about the unusual course the river took as it made its way to the headwaters at the falls where her husband was waiting.

About three miles out of town, the river took an unexpected twist to the right and just as suddenly looped back to the original path. This loop would trouble navigators for the next 250 years.

Called an oxbow, the loop is a natural formation caused by meandering of the riverbed. Sometimes an oxbow can curl all the way around stranding the land in the center. The Squamscott oxbow showed no signs of closing at the base. Its only contribution to Exeter’s busy seaport was to snarl up river traffic.

Exeter residents traveled the river in small crafts until the 1700s, when shipbuilding became an important industry in town. The river was deep enough to accommodate ships – providing they could be transported downstream to Great Bay. That oxbow, or “great roundabout” as it was sometime called, created no end of trouble. To navigate the double twists in a time before motorized engines, the crew would resort to pushing the vessel with long poles or casting the anchor forward and pulling it to get around the bends. William Saltonstall noted, in his Ports of Piscataqua, “no wind could have been fickle enough to get a boat equipped with sails through the Great Roundabout” and Olive Tardiff followed this in Exeter Squamscott: River of Many Uses, with, “Sometimes it was necessary for a vessel to wait as long as a week for favorable winds and tides in order to reach Exeter.”

By 1880, Charles Bell observed, “the navigation of the channel had become so obstructed by rocks and shoals that it was found necessary to petition Congress for an appropriation for its improvement.” The petition was granted and it was decided that instead of simply cleaning up the oxbow, it would be cut through. At the point where the looped ends nearly came together, a channel would be dug to allow a straight entrance to Exeter’s harbor.

Work began in the early Fall of 1881. Although it was nothing like the digging of the Panama Canal, it was made more difficult by an unusually hot Indian Summer. The Exeter News-Letter noted that Wednesday, September 28th was the “hottest day since July 14th.” It was muggy and already 70 degrees at sunrise. To get the miserable job done quickly, the News-Letter advertised, “It is intended to push the work of cutting off the ox-bow as rapidly as possible, and for that purpose, we are informed, employment will be given to any number of laborers from this town at $1.50 a day. As many hands as are wanted can readily be secured from other places, but the contractor prefers as far as possible to secure his laborers from this town.”

You’d think there would have been an excited and jubilant outcry in the newspapers once the oxbow was finally bypassed, but instead the news was silent. It must have been one of those satisfying, but nearly invisible triumphs – like cleaning the oven – that affects only a few and excites even fewer. Nonetheless, river traffic picked up for a time and coal schooners routinely made the trek up river.

The oxbow was still navigable by small boats after the cut was made. John Hurlbert wrote an account of a schooner trip up the Squamscott in 1897 and noted, “A short way down from Exeter there is a triple bend of the river which is called the oxbow. The river winds from shore to shore in graceful curves, but grace and utility cannot always be combined, so a few years ago there was a channel cut close to the right bank. As we sailed down between the high banks of clay we envied the little boat that flitted around the curves, dipping in the breeze like a swallow, and doubtless the occupants envied us as they put about to look at us.” 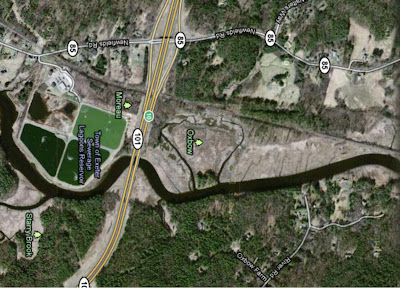 Fun, perhaps, for a small pleasure craft at the time, but today the oxbow is nearly gone. It can be viewed from above or by zooming in on Google Earth. From the river, if one is in a kayak or canoe, the entrances to the oxbow are tantalizingly broad enough to lure the paddler in. But, unless you are very adept at back-paddling, it is inadvisable to attempt to navigate the entire oxbow. After several hundred feet of pretty surroundings and tall grass the channel narrows until the kayak becomes mired in the spongy undergrowth and shallow water. The wildlife of the area will offer no assistance to the desperate paddler and will only mock you with deep throated croaking. I did get out, eventually, a tired but wiser adventurer.

The images: Top - The Squamscott Oxbow, here called “Roundabout Marsh” as seen on the 1802 Merrill Map of Exeter. The oxbow impeded the easy flow of river traffic in Exeter for nearly 250 years. Today it is almost gone. Bottom - The Oxbow today, courtesy Google Maps
Email Post