In celebration of the 20th anniversary of Shooter's Pub, we are posting this "Historically Speaking" column which appeared in the Exeter News-Letter on September 1, 2006. 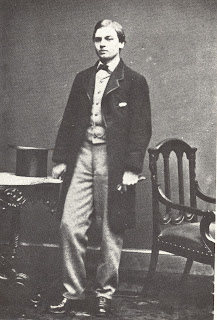 When Robert Lincoln was told his father had been nominated as a candidate for President in 1860, he was standing in a bowling alley in Exeter. “Good!” he is said to have replied, “I will write home for a check before he spends all of his money in the campaign.” He was probably hanging out in the bowling alley because Phillips Exeter Academy had forbidden the students from the town’s billiard parlors. Gambling at the pool hall was “the first big step on the road to the depths of degradation”. Bowling seems to have had only a slightly better reputation in American life.

The game itself is quite ancient and was brought to the New World by some of the earliest European settlers. By the early 1800’s it had evolved into the ninepin game that Rip Van Winkle encountered in New York State. But, like billiards, the frequent gambling that accompanied ninepins prompted most communities to outlaw the game. Enterprising bowlers simply added another pin to create a new legal game they creatively called “ten-pins”. By 1895, when the rules were standardized and the American Bowling Congress was officially created in New York City, ten-pin bowling had evolved into a wholesome national game.

However, in New England and the eastern provinces of Canada, ten-pin bowling had been overtaken by a quirky variation called candlepin bowling. Created by a bowling alley owner named Justin White in Worchester, Massachusetts, candlepin bowling is played with smaller balls and tall lanky pins. The rules of candlepin bowling vary from ten-pin in that three balls are played in each frame and dead pins are not removed from the field of play. Most candlepin bowlers will tell you that it’s a much more challenging game to play then ten-pins, which is another way of saying it’s harder. My own experience on the Exeter Hospital bowling league in the early 1990s would back this up, famous as I was for the “three gutter” frame and an overall average of about 45. 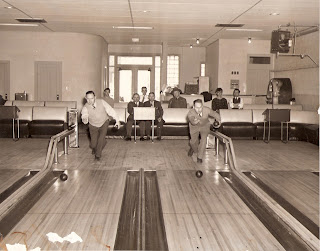 We played at the Exeter Bowling Lanes on Columbus Avenue. Built in 1946 by Frank Wentworth and originally called the Exeter Bowling Alley, the business is now celebrating its 60th anniversary. Designed before automatic pinsetters were developed in the 1950s, the pins were originally set up by teenagers called pinboys. Automation arrived just in time for the golden age of bowling in the 1950s and 60s. Father and son, Mike and Rob Ficara, have owned the Exeter Bowling Lanes since 1986. During this time, there have been more major changes – one of the most significant was when the facility went non-smoking. Shooter’s Pub was added in 1991 and the old grill was removed from the bowling area.

Bowling continues to be a popular sport in Exeter. Fall leagues will be forming soon with divisions for kids, seniors, men, women, mixed and competition. Rob Ficara says that some of the most exciting bowling in Exeter was when the New Hampshire State Tournament was held at the bowling alley from 1995 – 2000. It would have most certainly been more exciting than the game Robert Lincoln played back in 1860. At least Robert was able to find a lane – his father, also trying to kill some time that day, found that the bowling alley in Springfield was filled to capacity and he was turned away.
Email Post