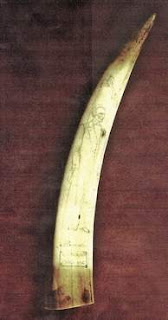 To some it may be an unusual way to commemorate history, but to William Markey it's the perfect way to make use of an elephant tusk that has been in his family for more than 70 years.

With the help of a scrimshaw carver from New York, Markey is using the two-foot-long tusk to commemorate Abraham Lincoln's 1860 visit and speech in Exeter.

The tusk will be engraved with Lincoln's image and will have the date of his visit to the town on it.

Markey is hoping to present the tusk as a gift to the town upon its completion this fall.

Markey said the tusk once belonged to his father and was just sitting around his Newmarket home. Because ivory dries up, he knew he needed to do something productive with it when he started to see cracks developing. "I wanted to do something good with it, something the family could be proud of," he said.

The 77-year-old's love for history and Lincoln helped to inspire the idea, along with an article written in a civil war magazine that talked about Lincoln's 1860 visit to Exeter and other Granite State communities.

"I figured I got a story, an idea and a tusk that I don't know what to do with," he said.

Markey said the article he read put great emphasis on the importance of Lincoln's visit to the state in 1860.

"I went through the schools in Exeter and then went to school at UNH (University of New Hampshire) and not a breath was uttered about Abe Lincoln's visit to Exeter," said the Newmarket resident.

His visit to the state went a long way to winning over the support of seven of the state's 10 delegates four months later during the Republican convention in Chicago, Markey said.

New Hampshire, which was mostly a democratic state at the time, eventually supported Lincoln in the presidential election. "New Hampshire had an important say in Lincoln's election," Markey said.

Markey later contacted the author of the article he read, Ron Soodalter, who is also an accomplished scrimshaw artist, about his tusk idea.

Soodalter is currently working on the tusk in New York.

Markey expects the tusk to be finished in September, at which point he plans on giving it as a gift to the Exeter Public Library.

Markey and Soodalter are still working on ideas for mounting the tusk and the display case. Markey said the tusk should be in a glass-enclosed case for the proper protection and kept at the correct humidity to avoid cracks.

He is also currently examining insurance options for the tusk, so it's insured in case of an unexpected loss.

Exeter Public Library Director Hope Godino said the library plans on accepting the tusk as a gift and would likely display it on its adult services floor for awhile before moving it to the historical collection area.

Markey is hoping to have a presentation ceremony when the tusk is complete.

Markey is a retired Air Force officer and once survived a jet bomber crash in 1961 that killed three of his co-pilots.

Article appeared in the July 29, 2011 issue of the Exeter News-Letter.
Email Post