"Exeter in Perspective" by Nancy Merrill, appeared in the Exeter News-Letter, January 28, 1971


“Start at the Bandstand…” begins many a direction given by an Exeter resident to either a newcomer or a passing motorist. What is this Bandstand? When was it built? What story does it have to tell?

Some accounts of Exeter say it was built in 1913, others say 1917. One way to find out is to look in the old News-Letters, but more important -- first ask the town clerk, Evelyn Zarnowski, who keeps a little book of the most frequently asked questions.

Looking under “B” for Bandstand or “S” for Swasey Pavilion, she finds that 1916 was the year; then you are referred to the town records for 1916 and find that a special town meeting had been called for a Saturday evening. John Templeton read the resolution as is recorded in the town records and also The News-Letter for Jan. 14, 1916: “The citizens of Exeter, in a special town meeting assembled, hereby accept the offer of Mr. Ambrose Swasey to beautify the Square by erecting an ornate Pavilion therein, and the town clerk is directed to convey to Mr. Swasey, a loyal and distinguished son, the deep appreciation of the Town of Exeter for his beautiful gift.


“And the Hon. Edwin G. Eastman, the Rev. Dr. S.H. Dana and the hon. Albert S. Wetherell are hereby appointed a committee to act with the donor and architect in the erection of the Pavilion and in locating a new granite watering trough, also the gift of Mr. Swasey, in such place as seems advisable.”

Subsequent perusals of The News-Letter reward the reader with the following weekly observations:

May 5 -- The Swasey Pavilion
“The material for the marble pavilion which Mr. Ambrose Swasey is to erect in the Square as a welcome gift to his native town has been shipped. The work will begin upon its arrival and will be completed before July 4.”

May 12 -- Work on Swasey Pavilion
“Work preliminary to the erection of the Pavilion in the Square, the welcome gift of Mr. Ambrose Swasey began Wednesday when the fountain was removed to a site at the Town Hall corner. There it is intended to place it in temporary operation.
“On Wednesday also began the digging required for the Pavilion foundations. At a depth of four feet was found a deep layer of oyster shells. The trusses and other steel material was hauled to the Square yesterday.
“As announced, the Norcross Brothers Company, Worcester, Mass., is the contractor for the work of erection.”

May 26 -- The Pavilion
“Much has been done this week on the Swasey Pavilion. The three courses of Milford pink granite which constitutes the ashler have been set and nearly all forms for beams of re-enforced concrete which will support the platform are in place. The granite curbing around the space which will form a grass plot is being set. Delivery of marble is being made.”

June 9 -- Work In The Square
“The marble floor of the Pavilion is nearly laid and the laying of curbing around the enclosure has begun.
“The base of the granite drinking trough has been set in deep foundations of concrete and the water main from the opposite side of the Square has been laid. The base, a fine block weighing nearly seven tons, was put in place by Contractor Irving W. Brown without the use of a derrick.”

June 23 -- Town Affairs
“The last marble column of the Pavilion in the Square was set Tuesday and the last stone of the architrave Wednesday. The placing of the steel roof trusses in position was then begun.”

July 7 --
“At the initiative of Mr. Edward E. Norwell and with consent of the Boston and Maine, the fountain which until recently has stood in the Square will at once be placed on railroad land beyond the freight house and slightly back from Front Street. There it should do good service.”

July 14 --
“The Pavilion floor is receiving its finishing touches, beautiful mosaic work around the central bronze plate. The roof has received its copper covering, with pine cone finials and several lion heads as gargoyles to discharge rain water. (During our recent cold weather, several of the lions looked as though they had icicle goatees.) The material for the mosaic ceiling, shipped a fortnight ago and delayed on the way, arrived yesterday.”

July 21 --
“The ceiling of the Pavilion is completed save for a narrow stripe around the border, which is partially filled in. The design and color effect is eminently pleasing. The grading contract has been awarded to Mr. C. Charles Hayes, who will begin work as soon as possible.”

July 28 -- Town Affairs
“On Tuesday the Norcross Brothers Company, Worcester, Mass., completed its work upon the Pavilion and Mr. C. Charles Hayes finished the grading around it. Stripped of staging the Pavilion reveals a beauty that compels admiration. Approval of the architect and delivery to the town have yet to be made. The beautiful bronze chandelier for electric lighting made to special design, should be delivered early in August. It is hoped to have the dedication on a day when the generous donor, Mr. Ambrose Swasey can be present.”

It did indeed rain that Wednesday evening, August 9.

The “next fair evening” proved to be August 10, when many gathered in the square to thank Mr. Ambrose Swasey for his “sumptuous gift to his birthplace.” “It was said” that Daniel Chester French got his idea from a pavilion in the gardens at Versaille.

The dedication was largely attended. Hon. Albert S. Wetherell, of the committee which had supervision of the erection, presided. Its other member, Rev. Dr. S. H. Dana, made a felicitious address. It will be recalled that in the summer of 1915 no little curiosity was aroused by Mr. Swasey’s visit to the Square with a distinguished son of Exeter, Mr. Daniel Chester French, and Mr. Henry Bacon, of New York, one of the country’s most eminent architects. Alluding to this visit, Dr. Dana outlined its results and devoted much of his address to the notable trio. Greeted by hearty cheers and applause, the public-spirited donor then presented the Pavilion keys to the selectmen, with acceptance by Chairman Clarence Getchell. Music by the Exeter Band completed the programme. 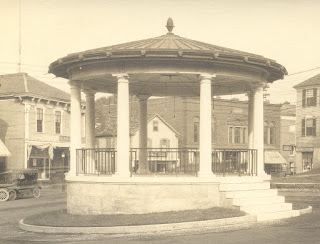 “The Pavilion is of exquisite beauty. Upon deeply laid foundations of concrete rest three courses of pink Milford granite, which constitute the ashler. Then comes a course of white marble, from which rise eight graceful columns of marble which support the marble architrave. The steps are marble. The floor is of re-inforced concrete, with marble surface save for the central bronze plate showing the zodiac, especially fitting in view of the donor’s interest in astronomy, and the encircling mosaic work. The enclosing railing and gate are of bronze.
“The mosaic ceiling, in its design and the rich colors of its central sunburst and delicate tracery, is a gem. From its center hangs a bronze chandelier of pleasing design, with eight arms pointing to the columns. There are electric lights at the extremities of the arms and a ninth pendent from the center.
“There is much ornamental work in the copper roof, notably the 16 gargoyles, lions’ heads, and the pine cone finial.
“About the Pavilion is a narrow plat which turfed Monday, enclosed by granite curbing, and around this is a finely paved border.
“Mr. Swasey’s gift also includes a granite watering trough set at the west side of the Square.”
“As the above implied, the architect was Henry Bacon, of New York, and Exeter is fortunate in the possession of a sample of his work. The principal contractor was the Norcross Brothers Company, Worcester, Mass. (According to Perley Gardner, this company had done larger jobs, but none any better.) The chandelier was made to special design by E. F. Caldwell and Co., Inc., New York, and the electric wiring was done by C. Fred Fifield, Of Exeter, C. Charles Hayes did the grading and turfing.”

The News-Letter of Sept. 15, 1916 shows a picture of the bronze plaque in the floor of the Pavilion. There is the “conventional sun in the center and a border formed of the signs of the zodiac. The first of these plaques was made for the Swasey Observatory at Denison University, O. The second and third are in scientific buildings in China. This one in Exeter is the fourth. It will reward a close inspection. The marble floor itself is of artistic design, and the mosaic ceiling is one of the most beautiful in the country.”

Unknown said…
Great post! Thanks for the excellent article.