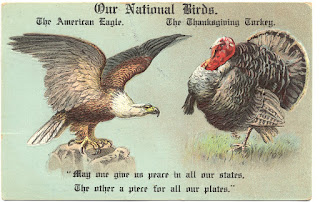 The latest "Historically Speaking" column appeared in the November 26th issue of the Exeter News-Letter.

We don’t know when Thanksgiving really got started in Exeter. Generations of Native Americans lived here long before written language began creating a reliable record. There were probably days set aside to acknowledge the bounty of the harvest, and these were most likely joyous.

Thanksgiving didn’t officially become a fixed holiday until 1863, when President Abraham Lincoln placed it on the fourth Thursday in November. Before that time, individual states got to decide when it would be observed. The basic traditions of Thanksgiving, like the food served, haven’t changed much over the years. Elizabeth Dow Leonard, when writing about her Exeter childhood in the early 1800s, recalled, “A Thanksgiving dinner of the olden time baffles description. It was anticipated for weeks, and preparations for it were on a scale of stupendous magnitude. Such choppings and poundings and apple parings and raisin stoning as were heard throughout the length and breadth of the land were never known on any other occasion. Such havoc among fowl and stalled oxen, such exhibitions of every kind of pastry that the soul of woman ever conceived!“

The feast was the task of women. Except for possibly applying a hatchet to the neck of the unfortunate turkey, the menfolk did what they did best in the kitchen – basically nothing. While the women were hard at it for a week in advance, their husbands and sons simply waited until the big day when, to their minds, food fell from the sky onto their plates. This probably explains why it was so difficult to find any accounts about the day in the early editions of the Exeter News-Letter. Aside from cookbooks and a few memoirs written by women, the preparations are wholly unregarded. Elizabeth Leonard dryly commented that after this, or any other feast, the men, “when they had taken a sufficient quantity of wine, paid us with some complimentary toast, spiced according to the number of glasses drunk.” Thanks, honey.

In earlier times, Thanksgiving Day was preceded by “begging night”. Henry Shute grew up in town in the 1860s. He remembered, “It was a custom in those days which I am glad to say is practically obsolete today, at least in Exeter, for the children of the lower classes to spend the early hours of the night before Thanksgiving in going about the town begging for Thanksgiving supplies. The housewife of the well-to-do class would be called to the door and would find there a boy or girl who would greet her with the time honored request, ‘please gimme suthin’ for Thanksgivin’.”

In Elizabeth Leonard’s day, the practice was heartily accepted, although she did describe it as “a carnival to the giver and the recipient.” It was viewed as an extension of the holiday and, “flour, sugar, fowls and money were freely given, and to the better class of the poor, pies and other luxuries were sent, so that when we sat down to our own abundant table, we felt we had contributed to help every poor person’s table in town who would accept our offerings. People who never asked charity at other times were not ashamed to ask and receive from the abundance of God’s Harvest at Thanksgiving.” Preparing for the onslaught of the petitioners could be quite a task. She recalled, “I have known my poor mother to make seventy pies to eat and give away!”

Fifty years later, begging night still persisted, although there was some cheating going on. Henry Shute commented, “This custom was regarded rather tolerantly by the good people of Exeter, and was not looked upon strictly as begging by those who regularly indulged in it, but rather as a fascinating game of chance. Indeed it was by no means an uncommon thing for children of the better classes to yield to its fascinations and, evading the vigilance of their maternal guardians, to solicit alms with a persistence that in any good cause would have been most praiseworthy, and a fertility of prevarication that was appalling.” If the tricksters were caught there were harsh penalties to pay. By the twentieth century, begging night was no longer part of the Thanksgiving tradition, having moved to Halloween.

Even our current frustration with Thanksgiving travel has a long history. In 1850, when Exeter was still new to the railroad age, the Exeter News-Letter noted, “The 3 o’clock train from New York, over the New York and New Haven Railroad on Wednesday, P.M. was made up of fifty-two cars. A moderate allowance of passengers for each car would give about 3,000 persons to this single train, nearly all of whom, doubtless, were going home to Thanksgiving.” If that doesn’t seem like a lot of people, keep in mind that in 1850 the population of the entire town of Exeter was about 3,000 people. Imagine cramming our whole town on a train nowadays.
Email Post
Labels: Exeter Exeter Historical Society Exeter history Henry Shute History of Exeter Lincoln Plupy Thanksgiving