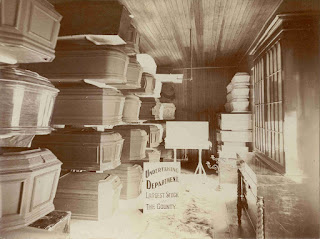 The latest "Historically Speaking" column appeared in the October 29th issue of the Exeter News-Letter.

When Exeter’s large cemetery on Linden Street was created in 1843, it was designed to be park-like – a place one might stroll through on a warm afternoon. It was a far cry from the stark graveyards of earlier times. Funeral rites and furnishings had changed considerably since the town’s settlement in 1638 and the new cemetery reflected some of those changes.

When John Wheelwright and his small band of Puritan dissenters first arrived in Exeter, the necessary graveyard was located near the meetinghouse, somewhere in the vicinity of Salem Street. The grave markers of these earliest residents are gone now. Most likely, they weren’t marked well and when the new meetinghouse was built in the center of town, the graveyard was abandoned.

Not that it would have been a pleasant place to visit. Puritans considered one’s mortal remains to be relatively unimportant. Death brought with it a frightening uncertainty about a loved one’s eternal soul. No one knew whom God had elected to salvation or damnation and this terror of the grave was reflected on the carving that can still be viewed on older headstones. A quick walk through the Winter Street cemetery will reveal numerous examples of the “winged death’s head” – a cold reminder of man’s mortality – on the stones. The people buried are never “beloved” or “dear”; in fact, the men are never described at all, they’re just a name with dates attached. Women are nearly always attached in some way to a man. She’s a “widow of,” “wife of,” “consort of, “or even “relict of,” someone else. Rarely is she her own person, even in death.

Children- and there are a startling number of children buried in the Winter Street cemetery- are treated the same way as adults with the same type of headstone art. Children weren’t sheltered from death; it was all around them. When one of their playmates died, the children were part of the funeral rite and frequently carried the coffin of their friend to the graveyard. This was done to remind them of their own mortality. They didn’t fool around back then.

Over time, the harshness of the Puritan worldview began to melt. The flying skull softened into a winged cherub and later an urn and willow took the place at the top of headstones. By the time the Exeter Cemetery was laid out, there were no more harsh symbols to be found. Funeral practices and care of the dead began to change as well.

When James W. Field opened his undertaking business in Exeter in 1895, it had evolved into a specialized field. In previous decades, the dead were simply washed and laid in a crude homemade coffin in preparation for burial. In the United States, the Civil War changed this practice.

During prior wars, fallen soldiers were simply buried where they’d fallen. It was a rare, and usually wealthy, family that was able to retrieve their dead. Admiral Horatio Lord Nelson, who was killed at the Battle of Trafalgar, was famously preserved in a cask of rum until his fleet returned to London. But his treatment was rare. More often, soldiers’ remains were returned years later after temporary internment. By then, there was little left but dried bones.

During the Civil War, the railroad allowed quick transportation for the fallen. It was quick, but not quick enough to fend off the obvious effects of decomposition. Ice proved to be impractical for a trip of several weeks, so surgeons began to use various concoctions to preserve the body long enough for the trip and subsequent funeral. Formaldehyde wasn’t discovered until after the war, so these early embalmers tried other substances such as arsenic, creosote, mercury, turpentine or alcohol. It’s no wonder that the embalming profession itself had a high mortality rate. As crude as the practices were, grieving families were grateful to have their loved ones returned home and embalming became nearly standard practice in North America.

With this greater care of dead came a desire for more elegant coffins. The traditional shape, six sides tapered at the shoulders, gave way to a rectangular casket that looked more like a piece of fine furniture. The field specialized as a branch of cabinet-making, which was why James Field’s business was “Fine Furniture and Undertaking.” Today we’d never think of going to a furniture store to pick up a casket, but it didn’t seem morbid at all in 1900.

Although some funerals were still held in private homes in the early 1900s, the advent of the funeral parlor made the practice less common. Caskets ceased to be sold in furniture stores, so you could no longer browse through stacks of them while shopping for a new dining room set. Field’s Undertaking services ceased to be listed in Exeter’s business directory by 1920, and by the 1940s there are almost no home funerals listed in obituaries. Death had become quite separate from the everyday world of the living.
Email Post
Labels: Exeter Exeter Historical Society Exeter history History of Exeter