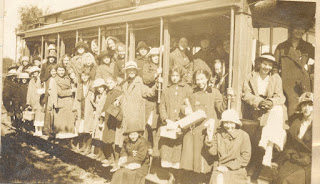 This "Historically Speaking" column appeared in the Exeter News-Letter on October 15, 2010.

The Exeter Historical Society and American Independence Museum recently hosted a field trip of over 100 students from the Cooperative Middle School. As we put them through their paces; writing with quill pens, identifying map features, transcribing impossibly hard documents and analyzing features of puzzling artifacts, the day was a reminder of the value of field trips. They’re not some new idea invented by helicopter parents who want to give their kids an ‘enrichment’ experience. Field trips have been around a long time.

In 1914, the Exeter News-Letter reported that “Miss Elizabeth H. Baker last Friday took her Seminary Class to Salem, Mass., to inspect places of historic interest. This was her 18th trip.” Although she wasn’t an English teacher, perhaps the Salem trip was meant to counter the prevailing opinion then (as now) that some of the classroom reading was a tad dull. “We are reading House of Seven Gables,” Seminary student Louise Tyler wrote in her diary in 1910, “I hate it.”

Young Helen Tufts recorded the same exciting excursion in her diary, “My class went to Salem on special car. Ate lunch on the train! Visited all sorts of historical places. Got back at 5:30.” Considering she didn’t mention which ‘historical places’ she visited, it’s easy to conclude that the trip’s highlight was lunch.

Maybe a better strategy was to give the students an actual assignment while on a field trip instead of a vague ‘inspect places of historic interest.’ The first and second year students took Nature Study as their science class. Every fall, they’d head out into the wilds of nature to take notes and study the flora and fauna of New Hampshire. Emma Kimball kept her school notebook and it now belongs to the Exeter Historical Society. In penmanship that is enviable in an 11-year old, she wrote notes about the “cricked” and “muscrates.” “Crickeds,” she wrote, have “feelers longer than the whole body.” Her teacher, Miss Maud Jewell, who’s dual teaching roles of nature study and penmanship (Palmer Method) may account for the quality of Emma’s notebook, encouraged the girls to get outside. Emma had a list of “Things to do in the Fall,” which included: “Learn to stand still; Go in every variety of weather; Don’t expect to find all the animals in a row; Use your ears and your eyes; Go raccooning; Go cacooning”

After being prepped in this style, the girls went on a Saturday afternoon field trip to Fort Rock Farm. Starting at the Seminary on Lincoln Street at 10:30, they headed north towards Forest Street and there enjoyed some fresh water from the jailhouse spring. “The water here was refreshing and after filling our bottles and cans we prepared for a long march into the woods .” They reached Fort Rock at noon and, after a quick lunch, went on to the ledges - a granite outcropping with a pool of water below. Although some of the girls went climbing, others stuck to the task at hand, “They used the nets for dredging the pool and found many interesting (things). While some of us finished our lunch, the girls were bringing us tadpoles, polliwogs, frogs, common leeches, back swimmers and American newts, - these last are easily confounded with lizards, but they had so smooth a skin, we could readily see they differed from the scale-covered lizard.” They captured a garter snake and Emma noted, “The girls of our class did not scream and run at the sight of a snake – for that is unreasonable.”

The following year, the class ventured to Hampton Beach on the streetcar on a Tuesday. “The weather was lovely, although it was the coldest September 29th that had been known in thirty-one years,” Emma wrote. They scoured the beach for specimens finding sea urchins, starfish and sand dollars in great abundance. But it was the crabs that the girls found most intriguing. “At first we could scarcely tell where the head was, but we noticed the position of the eyes and that settled the question. Walking, as they do, forward, backward, and even sideways with equal ease, it seems as if they, too, might be slightly puzzled about their formation, and so, not stopping to decide which part is intended to go foremost, they dart off on a venture, and in the oddest manner possible.”

Emma’s observations make us realize how important field trips can be. They get you out of the classroom for a while and perhaps out of one’s comfort zone. Field trips can make you brave even when you’re a little scared, whether it’s a slithery snake or a crazy historical society curator wielding an 1812 musket with full bayonet attached. The experience itself links together the sights, smells and textures of a different place – different from a classroom or computer screen – and that, in itself, is the value of a field trip. Even if the best part is lunch.
Email Post
Labels: American Independence Museum Exeter Historical Society Exeter history History of Exeter Robinson Female Seminary