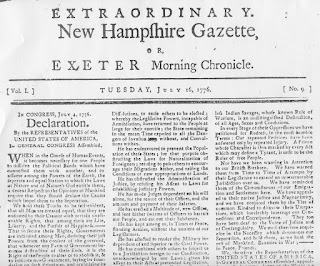 The latest "Historically Speaking" column appeared in the November 12th issue of the Exeter News-Letter.

In 1776, when most American colonists were considering independency, Exeter printer Robert Luist Fowle found himself in something of a quandary. The capital of New Hampshire had been moved from Portsmouth to Exeter, and there would be plenty of printing work for him. But he really wasn’t comfortable with the idea of breaking away from Great Britain. Whether this was common knowledge to the people of Exeter is unknown, but certainly it would cause problems if he didn’t keep his mouth shut.

Robert Luist Fowle had apprenticed with his uncle, Daniel Fowle, in Portsmouth. Daniel had been an able printer in Boston until he was arrested in 1754 for the publication of a pamphlet entitled The Monster of Monsters, which was critical of the government of Massachusetts. Daniel’s brother, Zachariah, had been the true engineer of the piece, but Daniel bore the brunt of punishment. Upon his release, he left for Portsmouth, fed up with the Massachusetts government and firmly dedicated to the idea of freedom of the press.

In Portsmouth, Daniel and Robert Fowle printed together, founding the first newspaper in New Hampshire, The New-Hampshire Gazette. But by 1775, the two men had a falling out concerning politics; Daniel firmly planted on the Patriot side and Robert leaning toward the British Loyalists. The schism caused the break-up of the printing firm. Robert took one of Daniel’s presses and set up shop in Exeter. There he began publishing his own newspaper, The New Hampshire Gazette or Exeter Morning Chronicle. With his political inclinations under cover, he was able to settle amongst the rebellious Exeter townsfolk with little notice.

Exeter was a smaller town than Portsmouth, and Robert Fowle found it necessary to take what work he could find, even though it might mean printing items that went against his own politics. New Hampshire declared itself independent of Britain in January of 1776 with the adoption of its new constitution. Exeter, as the new capital, was now a hotbed of the rebellion.

On July 16, 1776, Robert Luist Fowle printed a special edition of The New Hampshire Gazette, or Exeter Morning Chronicle, containing the full text of the newly approved Declaration of Independence. John Dunlap’s original Philadelphia printing of the document had recently arrived in town and Fowle had rushed getting it to press. He printed it within his newspaper and then as a separate broadside. One can only imagine what was going through his mind as he set the type. As a loyalist, or “Tory,” he would have been quite uncomfortable with the idea of revolution against Great Britain. Historians have estimated that 15 – 20% of the American colonists were loyalists, but in New England the numbers were much lower.

The only edition of Fowle’s New Hampshire Gazette or Exeter Morning Chronicle in the collections of the Exeter Historical Society was printed in August of 1776. In it, he prints an act passed by the Committee of Safety of New Hampshire to prevent the forging and altering of Bills of Public Credit – the paper money issued by the state. The publication of this act becomes ironic when, in early 1777, Fowle is arrested on suspicion of forging paper money.

The evidence against him was strong – there were no other printing presses in Exeter and Fowle had received the commission for printing paper money from the state. Thrown into Exeter’s notoriously permeable jail on Chestnut Street, Fowle offered to name the other conspirators if he were given bail. As the court was considering this offer, he slipped away and escaped behind British lines, most likely remembering the words he himself had set to type concerning the punishment for forgery: “every person so offending…shall be punished by being set on the gallows for the space of one hour, with a rope round the neck, and pay a fine for the use of this colony, not exceeding fifty pounds, and suffer six months imprisonment, and be publickly whipped, not exceeding thirty nine stripes, and be incapable of holding any office under the government of this colony, or shall suffer all or any of the foregoing punishments in the discretion of the court.”

Fowle’s brother, Zachariah, took over the Exeter press and continued, unmolested, throughout the war. Robert returned to town around 1790 after Zachariah’s death. He married his brother’s widow and became a merchant downtown. Although he received a loyalists’ pension from the British Crown, Fowle still felt the need to demand repayment for the pamphlets and paper he’d lost when his printing shop was looted. Eventually, he felt it best to move, with his wife, to Brentwood where she had inherited some land. It was there that he died in 1802, having lost his trade, but kept his principles.

Robert Luist Fowle’s printing press now stands in the museum room of the Exeter Historical Society. As an artifact of the American Revolution it is an odd accident of fate that it is a British press, used to print the Declaration of Independence by an American Tory. A rare copy of this broadside will be up for auction at the Skinner Auction House in Boston on November 14th.
Email Post
Labels: broadside Declaration of Independence Exeter Historical Society Exeter history History of Exeter printing Robert Luist Fowle