This "Historically Speaking" column appeared in the Exeter News-Letter on Friday, June 21, 2013. 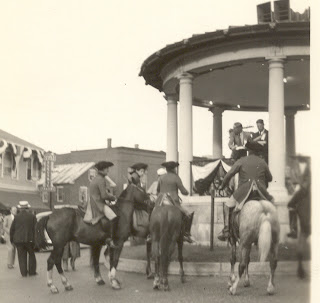 Exeter used to be much larger. When Reverend John Wheelwright first organized the town in 1638, he wasn’t too certain where the actual boundaries were, so he drafted two separate deeds to sign with the native Squamscotts. Over the course of the next 150 years, the town shrank to its current size as portions of town petitioned to secede.

Back in Wheelwright’s day, everyone in town had to pay taxes to both the town and the parish. There was only one church with only one meeting house. Whether you subscribed to the particular denomination or not, you still had to pay for the church, the minister and the minister’s upkeep. This was no small requirement considering the town church often functioned as the town government. However, they were required to attend church services – a difficulty if you happen to live on the outskirts of town. Schlepping in for Sunday services in the dead of winter could be a huge project in an era before there were halfway decent roads.

Newmarket was the first part of Exeter to request a separation. The meeting house was simply too far away for most people and it had become a problem. It was only eight miles away, but that was quite a trek by horse cart. In 1727, they petitioned the town of Exeter to be allowed to form their own parish. Exeter approved the separation – but continued to charge taxes for municipal expenses until 1737, when the Provincial Legislature granted Newmarket complete town privileges.

Of course, there were two parts of Newmarket in 1727. There was the Newmarket we know today on the Lamprey River and the portion known as ‘Newfields’ on the Squamscott River. These separate parts of town had separate post offices, the Newmarket branch and the Newfields branch, which was called ‘South Newmarket.’ When the two towns separated in 1849, Newfields, for simplicity sake, called itself ‘South Newmarket.’ It continued to be called South Newmarket for the next 26 years. All the men who served in the Civil War from the town are listed as being from South Newmarket. Finally, in 1895, the town officially changed its name to Newfields after the will of Dr. John Brodhead gifted the town $10,000.00 to buy books for a public library – but only if it changed its name officially to Newfields.

Far in the northwest corner of Exeter was a heavily wooded area. To encourage settlement, the town gave away woodlots to anyone willing to move there. In 1741, the people in this part of town voted to ask Exeter to let them form into their own town. Named for Epping Woods in England, Epping – the self-described ‘center of the universe’- was granted township rights in early 1742. Theirs was a peaceful and uncomplicated separation. The same cannot be said for Brentwood and Fremont.

Brentwood asked to leave Exeter at about the same time as Epping. Like the other towns, the difficulty of getting to the Exeter meetinghouse and the requirement to pay Exeter taxes were cited as reasons to become independent. Exeter had no real objections to allowing Brentwood its freedom, and it was granted separation in June of 1742. But within the town of Brentwood there was discontent. The new town was still too large – at least it was according to the people who lived in the western part of town. They repeatedly cranked about the new Brentwood meeting house being too far away and in 1744 declared themselves to be a separate town – Keeneborough.

But Keeneborough was never legally incorporated as a town. Brentwood continued to assess taxes on the residents, who appealed to the Governor and the Provincial Council in 1748. The fight was then thrown to the local minister, Nathaniel Trask, who managed to calm everyone down and reunite the two squabbling factions. The illegal charter was thrown out in 1750 and Keeneborough ceased to exist – if it had ever existed in the first place.

But the people of the defunct Keeneborough could not be kept quiet. In 1757 they again petitioned to separate from Brentwood and again were denied. In 1763 they tried to join the town of Chester, when this was refused; they tried to join Epping, which wisely refused to get involved in the dispute. Finally, in 1764, Brentwood decided the recalcitrant part of town was too much trouble to keep and snapped the leash free. The new town named itself ‘Poplin’ for reasons that are unclear. Even within the new boundaries, there were still some rebellious folks. In 1765 the northern part of Poplin tried, unsuccessfully, to join with Epping.

The request was again denied. Epping was happy being Epping and didn’t need a cousin Oliver to mix things up. Poplin patched up its internal differences and unified to become a town. Except no one really liked the name ‘Poplin.’ In 1853, they almost changed their name to ‘Lindon’ but thought better of it. Finally, the following year, riding high on the exploits of John C. Fremont – a western adventurer who had no ties to Poplin or New Hampshire – the townsfolk voted to change the name to ‘Fremont’ and thus it has been ever since.


Photo Caption: June 30, 1938 – Couriers on horseback are dispatched from Exeter to the towns of Newmarket, Epping, Brentwood, Newfields and Fremont inviting them to participate in Exeter’s 300th Anniversary. All these towns were once part of Exeter.
Email Post

Unknown said…
The name Poplin is much nicer than Freemont. I always wondered why they changed their name, and thank goodness Keeneborough didn't win-out!
June 24, 2013 at 6:24 AM

Claire said…
While living in Fremont, we didn't know it had once been part of Exeter. Nor did we know it had once been called Keeneborough. With all the issues over where the kids would go to high school, it seems that pattern of wanting to join other towns is still occurring. We knew it was once called Poplin. Glad it finally landed on the name Fremont.
June 24, 2013 at 8:38 AM