This "Historically Speaking" column appeared in the Exeter News-Letter on Friday, June 7, 2013.

Lumber was so important to Exeter’s early residents that it was used in place of money. It was common for debts to be paid in barrel staves. So it’s no wonder that people considered trees the most valuable asset in town, considering they grew here for free and were, in the words of one historical society volunteer, “like thousand dollar bills sprouting from the ground.”

To the British government, New England’s towering pine trees were perfect for masts on his majesty’s naval vessels. In 1705, an Act was passed reserving the largest trees for the King’s Navy. A Surveyor General was appointed to locate any trees measuring larger than 24 inches at one foot from the base. These trees were then marked with three strokes of a hatchet that produced a pattern called the broad arrow. Locals were not allowed to cut these huge trees, the work was done by a local contractor who would find a crew to cut the tree, trim it and haul it to the nearest port. The contractor was also in charge of producing or improving long straight roadways to transport the trees. Exeter, like many towns, had a road that was called the “Mast Way” (later called “Lane’s End” and “Katy’s Lane,” today the old Mast Way is Park Street).

New Englanders resented the act and most would at some point just get fed up and cut the tree down. The boards cut from it would be milled down to less than 24” in width; the owner made a small fortune and no one was the wiser. At least, that’s how things went for nearly 40 years. No one asked a lot of questions.

But there’s always that one guy – probably the same one who used to ask the teacher if there was any homework – who couldn’t shake the feeling that someone somewhere was getting away with something. That man, in 1734, was the Lieutenant Governor David Dunbar. Dunbar was also the Surveyor General and he was convinced (probably rightly) that the people of Exeter were cheating on the 24 inch rule. He trudged out to the Copyhold Saw-mill in a part of Exeter that would later become Brentwood. While he was on the road, the local lumbermen caught wind of his plans and greeted him with shouts and gunfire to scare him off. Dunbar made a hasty retreat, fearing for his life.

More convinced than ever, he returned to Portsmouth and hired a motley gang of ten men to sail up the Squamscott to do his dirty work. They arrived on the evening of April 23rd, checked into Simon Gilman’s tavern on Water Street and began drinking the night away. Loosened up with ale, the men bragged about their errand. Gilman then told them that the local men had taken up a collection and hired some Indians to murder Dunbar and two of his associates as soon as they left in the morning for the Black Rocks mill. Gilman was bluffing, but they didn’t know that. 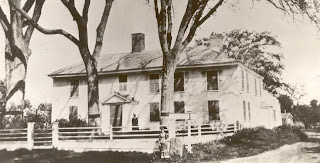 Meanwhile, the local men were meeting at Gidding’s Tavern over on the Mast Way. Dressing unconvincingly as “Indians,” they made their way to Simon Gilman’s tavern and attacked the Surveyor General’s frightened and intoxicated men. According to his deposition taken the following day, James Pitman swore under oath that, “about thirty men broke into the room and put out their candles and did then and there beat us and dragged us about and at length got us to the head of the chamber stairs and pulled us down one over another headlong ‘till they got us to the door and pulled us out then with a club did knock him down upon the ground giving him several blows with which was in great danger of his life having received several wounds and lost a great deal of blood.” Joseph Cross testified to Justice of the Peace John Penhallow, “that he was knocked down with a club, otherwise abused, and his life threatened; that he got away and hid behind a fence until morning.” William Stiggins and William Tarrat stated, “that hearing the cry of murder they got out of the house and mixed with the crowd, escaping thus from injury.” Benjamin Dockum ran as fast as he could and hid under the wharf for the night. Joseph Miller told of being “pulled out of the house and after that they took him by the arms and legs and dragged him to the bank where there was a pile of boards over which they threw him and down the bank about fifteen foot, by which he received a great hurt in his back, where he lay ‘till next morning being afraid to be seen again least he should be murdered, but being hard of hearing could not understand their discourse afterwards.”

The only one to escape entirely was a man named ‘Negro Peter’ who said he was forewarned and kept out of the way. The Surveyor General’s men never made it to the Copyhold mill or the Black Rocks mill further up the river in what is Fremont today. The accounts of the Mast Tree Riot may be somewhat exaggerated – most likely so – but who could blame the men who wanted to make it abundantly clear that they had reason to avoid setting foot in Exeter ever again. Dunbar must have been furious, but he also was well aware of the neighborliness of annoyed Exeter lumbermen.
Email Post