We the People – Checking the Census

This "Historically Speaking" column was published in the Exeter News-Letter on Friday, July 3, 2020.

The deadline for the 2020 census has been extended thanks to the coronavirus pandemic. Considering a decennial census is a constitutional mandate, you would think this might be a problem. However, the census has been flexible with regards to deadlines for over two centuries. Occasionally, the date has been moved around, so extending the June 1st, 2020 deadline should not cause much trouble.

An accurate count of the population is necessary for effective governance. We apportion representatives in both the state and federal government based on these numbers and funding for schools, hospitals and housing are dependent on the results as well. But the census isn’t a simple process. As Ted Widmer recently wrote in the New Yorker, the census, “has always reflected the promise and prejudices of our country, and its story drives to the heart of the Constitution – indeed, to its very first three words. Who are we, the people?” 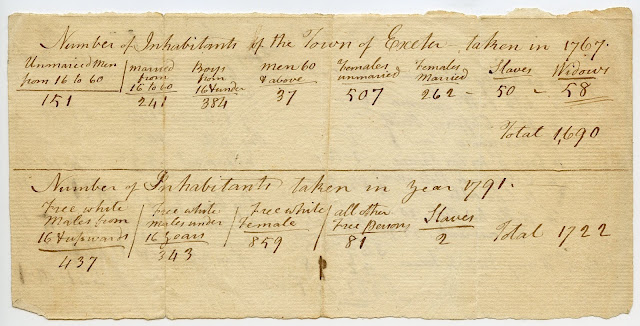 The first U.S. census was taken in 1790. It took eighteen months to complete. U.S. marshals were tasked with counting “all the people” but, of course, some of those people didn’t count. Enslaved people were counted as 3/5ths of a person and indigenous people weren’t counted at all. The 1790 census of Exeter lists 1722 people living in 287 households. A household consisted of the head – generally a man, but sometimes a widow, with a breakdown of male and female members by age and race. For the first few enumerations, age was listed in a bracket – “free white males over the age of 16” – for instance. “Free white females” of any age might be lumped together because, why worry about non-voters really? “All other persons” was the euphemism for the free Black members of society, who’s ages and genders weren’t deemed important to enumerate. In 1790, there were still 2 enslaved people living in Exeter. There were 81 free Black people counted in town living in 14 households.

Before the Revolution, Exeter had counted people at least twice, in 1767 and 1775. The population in 1767 was 1690 citizens and 50 slaves. In 1775, just before the war, there were 1703 citizens and 38 people listed as “negros, slaves for life.” The 1800 census revealed that there were still eight enslaved people living in New Hampshire, but none of them lived in Exeter.

The 1850 census made a big breakthrough (at least to researchers) by listing names and ages of each individual. Responsibility for the census moved from the State Department to the Department of the Interior. Trained ‘enumerators’ were tasked with gathering information instead of US marshals. Questions about education, real estate and place of birth were added. The number of questions would increase with each subsequent census, peaking in 1940 when most participants were asked 34 questions, but an unlucky 5% had to answer 16 additional pieces of information. The questions enumerators asked, which can easily be looked up online, used the language and biases of the day. Today, the US Census website cautions that some of the terminology – particularly regarding race – would be inappropriate to modern researchers. Racial categories included W- white, B – Black, M – mulatto and, introduced in 1860, C – Chinese. In 1890, ‘octoroon’ and ‘quadroon’ were added for perceived scientific reasons that would later be criticized for contributing to the eugenics movement. In any case, it was difficult to determine who fit into these categories. Enumerators made such a hash of it that the two designations were removed in 1910. In 1960 the census began allowing people to self-report their race.

For the historian, or the genealogist, the questions, and their inconsistencies over time, can make research difficult. Several years ago, a genealogist contacted the Exeter Historical Society requesting help with a puzzling problem. Her great-grandmother’s name popped up in one of our articles about African Americans and she was trying to follow the family tree back to find this woman. When we went back to the census, her ancestor was listed as Black, Mulatto and White in different years. Her children, mixed-race by today’s standards, are listed as mulatto or white, depending on the enumerator.

For many years, the census asked about birth and nationality. In the early part of the republic, these questions were used to track mobility. If a significant number of people in Ohio were born in New England there was some inward migration going on. Immigration was unregulated in the 19th century, so questions of citizenship, language and place of origin were included. These were the statistics that the historical society used to research our own immigration history. There were surprises we had not expected. The population of the town was primarily English, Scottish and west coast African in 1800. Population numbers began to swell mid-century at the same time the industrial revolution was firing up. It was long presumed that Irish and French-Canadian immigrants were attracted to Exeter to work in the mills. Instead, the census showed us that, although people from these two groups did move into town, industrial jobs were closed to them. Irish and French-speaking immigrants worked as low-level day laborers and domestics for a generation while better paying factory jobs went to native-born white people or workers recruited from Great Britain.

Census records become public after 72 years – an amount of time that seems to be based on lifespan but was actually created quite arbitrarily. The next data set to be released, the 1950 census, will be in 2022. Like the 1940 census that was released online in 2012, it will not be indexed by name at first. You’ll need to search by location. As for the 2020 census, with only nine questions, it won’t take you very long (maybe one commercial break) to complete. Most of us spend more time, and have given away more private details, on social media.