This "Historically Speaking" column was published in the Exeter News-Letter on Friday, July 31, 2020.

Dr. William Perry once said of the annual potato harvest, “In the fall of the year, when the crop was brought in, the street would be lined with oxcarts, waiting their turn to unload. I think it was said that some men gathered four hundred bushels to the acre; we never heard of the rot in those days, and I know we had very fine potatoes for the table.” Most of the potatoes, however, were not destined for the dining tables of Exeter. Perry’s father, also named Dr. William Perry, purchased thirty to forty thousand bushels of potatoes each year for his starch mill.

The elder Dr. Perry arrived in Exeter in 1814, with the ink still wet on his Harvard diploma. His father had hoped to pass the family farm in Norton, Massachusetts, to William, but the boy was indisposed to farming. Grudgingly, he’d been allowed to take up the practice of medicine. The country was at war with Britain when Perry set up his practice on Water Street and his first two patients died. It wasn’t a spectacular beginning to his long career (he would serve as a town physician into his eighties). After the war, the nation began an unprecedented period of industrialization. Cotton textile manufacturing, long held in a stranglehold by Great Britain, spread to New England’s swift running rivers. Perry, who was a bit of a tinkerer, was asked by an associate if he could come up with a better, cheaper way to produce starch for the mills in Lowell. Local legend tells us that Dr. Perry invented the process of making starch from potatoes, but this appears highly unlikely. People had been using potato starch for a variety of uses for decades and there were other potato starch mills in other parts of the state. Dr. Perry’s mill began operations in 1825. 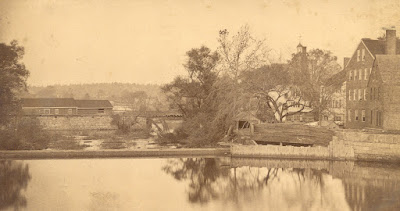 Starch was used in several processes of cotton textile production. The warp threads on the loom – the ones that are static – need to be smooth and strong while the weft threads whiz back and forth to produce the weave. Treating these fibers with starch or gum, a process called sizing, made the resulting fabric stronger and smoother while retaining the lightness that attracted consumers to cotton fabric. Industrial production of cotton, begun in Britain, had been using imported gum for the process. Mill agents in the United States were eager to reduce the need for foreign imports and tariffs. Potato starch and gum would serve the purpose quite well, thank you.

Starch was also used in the dyeing and printing of cotton fabrics. The bright calicoes that Americans craved required dyes that needed to be stabilized. According to the younger Dr. Perry, most of his father’s potato starch was used for this purpose. “On Pleasant Street my father built a mill for the manufacture of potato starch, about the first of the kind in this country. The product was sent almost wholly to the mills in Lowell, though the starch served for household use also. I think no other kind was then made. The bags of starch were hauled to Lowell by horses, the team making the journey twice a week. The manufacture of British gum was after a time added to this industry. Up to this time it had been imported, but the agent of the Merrimack Print Works at Lowell asked my father if he could not make it. He experimented until he succeeded, and he sold it to them for many years. It was used principally in thickening the dyes of the Print Works.”

Merrimack Print Works grew to be a massive operation. It was probably still small during the years Perry supplied potato starch, but by 1850 the firm was producing 40,000 yards of dyed fabric per day. Their specialty was ‘madder colors’ – dyes that were various shades of red derived from the Rubia tinctorum herb. The bright colors were hard to resist in an industry full of earth tones.

Perry built his mill on the east bank of the falls between the two dams. The process required a great deal of water for boiling and evaporation. The interior must have been unbearably hot and humid. As he had a thriving medical practice to attend to, Perry left the daily operations of his mill to Benjamin Lang. Lang had been born in Lee and was still a young man in his late twenties when he took control of the mill.

Twice the mill complex burned. In 1827, the Rockingham Gazette, gave some column space to the fire – a practice it rarely did for local events – to report, “Our citizens assembled with great promptness, and, by their exertions, prevented the fire from extending farther. Dr. Perry’s loss must be considerable; but we have no means of ascertaining its precise extent. His machinery had been brought with much care and ingenuity to a high degree of perfection, and its entire destruction is much to be regretted.” Perry rebuilt after the fire. The mill itself was wood, although Perry’s son noted, “the large brick house next to this was built by my father principally to provide another cellar for his potatoes, as he had to have room for many thousands of bushels.”

The potato starch mill continued to be profitable for several decades. Perry’s son doesn’t tell us when his father finally decided to end the endeavor. In both Perry’s obituary and the family genealogy, it is implied that, having failed to file a patent for his process, it was stolen by an unscrupulous character from New York. The mill “was profitable, and would have been more so, had the doctor taken the precaution to secure a patent. A man from central New York, where potatoes were cheaper than here, came to Exeter, spied out the process, and soon undersold him.” Nevertheless, the factory seems to have been operational long after the 1830 fire. Lang continued to run the mill through the mid-1840s and the buildings are still labeled as belonging to “Dr. Perry” on an 1860 map. Fourteen years later, however, the buildings have been replaced by tenements erected by the Exeter Manufacturing Company. Today, these buildings have also disappeared, removed for the creation of Founder’s Park when the public library was erected in 1988.

In the collections of the Exeter Historical Society, there is one photograph that has buildings that match the description given to us by the younger Dr. Perry. Taken some time between the 1850s and the presumed removal of the buildings in the early 1870s, it was taken by a photographer standing on Great Bridge looking toward the String Bridge. The cupola of the Exeter Manufacturing Company, to whom Perry sold his water rights in 1831, can be seen peeking over the trees from its location below the lower dam. The two buildings on the far right are those built by Dr. Perry during a time when the arrival of fall brought a parade of potato-filled oxcarts to the downtown of Exeter.