This "Historically Speaking" column was published in the Exeter News-Letter on Friday, June 7, 2019.

At the 1883 annual meeting of the Union Five Cents Savings Bank in Exeter, the slate of officers and trustees elected were unsurprisingly all men with one exception – “Miss Sarah C. Clark was elected Secretary and Treasurer in place of Frank P. Cram.” So unusual was it to have a woman elevated to this position that the Exeter News-Letter felt compelled to add, “Miss Clark has been connected with the bank for several years as clerk, is thoroughly conversant with its business, and will make a competent, trustworthy and efficient Treasurer.” Indeed she did, holding the position for the next 27 years.

Clark’s early life gave no indications that she would one day become a respected member of the banking business. She was born on a farm in Stratham to Benjamin and Elizabeth Clark in 1843. The Clarks had six children, but only three survived to adulthood: Sarah and her older siblings John and Mary. John, as the eldest and only son, was sent to Phillips Exeter Academy at the age of 14. Sarah and Mary, being girls, attended the Exeter Female Academy, a precursor to the Robinson Female Seminary. Often written off as a finishing school for fine ladies, the Exeter Female Academy did provide some excellent academics for its time – including a mathematics program that taught arithmetic, algebra and geometry. Sarah and Mary attended fall and winter terms for three years. The school insisted on strict standards, including, “pupils should be at least twelve years of age.” Mary had to have been exceptional, because she entered just after her 11th birthday.

Once they were finished with their education in Exeter, the Clark children prepared for their adult lives – John went to Manchester to read law with an uncle and Sarah and Mary went home. Society and tradition dictated that women remain at home until marriage. Mary had weak lungs, so it was presumed she would be the one to stay with their parents. Sarah may have had other aspirations, but our records are silent about her ambitions. John became a lawyer, married and practiced in Exeter. The 1870 census finds Mary and Sarah, both in their late 20s, living at home in Stratham “without occupation.” John, perhaps tiring of the legal profession, rode the new wave of civil service reform brought about by the Chester Arthur administration into a job in government, moving his family to Washington D.C. His obituary would later describe it as “a responsible post in the Treasury Department,” although the official register of civil service lists him as a clerk in the third auditor’s office. Still, this was a respectable occupation. At about the same time that John packed his small family to the capital, Sarah decided to take a job away from the family farm.

The Union Five Cents Savings Bank had been incorporated in 1868, one of many “five cents” savings banks designed to encourage workingmen to use and trust banks. With a minimum deposit of only five cents instead of the usual dollar, these banks were specifically tailored to be local and without the usual fat cat investors that had caused so many banks to fall to over-speculation in antebellum years. The bank treasurer was responsible for day to day operations including managing cash flow, employees and budgets. Clark also made recommendations about the bank’s investments and financial objectives. Sarah’s quick elevation to this position was a big deal. In 1894, the New York Sun took note of Clark and New Hampshire’s strange affinity toward allowing women in areas of finance. “New Hampshire has three women bank treasurers, including a Miss Clark, who has been elected to her responsible place for the tenth consecutive time. The business of the bank has largely increased under her administration, and her good judgement in the placing of loans has resulted in her being made a member of the investment committee.”

In 1881, before she became the bank treasurer, Sarah, along with her sister Mary, made another decision and bought a piece of land on Lincoln Street. Written into the deed was the provision that the sisters must, within six months’ time, build a two-story house, “to be at least equal in architectural finish and attraction to any dwelling house now erected on said Lincoln Street.” The sisters complied and made Exeter their permanent home. Sarah happily joined the Congregational Church, the Women’s Christian Temperance Union, the D.A.R., the Renaissance Club and the Music Club. Mary, too, thrived in Exeter but her weak lungs caused her early death at age 40. John retired from government work and split his time between New Jersey, where all three of his children had settled and Exeter. When he was in town, he lived with Sarah. 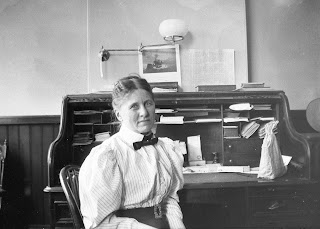 The Exeter Historical Society has a photo of Sarah at her desk in the Union Five Cents Savings Bank. It seems to have been taken in the 1890s, when Sarah was in her fifties. She sits upright, as a proper Victorian woman would, her eyes looking directly at the camera. Her day is about to begin – the desk still clear of paper, yesterday’s mail in tidy slots, her thrifty brown bag lunch hasn’t yet been tucked into a drawer. The Union Five Cents Savings Bank was in good hands. Sarah Clark may have been the first woman in New Hampshire to serve as a bank treasurer, but she wasn’t the only one to hold the position in Exeter. In 1910, the same year Clark retired, Lillian Brown became the treasurer of the Exeter Cooperative Bank, a position she held for 41 years – far surpassing Clark’s time at the Union Five Cents Savings Bank. Her story will have to wait for another day.

Image: Sarah C. Clark was the first woman to serve as a bank treasurer in New Hampshire. Elected to the position at the Union Five Cents Savings Bank in 1883, she served until her retirement in 1910.
Email Post