Life on the Moon Teases Exeter Residents in 1835

This "Historically Speaking" column was published in the Exeter News-Letter on Friday, June 21, 2019.

This year’s New Years’ resolution is “always know where the moon is.” Admittedly, the simplest way to do this is with a phone app, but the real reason to undertake moon watching is to force yourself to look up. Look up and away from the ground. The moon is a knowable solid truth during a time when such things can seem hard to find. You can always depend on the moon. A son of Exeter, Dudley Leavitt, who described himself as a “teacher of mathematics and other branches of useful knowledge,” began publishing an almanac, called “The New England Farmer’s and Scholars Almanack” in 1797. In it, the cycles of the moon are carefully charted to keep farmers apprised of the planting seasons and tides. People were well aware of where the moon was back in earlier times.

The Exeter News-Letter, our town’s faithful old newspaper, was first published in 1831. As newspapers go, it was a fairly typical New England newspaper. The front page was filled with sermons, poetry, agricultural advice and “anecdotes” (The September 9th, 1835, edition features “Anecdote of a Hen,” which tells a charming story about a hen that teaches ducklings to swim). The next few pages carried news items from around the world, the nation and the state. These were all reprinted from other newspapers in a system of reciprocity. The News-Letter had arrangements with a wide variety of publications across the country. Sometimes, an article would be reprinted sequentially from an earlier reprint in another paper, almost like playing ‘telephone,’ only with a more reliable paper trail.

Then, as now, some news sources were more reliable than others. In large cities, such as New York, the rise of cheap daily newspapers, printed on half-sheets of paper, began to plague the legitimate press. Selling for a mere penny, these papers thrived on stories of exotic or scandalous nature – often with a small germ of truth at the center. In late August of 1835, the New York Sun ran a series of six articles, purportedly reprinted from a Supplement to the Edinburgh Journal of Science, about “Great Astronomical Discoveries Lately made by Sir John Herschel.” Herschel, a well-known astronomer, was in South Africa continuing his studies of the solar system and eagerly awaiting the arrival of Halley’s comet, which was due to appear in the fall. Unknown to most American readers, however, the Edinburgh Journal of Science had ceased publication several years earlier. However, these two components of the series gave it a bit more gravitas than the usual penny press yarn.

The first two installments, as told to the reader by Herschel’s assistant, Dr. Andrew Grant, describe the magnificent telescope – with a lens “twenty-four feet in diameter” with a “magnifying power 42,000 times.” Herschel’s intent was to turn the telescope to the moon. “It was therefore presumed to be capable of representing objects in our lunar satellite of little more than eighteen inches in diameter.” With this, the story reported that the moon’s surface was “greenish brown” and covered with “a dark red flower, ‘precisely similar,’ says Dr. Grant, ‘to the Papaver Rhoeas, or rose-poppy of our sublunary cornfields.’” The moon, it seems, was filled with plants, forests, lakes, beaches. And where there is abundant plant life, there must be animals! Herschel’s telescope revealed bison-like creatures and blue unicorn goats. They were similar to their counterparts on earth, except for a fleshy brow that served as a visor to “protect the eyes of the animal from the extremes of light and darkness to which all the inhabitants of our side of the moon are periodically subjected.” The third report expanded on the lunar wildlife. There were mini-zebras, pheasants, and beavers that walked upright and carried "its young in its arms like a human being.” Like beavers on earth, lunar beavers excelled at building, although rather than erecting dams and dens, these upright walking beavers built huts with fireplaces. The shorelines were lined with palm trees bearing crimson flowers but no coconuts. “The cliffs along these shores were deeply undermined by tides,” read the copy, but before the reader was able to ponder how there could be tides on the moon – governed by - wait, doesn’t the moon govern tides - it was time for the most unbelievable part. 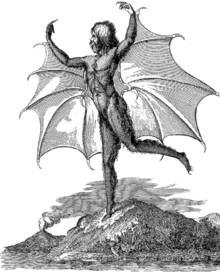 Man-Bats. The moon was inhabited by creatures called “Vespertilio – homo” or “man-bats.” There were several species, which, matching the general racism of the day, varied from short, dark creatures to taller, lighter ones. All had the same furry exterior with transparent wings used for locomotion. Just at this point, the telescope was damaged by fire and Dr. Grant decided, after repairs, to let the public wait for Sir Herschel’s final report. Did the public believe this wild story? Apparently some did, with a few missionary societies planning ways to bring religion to these newly discovered beings. Eventually, it was revealed that there was no Dr. Grant working with Sir John Herschel. Hershel himself was amused by the entire thing, although he was irritated about being ceaselessly asked about man-bats. The writer of the piece was the New York Sun reporter Richard Adams Locke, although he never completely admitted to it. His motive may have been parody, or perhaps outright plagiarism of an earlier work by Edgar Allen Poe.

But what of the Exeter News-Letter? Exeter’s new, yet respectable, SIX CENT, paper had to address the issue. Without a reciprocal agreement with the New York Sun – something to which editor John Gerrish wouldn’t stoop – the News-Letter could only describe the articles. Gerrish did his best to provide details – “diverse other beauties too numerous to be mentioned were subjected to the scientific inspection of the learned astronomer and his moonstruck admirers. But what renders these discoveries more especially interesting is the decision of the important question; is the moon inhabited by rational beings? Large parties of men and women were discovered and distinctly seen; but the distance was still so great that although they were evidently, and, (especially the ladies) earnestly engaged in conversation, it was impossible to determine in what language they spoke.” However, if Herschel is indeed writing a book about the Luminarian’s customs and habits, “and when we ascertain the titles of their leading newspapers, we shall send them, via the Cape of Good Hope, a copy of the News-Letter with the customary endorsement, ‘Please exchange.’”

Gerrish didn’t seem to give in to the story. He discussed the controversy and the theories of authorship and concluded, “On questions of this importance, it becomes a village editor to adopt the non-committal policy, and gather instruction, if he can – he must, at any rate, be amused – by the sage discussions of his brethren of the cities. We, of course, hazard no opinion upon the authenticity of the wonderful discoveries that have been announced; but, in justice to the periodical in which they were first published, we must be allowed to say that the SUN has done no more than its duty in throwing its light upon the Moon.”

Image: An 1835 image of life on the moon. Jim Lovell, 60 miles up from the moon’s surface in Apollo 8 described it differently: “The moon is essentially gray, no color; looks like plaster of Paris or sort of a grayish beach sand.”
Email Post