This "Historically Speaking" column was published in the Exeter News-Letter on Friday, August 31, 2018.

On days when the Exeter Historical Society is open to the public, we spend a lot of time assisting genealogists. As we page through the notebooks filled with vital statistics – births, marriages, deaths – there’s a huge increase in the entries as soon as we hit the mid-twentieth century. A HUGE increase. Where there had been one or two pages of births, suddenly there are five or six or ten. A lot has been written about the baby boom that followed World War II – here’s the Exeter story.

After the war was won, the editor of the Exeter News-Letter expressed concern about a postwar slump in the economy. During the war wages had been high and unemployment unknown. The Exeter Lions Club had stopped giving out Christmas baskets of food because they couldn’t find any needy families. The past had taught us that there was usually an economic blow following a war and everyone feared another depression. “The familiar figure of speech used in the Bible describes the transition from peace to war as ‘beating swords into ploughshares.’…but the phrase has outlived the centuries. A new version might be ‘turning bazookas into washing machines.’ It required a mighty effort to build up our shipyards and convert our factories to war production. Our success in doing this is now an obstacle to re-conversion. We must be patient.”

Infrastructure in town was in a sadly neglected state. Another editorial worried about the town “slipping.” During the war, “materials and labor for repairs to buildings became difficult to obtain. It was held a civilian participation in the war if a property owner dispensed with avoidable repairs. It was patriotic to let things slide.” Taxes would be high. Things needed to be fixed, but an unanticipated problem was looming.

Exeter’s population had been dropping in the early part of the century. There were 4,923 residents in 1900 – a number that was helped along by a rush of immigrants. But by 1920, the population had dropped to 4,604. 1916 recorded only 54 births in town. High child mortality took a toll on population as well – in 1926, there were 168 live births, but 18 children under the age of 5 died that year. Except for smallpox, there were no vaccines for most childhood diseases in this pre-antibiotic period. In 1945, measles, chicken pox, scarlet fever and whooping cough were prevalent enough in the schools that the Exeter News-Letter published reminders to parents to combat infection.

But during the war, something strange started to happen. The birth rate began to rise. In 1940, there were 259 recorded births in town. In 1944, there were 397. 1946 saw 496 births and 1947 recorded 587. For a few years, it seemed like just a quick ‘keep the home fires burning’ kind of blip, but it soon became evident that couples were happily procreating at unheard of rates. These new families put a strain on resources as the town had to deal with sudden growth.

The Baby Boom of 1946 – 1964 swaddled all those kids with generous veterans benefits for their families including educational grants and low housing loans. Housing developments sprang up all over town. It was during this period that Jady Hill, Colonial Heights and Winter Heights were developed. The Jady Hill area, developed by Hollis Associates of Hampton, built 40 cape and ranch houses in 1950. More housing was built on Folsom Street, Ridgecrest Terrace, Rocky Hill, Sleepy Hollow and the Allen Street neighborhood off Portsmouth Avenue.

By 1950, the schools were in panic mode due to over- crowding. A new elementary school was erected on Lincoln Street to accommodate all the children. In 1955, the boys and girls high schools merged. The 1955 report of the School Board announced, “For many years, this report has been a ‘cry in the wilderness,’ for various solutions to our serious problem in education, namely the definite lack of space for pupils. With the construction of the Exeter High School and the Elementary School nearing completion, the citizens of Exeter can very well be proud of their efforts.” The postwar school population jumped from 838 children in 1947 to 1455 in 1960 – and these numbers didn’t include the children attending St. Michaels parochial school. 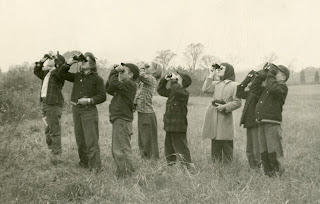 The same kids needed some kind of entertainment. In an effort to ward off the usual ‘mischief night’ activities around Halloween, free movies were shown at Town Hall supported by the local downtown merchants. Little League baseball arrived, only for boys of course, in 1952. Girls weren’t allowed to play until 1974, when Melissa Thayer became Exeter’s first girl allowed on a Little League team. A town Recreation Commission was created in 1965.

Young families wanted the washing machines. They also wanted refrigerators (there were only a few homes that still used an ice box in the early 50s), cars and television sets. A new kind of shopping – self-service supermarkets – began to appear as the commercial district of Exeter moved from the downtown and Lincoln Street to Portsmouth Avenue. The town finally purchased the Exeter Water Works in 1950, although it would take another decade before a waste water plan that didn’t involve dumping sewage into the Squamscott River would be enacted.

The years of the baby boom were at times chaotic – there was no planning board until 1957, for instance – and often resources were scarce. The Boomer generation was able to keep up with its needs. As population shifts, we must be able to adapt to the world we inhabit. Here’s hoping Exeter will keep up with whatever the future holds.

Photo: The post-war baby boom of 1947-1964 swelled Exeter’s population of young people. Here a group of boomers formed the “Junior Audubon Club.” The photo, from the Exeter Historical Society collections, is labeled “What kind of bird is THAT?”
Email Post