This "Historically Speaking" column was published in the Exeter News-Letter on Friday, August 3, 2018.

“A.E.F. France, July 29, 1918. Dear Percy,” began Lt. Leon Hilliard, “This is some paper from the pack of a dead German, whom we killed in the second battle of the Marne.” Local men serving abroad in the Great War continued to write to friends and family, who allowed the letters to be published regularly in the Exeter News-Letter. Most had only arrived in France during the winter and by summer of 1918, the realities of war began to sink in. 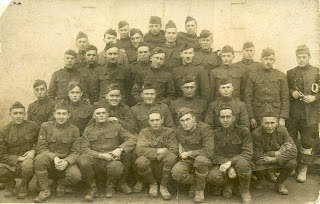 Private Herbert Barker wrote with news the Town had already received, “Young Pingree, who drove the express wagon in Exeter, has been killed by a shell. He is buried here, not far from where we are located. He was in my regiment.” Almon Pingree, who worked for American Express in Exeter, was 24 when he died in April. The American Legion post in Exeter would be named in his honor. Barker continued, “We expect to move again soon. We are on the go all the time, but we are getting used to it now, and the boys take it all in good part.”

France was a mystery to New England men. “All the houses here and in England are built of stone or brick and some of them have straw roofs. Every house about here has beer or wine. The people drink wine instead of coffee or tea,” wrote Sergeant Joseph W. Demasky. French drinking habits astonished the relatively temperate Americans. “The people use liquor the same as we use water. The cafes all have tables outside right on the sidewalks and here one may sit and see everything going on. Not only men, but women and children as well. It seems funny to us to see women drinking right in plain sight of everybody, but it is the proper thing here,” commented Howard Carter. Exeter’s restrictive liquor laws had kept their hometown dry since 1903, so public drinking was a novelty.

Buying alcohol, however, proved difficult. “All the people here talk French,” a flummoxed Demasky noted while in France, “we have hard work to make them understand what we want, but we get it just the same.” He gained an appreciation for his fellow soldiers who, having parents from Quebec, spoke the language. “The fellows who speak French get along fine and we take some of them with us to do the talking for us. What little French I learned at school now comes in handy. This is true life. Some of the words are awful jaw breakers, believe me.” Daniel Novelle was suddenly grateful for his background, “I can understand French well, but am taking French lessons now.” This allowed him to communicate well and make friends with local people. “I have several families here in this town who use me well. One old lady does my laundry, and if I don’t go and see her at least three times a week she gives me fits. She has lost two sons in this war, and another boy and girl were taken from her by the Germans and killed. Gee, they tell us some pitiful stories.” Daniel Shaw was serving with the Canadian Reserves and he seemed a bit jealous. “There are many French Canadians in our command and they have great times chatting with the natives.”

It took over a month for Edwin Hobbs of Hampton to get a letter to his family. Serving with the 103rd regiment of Field Artillery, he described the German Spring offensive: “We were in the heaviest fighting the Americans have taken part in and we fired all through a terrific barrage of high explosives and gas that the Huns threw at us. It was hell in all its phases. Imagine rushing out in a gas mask with lenses so clouded with your breath that you can hardly see anything, and shells falling all around you! I can tell you it gives one a funny feeling around the pit of the stomach and makes the knees mighty wabbly. I was scared, I can tell you, but after we commenced firing the feeling wore off. I got some gas in me, for I tore off my mask to see where I was, but I am all right now.”

“July 14th is a holiday with the French, with us too this year,” wrote Hilliard. “At just twelve, midnight, there came on us the severest bombardment of high explosive and gas shells that the Germans had ever used in the war. It lasted 5½ hours, all of which we had to keep on our gas masks. Then came the attack. The Boche expected to find us all dead. He got the surprise of his life, so in place of advancing six miles the first day as he had planned sunset that night found thousands of Germans dead within a mile of the Marne. The 38th Infantry is the only regiment, either French or American, that didn’t fall back.” Hilliard was later awarded a Silver Star for leading his platoon that day. As summer turned to fall, most of the men no longer thought of war as a great adventure. “I’ll never come any nearer to having a Hun bayonet stuck into me than I was there,” wrote Hobbs. “At present I am an awful looking object – ragged, powder and grease stained clothes, no underwear – and need a bath. Gee, I’ll be glad to be clean again.” Carter wrote, in October, “The boys here all dread the coming winter more than they do the whole German army. We’re camping out in small tents, two in a tent, in a small forest, and aside from being shelled once or twice a day, everything is as quiet and peaceful as in dear old Exeter. But we are moving up again in a day or so and things will be different.”

Image: American Servicemen in France in 1918. Standing 2nd from the right (with a mustache) is Exeter’s Dean Thorp Sr. Thorp returned from the war to work for the Exeter News-Letter. Civic minded, he served seven terms as a town selectman.
Email Post