This "Historically Speaking" column was published by the Exeter News-Letter on Friday, May 6, 2016. 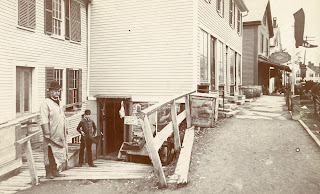 Of course, people used to walk a great deal more than we do today. Walking was how one got around town and did the marketing. But the walking wasn’t always that great. “The mud is ankle deep,” lamented B. Judkins Perkins in March of 1860, politely not mentioning that the roadway was a mix of mud and manure. Perkins lived a mile outside the center of town, he wouldn’t expect there to be any kind of sidewalk out in the sticks. Exeter’s business district was slightly better for foot traffic. Providing a safe and clean walkway for customers was considered necessary for the merchants of the town.

The first sidewalks were probably constructed of wood. Individual shop keepers constructed boardwalks to prevent people from tracking in too much crud from the street and, as they were raised higher than street level, to serve as a barrier for road traffic. You might think that a horse would know enough not to crash into a shop window, but you’d be wrong. Horses and oxen often went out of control. Wagons had only the most rudimentary brakes and sleighs had none. Keeping road traffic away from pedestrians and buildings was very important.

The downside of wood, of course, was that it needed to be repaired and replaced often. In some parts of town this wasn’t much of a problem – Court Street retained its plank walkways through the end of the nineteenth century. Planking was also used as seasonal walkways at the Robinson Female Seminary and Phillips Exeter Academy. If you’ve ever tried to shovel snow from a gravel driveway you’ll understand why it was easier to clear a planked sidewalk.

Sometime in the early nineteenth century the boardwalks in the downtown of Exeter began to disappear. Walkways were set apart from the street by the installation of curbstones. This was enough to stop an errant wagon. Granite hitching posts were added to create a psychological barrier most animals needed to keep them off the sidewalk. The path itself was then filled with ‘cinders,’ the crunchy residue left after burning coal. Once stomped down by enough pedestrians, it made a hard surface. Holes and divots could easily be filled with more cinders.

The next sidewalk idea was concrete. As the current sidewalks are excavated there has been some surprise as layers of old concrete are found. There is some written evidence that downtown businesses were installing concrete sidewalks as early as the 1860s. Concrete is not a new technology, although it has been greatly improved since the Romans used in in 70 AD to build the Colosseum. Nineteenth century concrete was prone to cracking and buckling as our wild temperature variations shift the ground beneath the sidewalks. By the late 1860s, our sidewalks were a mess of old concrete, cracked brick, packed cinder and old planking. In 1870, the local businesses and churches decided to pool their resources and have the whole job done by one firm – W.K. Stratton and Company. Each business paid a fee of 65 cents per yard. The town paid for sidewalks in front of public property – total cost for the project (both public and private) came to $1475.96. The whole thing was viewed favorably. Not only did the walking improve, but it spruced up the town. “We notice with pleasure the laying of a fine curbstone on Front Street from the Methodist Church to Water Street in front of the Town hall. The sidewalk is being widened in places and narrowed in other, thus giving it a desirable uniformity,” crowed the Exeter News-Letter.

These sidewalks lasted nearly twenty years before they inevitably cracked and were patched piecemeal with cement or brick. The next wave of sidewalk improvement happened in the 1920s. By this time, the rise of the automobile made the public far more aware of the need for smooth surfaces. The town approved the installation of granolithic concrete sidewalks – similar to old concrete, but with more stone imbedded for durability. Nancy Merrill tells us, in her History of Exeter, NH 1888-1988, that in 1925, “the Chamber of Commerce convinced the merchants along Water Street to purchase sidewalk flags. Sockets were drilled in the sidewalk along Water Street by the flag company. The new granolithic sidewalk on the northern side of water Street between the Merrill Block and the Janvrin Block was finished in mid- August. The chamber suggested ‘one more band concert’ to celebrate and to have all the new flags flying. It was a beautiful day for the celebration, and the square was thronged with those who enjoyed the ‘spectacle of great beauty;’ the band concert from 8:00pm to 9:00pm was followed by dancing in the square from 9:00pm until 10:00pm.” Exeter is possibly the only town that ever threw a party for new sidewalks.

Of course, those beautiful sidewalks also cracked, but they took longer to crack than earlier ones. Post World War II austerity patched the walks with asphalt – a quick fix, if imperfect. Our new sidewalks won’t last forever, but newer mixes of concrete and the inclusion of expansion joints should prolong their lifespan considerably. In the meantime, the improvements are pure joy to the walker. It’s practically a party just to navigate the downtown without tripping over loose pavement. Perhaps we should throw a second great sidewalk party and call it an Exeter tradition.

Image: The piecemeal condition of Exeter’s sidewalks before the installation of granolithic concrete in 1925 is evident in this photo of Haley’s Meat Market on Water Street.
Email Post