This "Historically Speaking" column was published by the Exeter News-Letter on December 18, 2015. 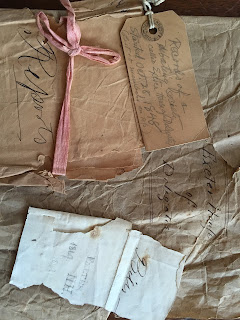 For over a decade a yellowing packet of papers lingered in the uncatalogued collections of the Exeter Historical Society. When it was finally opened in 1986, the archivist was only able to enter “received before 1972”into the record. What was known, however, was that it came from the estate of Dr. William G. Perry (called “young Doctor Perry” to distinguish him from his father of the same name and occupation). Perry was born in Exeter in 1823and worked his entire life in town. After his death in 1910 the family found a host of historical gems in his papers. One of these was the packet labeled, “Records of a debating society called Exeter House of Delegates, started Oct. 28, 1848.”

Every era has its divisive and seemingly intractable issue. Today the issue is probably guns. Our constitution allows us to own guns, but it doesn’t provide us with enough details about how to live with them. The writers of the Constitution couldn’t have anticipated the leaps in technology that would create weapons capable of tearing apart a schoolroom of little children. Nor did they anticipate that people would want to keep this type of weapon at home to protect themselves against the other guy with the same kind of gun. How are we going to get ourselves out of this mess? Both sides of the issue are dug in. We’ve gotten to the point where we can’t even talk about it.

In 1848, the intractable issue was slavery. The Constitution, although never using the word “slavery,” allowed it. For the first few decades of our country’s history slavery was tolerated – providing it remained in the states where it had become the accepted economic system. Compromises had been made regarding governmental representation based on population. There was a balance, of sorts, between those states that were slave and those that were free, and both sides profited from the other. It was an uneasy truce, but one that was largely accepted by both camps. The Mexican-American War, which ended in 1847, threw that balance off. What would happen now that the United States was expanding? Would the new territories be slave or free? What guidance did the Constitution provide? Even in New Hampshire, which one might think would be against slavery’s expansion, the issue was contentious. Tempers flared.

How best to discuss the elephant in the room without flipping tables at the local tavern? In Exeter, where the county court met and the public often attended court proceedings for entertainment, the local lawyers, businessmen and other educated sorts created a debating society to have a forum to discuss – in a civilized way – the problem. The Exeter House of Delegates mimicked, to a certain degree, the United States House of Representatives. Members participated as “representatives” of the states, thus Dr. William Perry served as the delegate from New Jersey, even though in real life he had no connection to that state.

Their dedication to civility and rules is obvious. About half of the business of the Exeter House of Delegates is what we would call housekeeping. Dates and times of meetings were discussed, “Resolved, That hereafter this House shall not be adjourned before hour 10pm except by vote of two thirds of the members present.” “Resolved, That all absentees be allowed to present their excuses for absence immediately after the resolutions have been called by the Speaker and before any special orders of the evening.” “Resolved, That no member shall speak longer than twenty minutes at a time upon any subject before the House.”

You have to admire their insistence on decorum, especially considering the actual U.S. House of Representatives was a violent place. Yale professor Joanne Freeman has commented on the dangerous machismo of the House, “In the rough-and-tumble Congress of the 1830s, 1840s and 1850s, politicians regularly wore weapons on the House and Senate floors, and sometimes used them.” During the discussions leading up to the Compromise of 1850, Senator Henry Foote threatened to shoot Senator Benton. He was stopped (luckily) when other members wrestled him to the floor.

The packet of documents contains only the rules and resolutions of the group. Rarely does it mention whether a particular resolution was passed and it never records the actual debates. They debated resolutions to reduce postage, outlaw usury, allow Athiests to serve as witnesses in court, reduce taxes on manufactured cotton goods. In the spirit of a good role-playing game, they even debated resolutions put forward by imaginary people, in this case women – one that requested outlawing the use of “a certain weed called tobacco” and another that would impose “a duty (tax) upon foreign unmarried females sufficient to prevent competition with the domestic article.” Both were withdrawn before serious debate began. I mean, really.

But by far, the most frequent resolutions dealt with the complicated problems that the nation as a whole could not solve. “Resolved, that we regard the passage of a law by the Congress of the United States abolishing slavery or the slave trade in the District of Columbia as direct attack upon the institutions of the Southern States to be resisted at every hazard.”

“Resolved, that whenever any member shall offer any petition…touching in any manner the subject of slavery in the states where it now exists – or the District of Columbia – or any territory South of the line of the Missouri Compromise – the motion to receive the same shall lie upon the table.” “Resolved, that any petition …shall be introduced touching in any manner the subject of slavery…it shall take precedence of all other business of the House.”

“Resolved, that it is expedient to legislate for the abolition of the slave trade between the several states of the United States.”

“Resolved, that a special committee be appointed to take into consideration the expediency of legislation for the gradual emancipation of the slaves in the several States.”

The Exeter House of Delegates ceased to meet after 1851. The Compromise of 1850, shaky though it was with the North hating the fugitive slave act and the South hating abolition of the slave trade in Washington D.C., bought the nation another decade before war ultimately decided the fate of the slave system. The Delegates, committed as they were to civil debate, were not able to bring forward any of their imagined legislation, however, by participating in the game they found that they could at least talk about the painful divisiveness of the day.

Photo: Materials in the handwriting of Dr. William G. Perry – member of the Exeter House of Delegates
Email Post