This "Historically Speaking" column was published by the Exeter News-Letter on December 4, 2015.

The youngest man ever to own the Exeter News-Letter was a fascinating 20 year old Phillips Exeter Academy drop out named Charles Marseilles. Lucky enough to have been born into a family of means, he had ambitions to become an editorial kingmaker – devoted to Republican politics. He didn’t always succeed, although to read his own press one might believe he had. At his death in 1920, his obituary writer in Exeter found it hard to sum up the life of the man, commenting only, “despite his interest in politics, Mr. Marseilles never held public office. He was a man of much native ability and of marked individuality.” 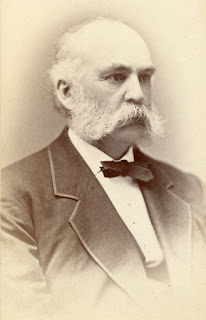 Marseilles was born in Philadelphia in 1846, the son of a comfortable wholesale merchant. In 1862, at the age of 16, he entered Phillips Exeter Academy. He remained there for less than a year. The reasons for his leaving are uncertain, although these were uncertain times. The Civil War was raging and within a year Marseilles entered Norwich University – a military academy – in Vermont. Even though his time at Phillips Exeter was short, it held enough social clout for him to remind anyone who would listen that he had attended the school. In a Granite Monthly profile of Marseilles written in 1897, author Henry Robinson wrote, “of the boys whom Mr. Marseilles personally remembers at this superior institution are Robert Todd Lincoln, son of President Lincoln; Ulysses S. Grant, Jr., son of General Grant; Levi Woodbury Blair, son of Montgomery Blair; August Belmont Jr., son of August Belmont and many others equally distinguished by their parentage or their own advancement in later years.” But he couldn’t have ‘personally remembered’ them. None of these boys attended Phillips Exeter at the same time as Marseilles.

He remained at Norwich until the war ended in the spring of 1865. Realizing he didn’t need to prepare himself as a military officer, he left the school and went to Boston to work at the publishing firm of Ticknor and Fields. This venerable firm published many of the respected authors of the day, including the likes of Hawthorne, Dickens, Tennyson, Thoreau, Emerson and Whittier. Marseilles absorbed all the publishing knowledge he could and seemed to believe that his short tenure with the company yielded him friendly relationships with the authors. He worked there for less than a year. John Greenleaf Whittier, who later autographed a volume for him, seemed to need reminding of who Marseilles was. When inscribing a book to him in 1891, he wrote, “To Charles Marseilles, who was an attaché of the store of Ticknor and Fields when it was first issued I am sure this little volume will not be unacceptable, with the good will and wishes of its author – John G. Whittier.” It was like that with Marseilles. The publishing house instilled in him an obsession with books and autograph collecting. His extensive personal library began to grow.

He must have heard, while still working at Ticknor and Fields that the Exeter News-Letter was up for sale. He returned to Exeter and purchased the newspaper hiring Andrew Hoyt to serve as his editor and printer. From the very start the two men decided to change the sleepy agricultural paper into a political journal. Jumping into the politics of the post-war period, “politically, we believe the News-Letter to be on the right track,” they wrote in their first edition on September 17th, 1866, “and amid the present chaotic state of politics, we unhesitatingly unfurl the UNION REPUBLICAN banner.” Together Marseilles and Hoyt expanded the paper and introduced decidedly partisan editorial content. Hoyt left the paper in 1871. Marseilles, who had set down roots in Exeter by marrying Annie Leavitt in 1869, inherited a great deal of money from his father’s estate in 1878. He purchased two more newspapers in Kingston, New York, the Daily Freeman and the Journal. This necessitated moving to New York, although he still maintained control of the Exeter News-Letter through the capable editorship of William Morrill. In Kingston, he took credit for the success of Republican candidates in the elections of the 1880s. Granite Monthly would later crow, “at the first election following the transfer of the journals, a Republican county treasurer was elected, for the first time in many years; two years later, led by Marseilles, in the Freeman and the Journal, the Republicans captured the county, which was held by them until the Democratic landslide of 1892.” Although he liked to take credit, this was most likely a reflection of the political winds in that decade.

He didn’t stay in Kingston very long. Overwork began to wear on him, even though he loved the excitement of politics. As something of a gadfly, his journalistic credentials allowed him contact with politicians at all levels. He supported Republican candidates and eagerly name-dropped any he shook hands with. To meet Charles Marseilles was to become his dearest friend – at least to his mind. He wrote to his old ‘school friend’ Robert Todd Lincoln, requesting an autographed photo. The publicity-shy Lincoln sent him the photo – but told him it was NOT for publication.

In 1882, Marseilles became ill. “He fell victim to nervous prostration from overwork and malaria,” explained the Granite Monthly before mentioning that he consulted with the esteemed Dr. John H. Douglas of Brooklyn, NY, physician to General Ulysses Grant. Most likely, he simply wrote him a letter. After taking some time in Vermont to gain strength, he returned to Exeter, sold his newspapers and settled into a life of collecting autographed books and political punditry. Although he was called, “the political prognosticator and Presidential prophet of Exeter, NH” by the Rhode Island Gazette and Chronicle, he rarely picked a winning candidate. In 1899, he enthusiastically encouraged Admiral George Dewey, the hero of the Battle of Manila, to seek the Republican nomination for president. The problem was Dewey, who had sent Marseilles an autographed photo, turned out to be a terrible candidate. He admitted he’d never voted in a presidential election and once it was obvious that the Republicans weren’t interested in him, he simply switched parties and tried to capture the Democratic nomination.

By the turn of the century, Marseilles seemed to be out of his own influence. His wife died in 1904, leaving Charles alone in his house full of books. The entire collection was sold at auction in 1907. Marseilles himself never fully recovered from his earlier illness – which proved to be not malaria but syphilis. He entered the state hospital in Concord in 1908, his health slowly deteriorating for the 12 remaining years of his life. Before his illness took hold of him, he received accolades from many sides. Henry Robinson, the Granite Monthly author and perpetual fan-boy wrote of him, “How many things Charles Marseilles knows, which to tell would make him a brilliant newsman!”

Photo: Charles Marseilles became the sole proprietor of the Exeter News-Letter in 1866 at the tender age of 20.
Email Post