This "Historically Speaking" column was published in the Exeter News-Letter on Friday, October 23, 2015.

“While gas has illuminated almost every village in the country, Exeter has sat in darkness, or in the shadow of whale oil, and those who have been far enough from home to see its light, have bewailed the deprivation of not having it here,” noted the Exeter News-Letter in October of 1861. The effort to sign up customers for the new gas service was difficult, falling as it did right at the onset of the Civil War. Yet gas had already arrived in most towns and by all measures it was a far superior product than those of the past. 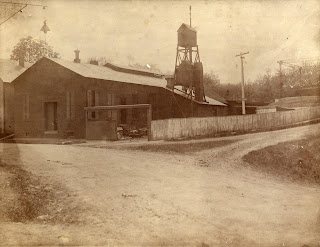 The Exeter Gas Light Company incorporated on December 23, 1861, having completed construction of its gas plant on Green Street only a few weeks earlier. “Ours is to be coal gas, such as is produced from what is generally known as hard coal. There is no doubt but this must be classed with the luxuries of life. It may require considerable exertion to get the best class of customers, during war times, when taxes must be high. But gas light is far in advance of other lights generally in use.” Producing the product called ‘town gas’ from coal was a difficult and grimy process. Tons of coal was needed to feed the furnace, causing temperatures inside the plant to often reach 130 degrees. The by-product, coal tar, was leached into the ground, creating toxic waste problems that were left to the future.

Gas also had a reputation for being explosive. Overcoming this anxiety was problematic for the gas company. Every new technology has to convince consumers that it is somehow better than what was offered in the past. In Exeter, as in many towns, the way to prove that gas lighting was necessary was to get it installed. The gas company offered to illuminate the dark streets of Exeter as well as the Exeter Town Hall. John Gilman was spending the winter in Philadelphia when Exeter first lit up with gas light. His sister wrote to him about the Christmas fair held at Town Hall, “the hall was lighted for the first time with gas, which lent an attraction. This is a new thing for old Exeter, say you, and a great thing if it brings not too heavy a tax bill for us in the end. It is being introduced into various private dwellings, into most of the churches, and a few of the principal streets are being illuminated.” The brilliancy of the lighting quickly overcame most qualms held by the public. Gas had the added advantage of being versatile enough to be adapted for cooking and heating. Once the gas lines were snaked through town, it seemed like gas was the fuel of the future.

Until electricity arrived to run the streetcars, that is. Electricity seemed to have no downsides – it was clean, had no open flame and seemed safer. In 1898, the town began to debate which type of lighting was safer and more efficient. Although there were no explosive accidents to homeowners, an accident at the gas plant in late 1897 set people on edge. “An explosion of gas Tuesday morning caused less than $200 damages to the plant of the Exeter Gas Light Company,” reported the News-Letter. Albert Dewhirst, an employee, arrived early in the morning to take a meter reading. His lantern caught a small gas leak and the ensuing explosion threw him back into the street, shattering windows, lifting the roof and crumbling portions of the interior of the building. Although the damage was small, and Dewhirst was rumpled but unhurt, it did little to encourage the further use of gas. Electricity won out as the town lighting source. Gas continued to be used by many people only as fuel for stoves and furnaces. 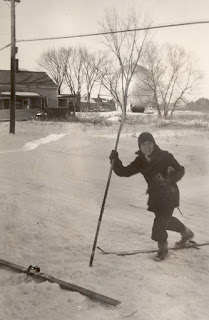 The gas company upgraded to a cleaner form of gas production in 1927 and the old plant was converted to the new water process. At that time, an immense steel ball was erected across Water Street to contain the gas. A few years later, in 1931, the old coal gas machinery was unused and, “this came to the notice of Mr. Taylor, investigator and buyer for Henry Ford, who decided that the old gas plant would make a much–desired addition to the Ford enterprise at Dearborn, Michigan. He purchased the discarded apparatus, had it carefully taken down, marked, and shipped on freight cars to Dearborn, where it is now being re-erected for the manufacture of coal gas.” There it joined a few other Exeter edifices, the John Giddings house and the Lamson Pottery works, as part of the Henry Ford Institute.

With the advent of natural gas use in the 1950s, the gas plant was used less and less – primarily for peak shaving. Gas was shipped into town, the old plant on Green Street ceased to be used in the early 1970s and was taken down in 1975. The gas ball, once a landmark in town on the river, was removed in 1979 to make way for the construction of the Squamscott View Apartments, which opened in 1981. Unitil, the current owner of the old gas works site, has worked to landscape the site and is still working to abate the toxic residue of the manufactured gas era.

Photos: Exeter Gas Light Company gasworks on Green Street. This facility was used to produce coal gas for town use from 1861 until 1927 when the plant converted to a new process.   The gas storage ball, an immense reinforced steel structure, stood on the shore of the Squamscott River just opposite the gas works plant from 1927 to 1979. Although well known to Exeter residents, finding a photo proved to be exceedingly difficult for the Exeter Historical Society.
Email Post