“Send Everything You’ve Got:” The Robinson Female Seminary Fire

This "Historically Speaking" column was published in the Exeter News-Letter on Friday, October 9, 2015.

“Smelled smoke strongly ½ hour before the alarm blew about 9 o’clock,” Betty Kreger wrote in her diary the night of October 5, 1961. Kreger, a widowed piano teacher, began to get whiffs of the disaster from her house on Ash Street. “Got up and rushed outside – staid outside till 10 or so.” The flames were visible from her home, but Betty, like countless other Exeter residents, raced to the fire scene and stood transfixed behind the police line to watch the towering Robinson Female Seminary burn to the ground. 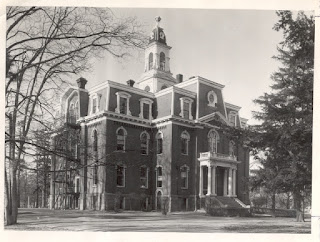 For almost one hundred years, Exeter had been unique in its school structure. The town was happily surprised in 1864 to receive a bequest from the will of William Robinson to fund a school for girls. Robinson, who was born in Exeter in 1793, attended Phillips Exeter Academy and went on make his fortune in Georgia. His sisters, he felt, were never given the educational opportunities he had. The town built the school and the Robinson fund sustained the corps of teachers. Generations of young women in Exeter benefitted from Robinson’s gift. The school building was erected and dedicated in 1869 – a towering Second Empire style edifice with a globe proudly standing on the very top of its tower.

As early as 1928, there was talk of reunifying the town schools, but the movement never gained traction. After World War II, increasing student enrollment and a crumbling building made the move to coeducation more of a necessity. The final class graduated from the Robinson Female Seminary in 1955. Olive Tardiff discussed the closing of the Seminary in On Ever, Robinson, a small publication created by the RFS alumnae in 1988. “The High School was to be enlarged to accommodate grades seven through twelve for boys and girls, and the Talbot gymnasium to be added to the building. A new elementary school was to be built on Seminary property, with rooms in the Seminary building to be used for the superintendent’s office, a cafeteria for elementary pupils, and art and music classes. The names of Robinson and Tuck were to be abolished, and the combined school named Exeter High School.”

The school board struggled with the problem of what to do with the old building. Over time, the building began to look shoddy. During the summer of 1961 most of the contents were moved out and the Boy Scouts were notified that they could no longer use the facility for meetings. Plans were made to board up the building to prevent vandalism. “By closing it,” the Exeter News-Letter noted, “school officials expect to save $3,500 in fuel, light and maintenance costs annually.” But what to do with it? An article published in July posed the question, “Is Exeter building doomed to ‘White Elephant’ Status?” The functional restrooms in the basement led to the suggestion that perhaps the long wished-for town pool could be built on the property and the basement converted into locker rooms. Or, on a far more practical level given the Cold War times of the 1960s, perhaps the building could be torn down and the basement renovated to be a fallout shelter for St. Michael’s parochial school and Lincoln Street School. While dithering over a decision, the lower floors were boarded up. Vandals quickly began focusing on the windows in the upper floors. The last photo of the old school was published in the News-Letter on September 28th – just one week before the fire. In it, the sad school, its tower removed and lower floors boarded, is having the windows on the mansard roof boarded. Al Cote, who is seen hammering the plywood didn’t even get his bill submitted to the school board before the fire destroyed his work. When he went before the board with his bill the day after the fire, he was asked whether he could prove that the work had been completed. Ben Swiezynski’s photo served as his proof. 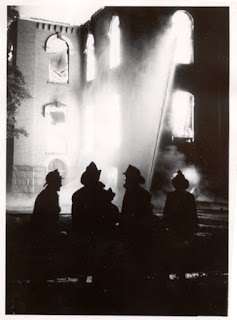 Several people reported smelling smoke as early as 6pm on the night of October 5th. The police investigated, but could find no fire. “At 8, fire Chief Toland drove through the property,” reported the News-Letter, but, being to windward of the probably smoke, failed to detect its presence.” It was at 9 o’clock – half an hour after Betty Kreger noticed a smoky smell – that Officer Richard Cole spotted a small blaze. The members of Engine 1 Company were holding their monthly meeting at the fire house and had just broken up to go home when the call came in. As soon as they arrived they knew this was no ordinary fire. “Fire out of control upon arrival,” reports the call book. “Removing a board from the basement window revealed a fire of severe dimensions already underway and the call went to the fire station ‘Send everything you’ve got’” the News-Letter quoted. “Over 8000 feet of 2 ½” hose used. Building a total loss. Hampton and Stratham fire departments called in to help,” the call book continues. The fire raged for hours. The floors, oiled annually, were highly combustible and sent flames 100 feet into the air. It was estimated that nearly 2000 onlookers- many of them Robinson Seminary grads – arrived to watch the beloved school burn. By 1:45 am, the fire was under control. The ruins would smolder and occasionally flame for the next week. 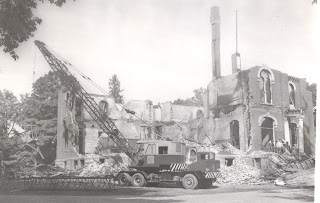 As sorry as most of the Seminary girls were, there was also some feeling of release. The old school was not ageing well and many felt it had been badly treated by the town. Elvira Benfield Collishaw, class of 1918, summed it up best in her 1980 paper, “The Building of the Seminary:” “It no longer stood alone, deserted, desecrated, defiled. It belonged to memory.”
Email Post

Steve Finnell said…
This comment has been removed by a blog administrator.
October 9, 2015 at 1:29 PM