We think we live our lives alone.

On April 5, 1945, a soldier was killed in battle in the Ruhr Valley in Germany. An American soldier. Many others were killed that day, from many countries.

This American soldier 2nd Lieutenant Albert Sumner Wetherell III – called Sumner by everyone back home - was from Exeter, New Hampshire. He was one of 19 men from Exeter to die during World War II. We know nothing of the circumstances of his death – whether it was a bullet or an explosion or whether he was crushed under a tank. The War Department only reveals “killed in action” perhaps to temper the blow.

His father, also named Albert Sumner Wetherell, living on Front Street, was not a newcomer to tragedy. He’d lost his wife to childbirth in 1925, and a year later the child, just a year old, died of scarlet fever. All this had happened when young Sumner was just a boy. Sumner and his sisters, Jane and Elizabeth had felt the losses deeply. Maybe this was why he didn’t rush to enlist as soon Pearl Harbor was attacked in December of 1941.

He didn’t come from a military family. His grandfather, the first Albert Sumner Wetherell, had been too young to serve during the Civil War and his father too old for World War I. Sumner’s grandfather became a druggist, back in the days when compounding medicines required no formal schooling. Born in Maine, he’d studied the trade at a drugstore in Gloucester, Massachusetts. Within three years, he moved to Exeter and set up shop on Water Street. In 1896 he completely renovated his stogy-looking old drug store proudly placing the tools of his trade – a mortar and pestle – on the rooftop. It’s still there, although a toy store now lives in the old building. The mortar and pestle looks small from the ground, but it’s actually four feet tall – the height of a third grader. Next time you look up at it, think about that – the tools of one’s livelihood the size of a third grader. The size of a Brownie or Cub Scout.

He may have wanted his son, Albert Sumner Wetherell Jr. to become a pharmacist – he certainly prepared him well. Albert Junior went to Governor Dummer Academy and Phillips Exeter. He would have been well prepped for the new scientific work of the pharmacist, based less on folk remedy and trial and error and more on chemistry. But it was not to be, the most educated of the Albert Sumner Wetherells was lured away by the sputtering, noisy, exciting promise of the new century – the automobile. After his father’s death, Albert Junior opened a garage and car dealership on Franklin Street – if not the first than among the first such establishments in town. His son, Sumner the reluctant soldier, would also be pulled away from the books and into the world of machines.

The wrench and the torque rod fit into Sumner’s hands like they’d grown there. He didn’t need a high school diploma to fix cars. Each completed job brought a crescendo of sound as a machine, well-greased, leaped into action transporting its owners on journeys both short and long. It was very satisfying work.

He was also elected as assistant scoutmaster to Boy Scout Troop 193 and within a year was acting scoutmaster – leading boys into the outdoors teaching them the skills required for camping and survival. His troop was given a blue ribbon for camping proficiency at the Stratham Camporee in the fall of 1940 and assisted in the successful search for a missing scout that weekend.

By the middle of 1942 it became harder to avoid the war. Men from the town were leaving – either drafted or enlisted. In July, Sumner Wetherell joined them. He was 25 – a few years older than most recruits, but with only 3 years of high school and no diploma, he enlisted as a private, listing his civilian occupation as “semi-skilled driver, bus, taxi, truck, tractor.” This was probably a check off box on the form. 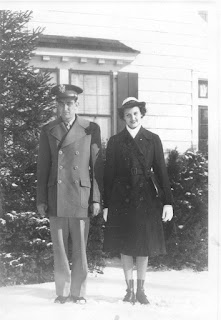 Basic training was a Camp Wheeler in Georgia. In July – a tough climate for a northern boy. It was at Camp Wheeler that his leadership skills, honed with the fire service and scouting, were recognized. As soon as basic was completed, he was shipped off to Camp Hood in Texas for Officers Candidate School, graduating as a 2nd lieutenant.

That winter, he was given brief leave and returned to Exeter for what would be the last time. A photo taken during this visit is in the collections of the Exeter Historical Society. He stands next to his smiling sister Elizabeth, who is herself in uniform of the WAVES. In spite of the smile, it is a stiff photo – a young man about to face battle – uncertain of what the future holds.

Not unlike the statue behind me. 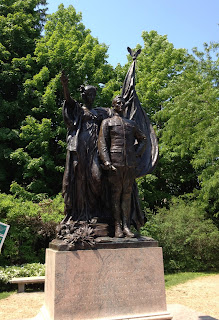 Our statue was sculpted in 1922 after the first ‘war to end all wars’ by Daniel Chester French. Like Sumner Wetherell, French was an Exeter native. He dedicated two of his statues in 1922 – this one and the seated Abraham Lincoln in Washington, D.C. in the Lincoln Memorial.

French had been a boy during the Civil War. He had seen the toll war takes on families and towns and he made a very conscious decision to sculpt this soldier without his uniform hat. He didn’t want to romanticize war by making the figure too eager. Instead there is a feeling of hesitancy – not fear exactly – but grave uncertainty. You see it here, you also see it in the face of Sumner Wetherell in the photo taken just before he shipped out.

Albert Wetherell, his father the auto dealer, waited. 1945 came and the war was almost over. April – almost over and the Allies were making the final push into Nazi Germany. Every day brought more news of territory gained. Hearts were hopeful. They would be coming home soon. The waiting would be over.

On a Saturday night, April 21st, Albert received news that his son, Sumner, was missing in action – purgatory for a parent.

He spent two more days hoping against hope that his son would be found – that some miracle had happened and maybe the platoon he was leading would come upon him, injured but alive in the chaos.

But they didn’t. On Monday, word arrived from the War Department: 2nd Lt. Albert Sumner Wetherell III, killed in action, age 28. He would never marry. Never father a son who might be the next Albert Sumner Wetherell. Never meet the nieces and nephews who would come along. His name was inscribed on the family gravestone in the Exeter Cemetery (you will pass right by it if you follow the parade to the end – look on the right towards the back of the cemetery).

His name is below that of his mother and infant brother. The family’s grief was shared by the town, as shared the grief of the other 18 families who lost their sons. A shared loss. Grief not weathered alone.

Far, far away in the American War Cemetery in Margraten, Netherlands, Sumner Wetherell was laid to rest, along with over 10,000 other Americans who died in the war. There is a gloominess that can come over us when we think about our townsman buried in a distant land. Who remembers Albert Sumner Wetherell? We lost his mechanical skills, his leadership of men and boys, his understanding of the burden of his generation. We are the ‘Mother Town’ in the statue, asking so much and losing much more. We can pledge ourselves every year to not forget the men and women who die in war, but it’s hard when we have to leave them so far away.

There is another mother statue similar to ours that stands watch over the fallen soldiers at the Margraten Cemetery. Separated by thousands of miles their sisterhood binds them together. And Albert Sumner Wetherell is not forgotten. In March of this year, the historical society received an email from John Essers of Margarten. In English, which was hard for him, he wrote,“Many years ago I have adopted the grave of a soldier named Albert Sumner Wetherell. Six times in a year I bring flowers to his grave and so do I remember him and for what he has done for us in World War II. Every time, when I stand on his grave, I think also what for man he has been and if he has still family in the U.S.A.”

“What for man he has been”

He was a leader, Mr. Essers. He was our leader. He does still have family in the U.S.A. – family here today. 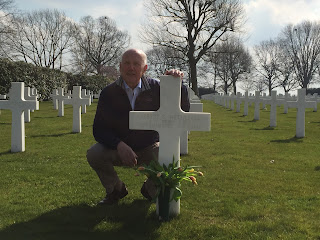 As part of a larger project called “The Faces of Margraten” Mr. Essers requested information and a photo of the man who’s grave he tends with such loving care. We sent him the photo of Sumner and his sister – that last photo taken in his hometown. In the beginning of May it was displayed along with thousands of others in the cemetery. “In this way,” the organization explains, “Dutch citizens will give a face to their U.S. liberators as a unique tribute to their sacrifices.”

We think we live our lives alone.

We live in shared space and we share our history with other places and other people. Let’s recommit ourselves to grasp for peace, to no longer have a reason to build memorials to young lives lost, and whether we’re old enough to remember war, or young enough to be the same size as a rooftop mortar and pestle – we hold the memories of those already lost dear. 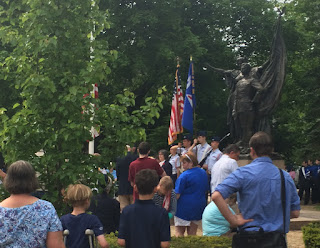