This "Historically Speaking" column was published in the Exeter News-Letter on Friday, June 19, 2015. 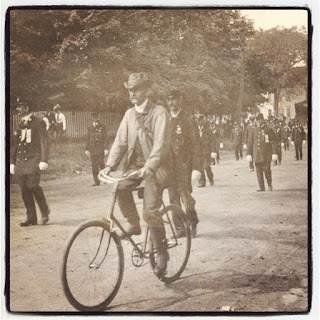 The end of June has, in recent years, brought the Exeter Classic criterium to town. We begin to feel the presence of competitive bicyclists in the weeks just preceding the race, with teams frequently visiting the town to acquaint themselves with the course. On race day, bales of hay appear around the base of utility poles and road signs to protect the riders in case they take a tumble (or maybe they’re protecting the poles – some of those bicyclists move pretty fast). The downtown streets are closed in the late afternoon and for several hours we’re caught up in the enthusiasm of hyper-fit speeding cyclists streaking through our usually tranquil town.

June is such a pleasant time of year – especially for watching a bike race – that it might be surprising to learn that the first bike race in town was held on February 20th, 1869. Remember February? It was that snowstorm that lingered for 28 days. Back in 1869, the snow was not a factor because the race was held inside the Exeter Town Hall and the bicycles were called ‘velocipedes.’

These early contraptions were not for the faint-of-heart. The pedals were on the front wheel, the braking system was adapted from a wagon brake and the wheels were wooden with iron rims. Incompatible with a rider wearing skirts, the velocipede was a man’s toy. It’s interesting that the first mention of a velocipede in the Exeter News-Letter was just a month before the first race. In January, the News-Letter noted, “velocipedes are disturbing the equilibrium of ‘walkists’ and Manchester is ‘going in’ for the new method of locomotion. John Smith of this town should build one. He can do it if he tries.” The following week it was announced that velocipedes were being made at the Exeter Machine Works.

Early velocipedes were banged together by blacksmiths and carriage makers. Exeter had both of these specialties in town. John Smith, named in the earlier notice, was listed as a ‘machinist’ in the directory and would have been readily able to build a velocipede. Another early adopter was J. Albert Clark who, with William Burlingame, founded the Exeter Machine Works. Clark lived, at the time, next door to the Shute family and many years later Henry Shute – who’d been a Dennis the Menace type neighbor – wrote about ‘Old J.Albert’s’ attempts to master the velocipede. “Plupy and Old J. Albert” was written as though Shute was perpetually eight years old – spelling errors included. “so every day after old J. Albert had did his wirk at the office he has went down to take a lesson and I have went down to wach him and Charly Laribee and Wiliam Burlingaim and Charly Gerrish and doctor Prey and others. It was grate fun. Old J. Albert was the wirst. I never saw a feller fall so meny times and so meny different ways or get so meny splinters into him as old J. Albert did, or tare his britches so bad.”

Mastering the machine took time and a great deal of help. The popular book “The Velocipede: its History and Practical Hints How to Use It” published in 1869 and authored by “an Experienced Velocipedist,” explained, “The assistant pushes the velocipede with the rider upon it down the incline, retaining the velocipede in his hand and steadies the machine so as to preserve the equilibrium.” This matches Shute’s memory that early velocipedes required the help of ‘pushers’ to get them going. “sometimes the feller whitch was learning old J. Albert to ride gave him a auful hard push and sometimes he got sum other feller to help him and then when old J. Albert went down he sometimes tirned 2 summersets hanging onto the velossipede and never let go.”

Watching the daring men attempting to master the device became something of a spectator sport. The News-Letter announced, “Go and see the velocipedes at the Town hall. There will be some ‘lofty tumbling’ if an opportunity is offered for all the carriage makers and stable keepers to take a ride” on February 12. The following week, John Smith announced a riding school to be followed by a race with a silver cup for the prize. “The consequence of this school has been the giving of numerous orders to Mr. Wm Burlingame for these wheelbarrow-like, donkeyish, hermaphroditical, centaurical carriages.”

The grand race, held on a Saturday night in the Town Hall, was a, “strong quarter of a mile, to accomplish which the circuit of the hall was made nine times.” The News-Letter reported that the competitors consisted, “mainly of Academy Students, the dental profession having two representatives.” The dentists were Drs. Gerrish and Pray, both of Exeter. Dr. Gerrish, who ultimately placed third, remained a devoted cyclist for the rest of his life. J. Albert Clark didn’t place at all. Perhaps he was, as Shute said, “the wirst.”

Although the velocipede was a new and exciting vehicle, it had its share of critics. William Cutts, sounding very much like a modern hipster, derided the new contraption telling the News-Letter, “he rode a velocipede in this town forty-six years ago. It was of the kind that was propelled by pushing with the feet on the ground. He rode it down Towle’s Hill many times, but several ugly tumbles taught him to confine his excursions to level ground.”

Photo: Dentist Charles Gerrish, here seen leading the Fourth of July parade in Exeter in the 1890s was an early adopter of that new-fangled invention – the velocipede. He is, in this photo, riding a bicycle.
Email Post