This "Historically Speaking" column was published in the Exeter News-Letter on Friday, February 27, 2015, and Friday, January 31, 2020.

The shortest month, February, seems like the longest month of winter. Granted the last month of any season always seems to have outlived its welcome. Yet, in New England we persist in living here even though every winter we have to go into survivalist mode. What’s with us? Have we always been this way? 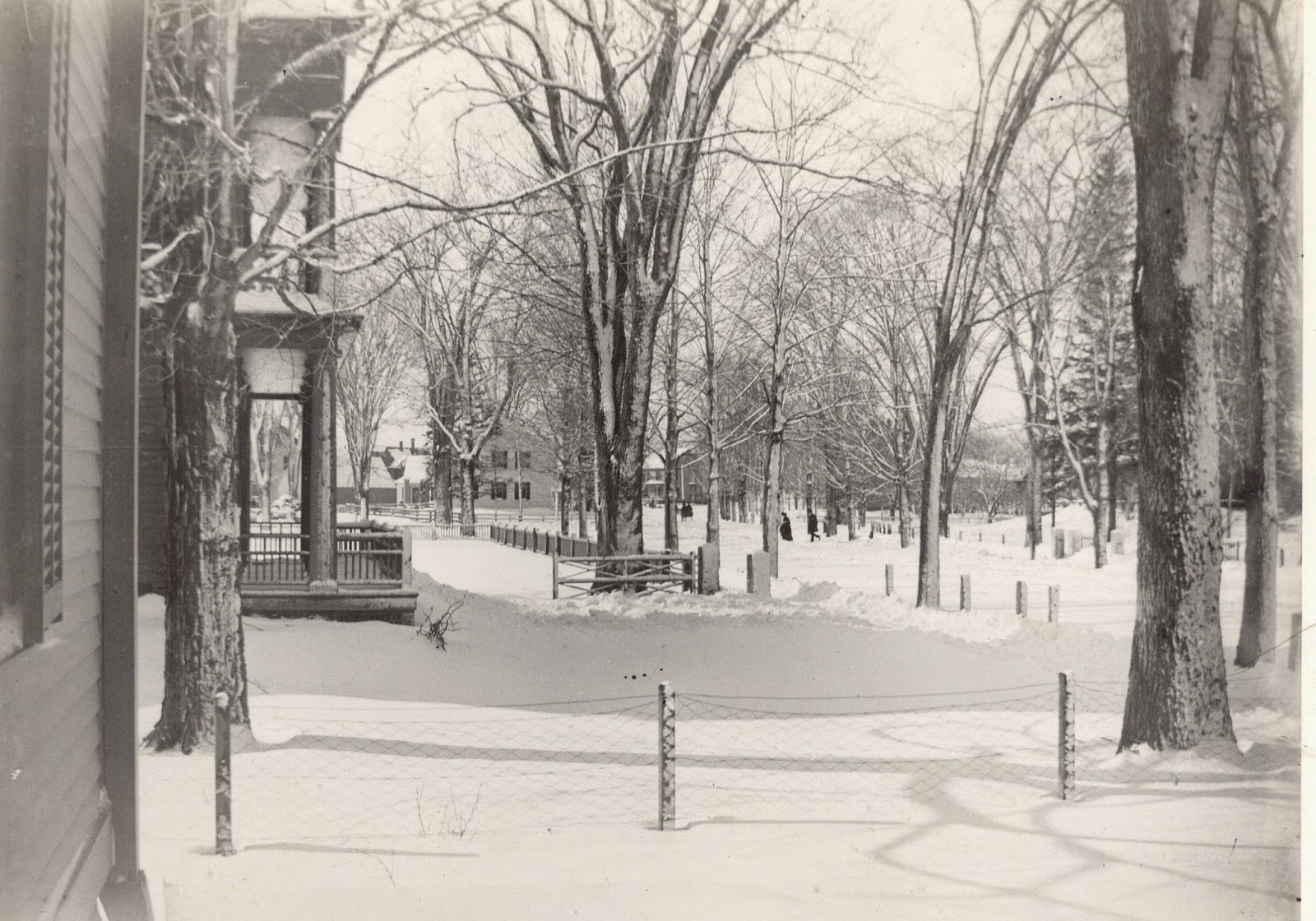 Well, yes, the New England character seems to relish harsh weather – even as we gripe about it. This was as true in the 1830s as it is today. Paging through the early years of the Exeter News-Letter provides us with some clues about coping with winter. It’s rarely a good thing to fall into nostalgic magical thinking – “when I was a kid things were blah, blah, blah” – but in the case of winter it’s hard to deny that people had to be tougher about cold than we are today. We have moisture-wicking polypropylene underwear and lightweight fleece to layer under our down-filled jackets. And even if we can’t get teenagers to wear such things, at least we don’t commonly encounter newspaper stories like the January 29th, 1833 entry in the News-Letter: “Mr. Elijah Chase of Hampton Falls was found frozen to death on the road from Portsmouth to little Harbor on the 21st.”

Travelling from Hampton Falls to Portsmouth would have been an all-day affair and it would have been undertaken without the benefit of heated seats in a warm car. No mention is made of Mr. Chase’s horse, so likely he was walking. The physical exertion of walking would have kept him warmer than riding in an open sleigh, but it takes longer to walk and eventually the cold caught up with him.

Sleigh riding was both practical and recreational. Roads were rolled smooth rather than plowed and sleighs, encountering less friction than wheels, were faster than carriages. Horse’s hoof beats were muffled in the snow and, much like a Prius of today, people complained that they couldn’t hear them coming. The solution was to require sleigh bells. In February of 1833, the Exeter News-Letter passed along this notice from the New Hampshire Telegraph, “in these times of good sleighing, the law providing that horses travelling in sleights shall wear bells out to be rigorously followed up. The accidents happening from this neglect are numerous. Besides, what is the fun of riding without bells?”

But how could one keep warm in an open sleigh slicing through temperatures in single digits? In the 1830s the warmest material in the United States was the buffalo robe. James Page, a Water Street merchant, advertised annually from November through March, “a large and prime lot of Buffalo Robes, which will sell by the bale or single, as cheap as can be purchased elsewhere.” He also sold, “winter CAPS, consisting of fur-seal, nutra, hair-seal and cloth.”

Gentlemen were advised to grow whiskers. A December 1832 notice, passed on from the New York Citizen, encouraged, “everything in its proper season – cowslips in the spring, cucumbers in summer, cantelopes in autumn, and whiskers in winter.” Women, of course, didn’t have this natural advantage, but they did wear multiple layers of stockings and petticoats. In the collections of the Exeter Historical Society is a knitted all-wool petticoat (seven stitches per inch, for all you knitters out there), which would have kept the wearer as warm as wearing an afghan under her skirts. Not only was this a practical garment, but creating it would have certainly passed the time on long winter days. Knitwear has always straddled necessity and artistic expression. In November of 1832, the News-Letter remarked of a Portsmouth man wearing house cat yarn gloves, “the fine hair was combed from her back at the season when she would naturally shed her coat, and the product of two years has enabled his wife to prepare this new and elegant species of domestic manufacture.” How many months of housebound cold weather is required before you begin to look at your cat and think, “you know, I could make something out of all that fur…?”

Whiskers and blanket-like petticoats aside, we still have to admit that we have it easy. Our complaints about getting out of a warm bed would have fallen on deaf ears to people who were accustomed to having to break the ice in the wash basin every morning. At best our homes are ‘chilly’ in the morning and not actually cold. The scourge of children and the elderly were the dreaded ‘chilblains’ – an ailment that most of us have never heard of. The emergency department nurse practitioner consulted for this article has never seen a case in his 26 year career. Chilblains are an inflammatory reaction to rewarming the hands and feet too quickly after prolonged exposure to cold. It would cause swelling, intense itching with blistering and open sores. The News-Letter advised, in 1832, “it is said raw cotton bound on the feet is an infallible remedy.” Various concoctions and ointments were advertised. Doctor Tilton suggested “Wheaton’s Itch Ointment – cures in less than an hours application.” Likely the ointment did little good. Dr. William Perry’s book of prescriptions and compounded medications includes “Magic Healing Powder,” which consisted of chalk, burnt alum, camphor and calamine. It’s listed in the book right under “Dog Pills” and “Sea Foam Shampoo.” These are all good reasons to avoid time travel.

The end of February is always eagerly anticipated, but fair warning: March is a habitual tease. Even in 1833, John Sleeper, the editor of the Exeter News-Letter lost patience with lingering winter. On March 12th he noted, “the weather, with the exception of a few days lately, has been astonishingly cold. The thermometer running from a few degrees below, to a few degrees above zero. Our ideas are absolutely frozen, and we fear will not be properly thawed until dog-days: which must account, satisfactorily we hope, for the frigidity of the matter contained in our columns lately. It was but a few days since, having succeeded with great labor in thawing an idea, we attempted to transfer it to paper, but meeting with ill success, we examined our slylum, and found we were writing with an icicle.”

Photo: Front Street buried in the depths of winter, probably taken in the 1890s.
Email Post

D. Eldridge said…
Great article! I can't even imagine not living with central heat. Thank goodness I don't have to!
March 1, 2015 at 1:48 PM