This "Historically Speaking" column was published in the Exeter News-Letter on Friday, February 13, 2015. 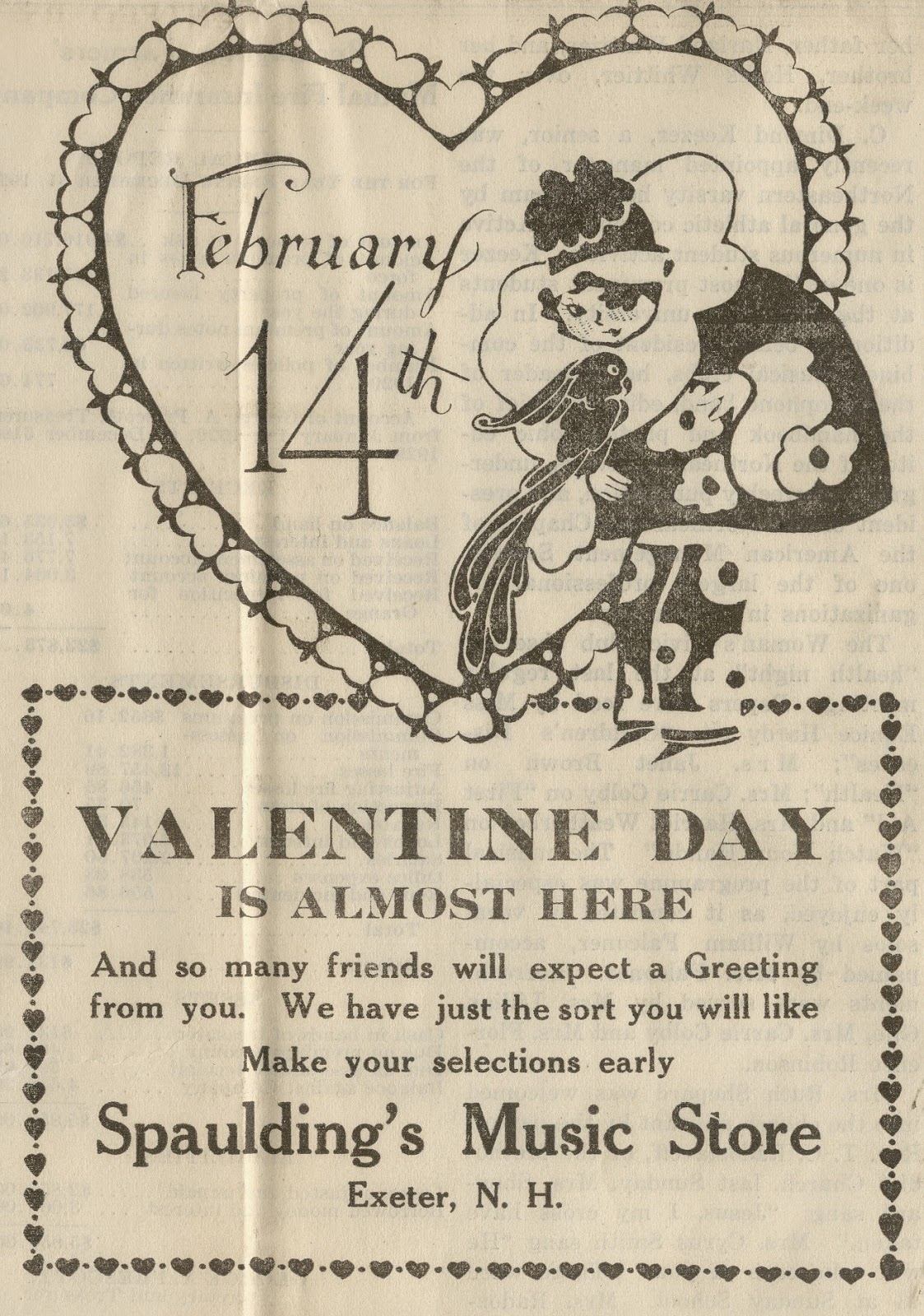 The holiday is old, that much we know. Depending on the source, it’s a pagan Roman holiday or a Catholic saint’s day or a combination of the two. The tradition that the date of Valentine’s Day – February 14th – was the day that birds begin mating in the spring indicates that it was definitely not native to New England. There’s no sign of mating birds in mid-February around here. Our birds are mostly hunkered down on the power lines questioning why they didn’t fly south months ago. Considering Exeter, and most of the Puritan northeast, didn’t even celebrate Christmas, one would think that Valentine’s Day would not be celebrated here. Christmas finally caught on in the late 1850s, so it was actually quite a surprise to find that Valentine cards are advertised in the Exeter News-Letter in 1848. “Stand Back! Stand Back!” the advertisement shouts, “Don’t crowd – you will be favored with an opportunity to select in season for the day, from the finest, richest, and best selected collection of Valentines ever offered in this vicinity. Wit and humor, fun and frolic, ridicule and sarcasm, as well as the most chaste and delicate compliments in the form of Valentines at Lovering’s Bookstore.”

These were most likely cards designed by Esther Howland of Worcester, Massachusetts. Howland was a recent graduate of Mount Holyoke College and had received a commercially produced Valentine from England, where sending the cards had long been a tradition. Looking for a venture for her father’s stationary shop, she designed and marketed Valentines and is considered the founder of the practice in the United States.

In 1889, the News-Letter noted, “the number of Valentines received and sent from the local post-office yesterday showed a decided increase over last year. Batchelder reports a very satisfactory sale.” The postcard craze of the 1890s gave Valentine’s Day a boost throughout the country. Costing only a penny to buy and a penny to mail, people happily sent cards not only to sweethearts, but to children and family members as well. In 1909, young Betty Tufts recorded, “got 28 Valentines in all, 9 at school.” Valentine’s Day parties became quite popular around this time, and since then the ritual of opening and sorting the little cards has become part of the school year tradition. In the early 1970s, the classroom party included cookies, cupcakes and Hawaiian Punch. Probably kids today have healthier snacks, but sources from both Lincoln and Main Street schools in Exeter indicate that they still exchange Valentine cards in school.

Betty also received a 2 pound box of candy in 1909. Chocolate and flowers were an important part of Valentine’s Day as early as the 1920s. Oddly, there wasn’t much advertising about this in the 1920s. But in 1930 something triggered an explosion of Valentine’s Day advertising – maybe it was the Great Depression or maybe it was the 1929 St. Valentine’s Day massacre in gangland Chicago. Whatever the cause, Valentine’s Day cards, candy and flowers are all heavily advertised beginning in 1930. A 1933 advertisement for Spauldings on Water Street read, “A Valentine is a priceless messenger of your friendship. Ask to see our friendly Valentines. Your little friends will feel really important if you send them a Valentine through the mail. We have some delightful child mechanical novelties at 5 and 10 cents.” Batchelder’s Bookstore asked, “Is your wife still your sweetheart? Send her a Rust Craft Valentine.”

But maybe a card wasn’t enough. “The best Valentine of all,” encouraged Hilliard’s Flowers, “and the most appreciated is the gift of flowers.” Seward Drug store went with the candy angle offering “Valentine Hearts by Whitman, Colecrest, Lowney and Apollo” along with a counter full of perfume selections.

Valentine’s Day competed with both Lincoln and Washington’s birthdays. It’s not like these two long-deceased presidents threw a wet blanket on mid-winter fun – the Washington’s Birthday Ball was a common event – but Valentine’s Day added something that the patriotic holidays couldn’t have – expressions of love. If nothing else, this is something we could all use to break out of our cabin fever during these cold, snowy weeks, and with the beginning of Lent breathing down our necks, February 14th is as good a day as any to enjoy some cupcakes with friends.