Treasures in the Walls

This "Historically Speaking" column was published in the Exeter News-Letter on Friday, October 10, 2014. 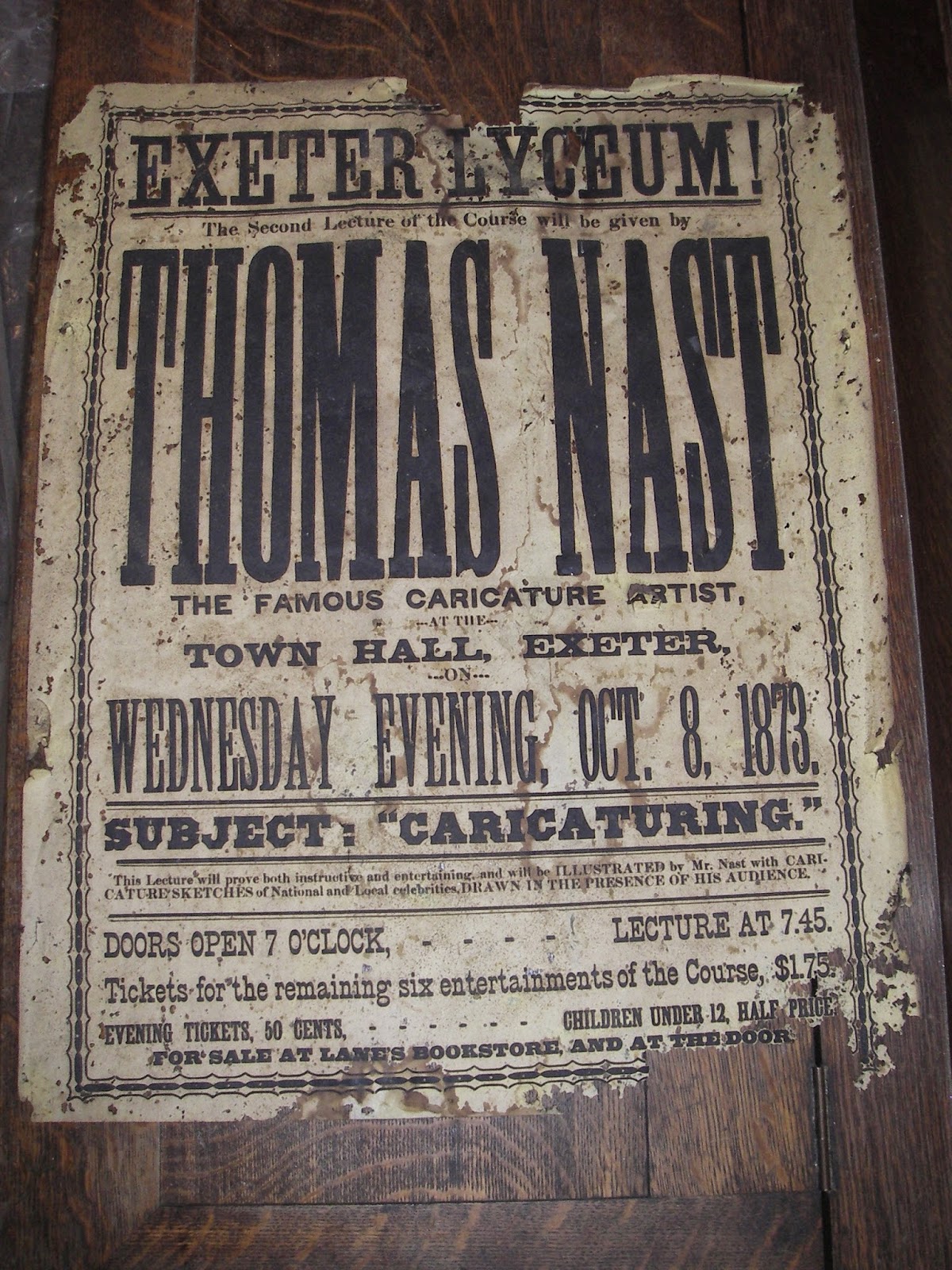 Back in the summer of 2011, a local couple was busily engaged in insulating their century old house on Cass Street. During the necessary demolition, they uncovered a surprise. Liz Morse then wrote to the Exeter Historical Society; “we found a poster nailed to a wall for a lecture by Thomas Nast in 1873. Would someone from the historical society like to come see it? We are considering framing it and returning it to its original location, but thought it might be of interest to you.”

She was right. It was of interest to us. Now before you decide to call us, please know that the Exeter Historical Society cannot simply play “Antiques Roadshow” with all callers. As a museum, we are not legally allowed to do monetary appraisals and, although we will occasionally purchase items at public auction for our collections, we generally only take donations.

That said, we love seeing the artifacts that people find hidden in their basements, attics and barns. And the Morses live along my usual walk home. The poster was magnificent, and warranted some further research about the house and the advertised lecture.

Although it doesn’t appear on the 1874 map of Exeter, the house on Cass Street most definitely existed in 1873 when the poster was nailed to the wall. We have a directory of Exeter published in 1872, which does not provide helpful information – like house numbers – but does give us the names and occupations of householders in town. For Cass Street, it lists more residents than the 1874 map can accommodate. Most likely, the map was laid out well before its publication date and by that time at least two new houses had been built on the street. The plot of land for the Morse’s house was purchased in 1868 by Oliver Lane, a local merchant. He never appears to have lived there and must have built it for rental income. There are four households from the 1872 directory that cannot be placed in any specific house when compared to census records or ownership deeds. Three are headed by skilled workmen; a stonemason, carpenter and shoemaker. The fourth is a mother and daughter who would later run a boarding house. Any of these people could have been the occupants of the house where the poster was found. And most likely, any of them would have been enthusiastic to attend the Thomas Nast program.

Thomas Nast was a popular illustrator and political cartoonist. Born in Germany in 1840, he’d arrived in New York with his mother and sister at the age of six. Although children usually pick up new languages quickly, Nast seems to have struggled and even as an adult still spoke with a heavy accent and found reading and writing very difficult. His wife helped him by correcting his poor spelling in the cartoons he created. Yet, or perhaps because of this, he was able to reach broad swaths of the American population including recent immigrants. He began work, at age 15, for Leslie’s Illustrated Newspaper, as a sketch artist after talking his way into the job. As the Civil War began, Nast joined the staff of Harper’s Weekly, where he would work for roughly 25 years. After the war, he turned to political cartoons, using his talent and wits to attack the political corruption that was raging in New York. His depictions of the Tammany Hall political machine, depicted as a tiger, and his caricatures of William “Boss” Tweed , the corrupt and ruthless Democratic party enforcer, are credited with their fall from power. Nast would go on to popularize the political party symbols of the Democratic donkey and Republican elephant that we still use today. He is also credited with the creation of Christmas as we know it today, with his drawings of Santa Claus and his toy shop at the North Pole.

In 1873, Thomas Nast was on a seven month speaking tour when he passed through Exeter. The ‘Exeter Lyceum’ program of lecture courses was thrilled to book him as a featured speaker. The review, published in the Exeter News-Letter the following week, raved; “Mr. Nast’s lecture was both entertaining and instructive, and his occasional foreign idioms and accent gave perhaps additional relish to the good things it contained. He commenced with a tribute to the fun-loving qualities of the American people, which he illustrated by choice examples; gave a short history of caricature, especially on its political side; and at length turned to what was of course most interesting to the audience, his own experience as a political caricaturist. From time to time he illustrated the subjects of his lecture, by drawing in colored chalks on a large easel in full view of the audience, some of those happy burlesques which have given him his world-wide reputation.”

Liz Morse reports that they did indeed frame the poster and it hangs near where it was originally found; “guests seem to find it interesting, and it gets us talking about our renovations (Ben loves that subject).”

Image: Poster found behind the wall in the house of Liz and Ben Morse on Cass Street. Advertisements, such as this one, were never meant to serve as documentary materials – they were considered disposable. Finding it intact provides us with a window into the interests of people in town in 1873. It has since been carefully preserved by the owners.
Email Post