Tales from the Winter Street Cemetery

This "Historically Speaking" column was published in the Exeter News-Letter on Friday, October 24, 2014. 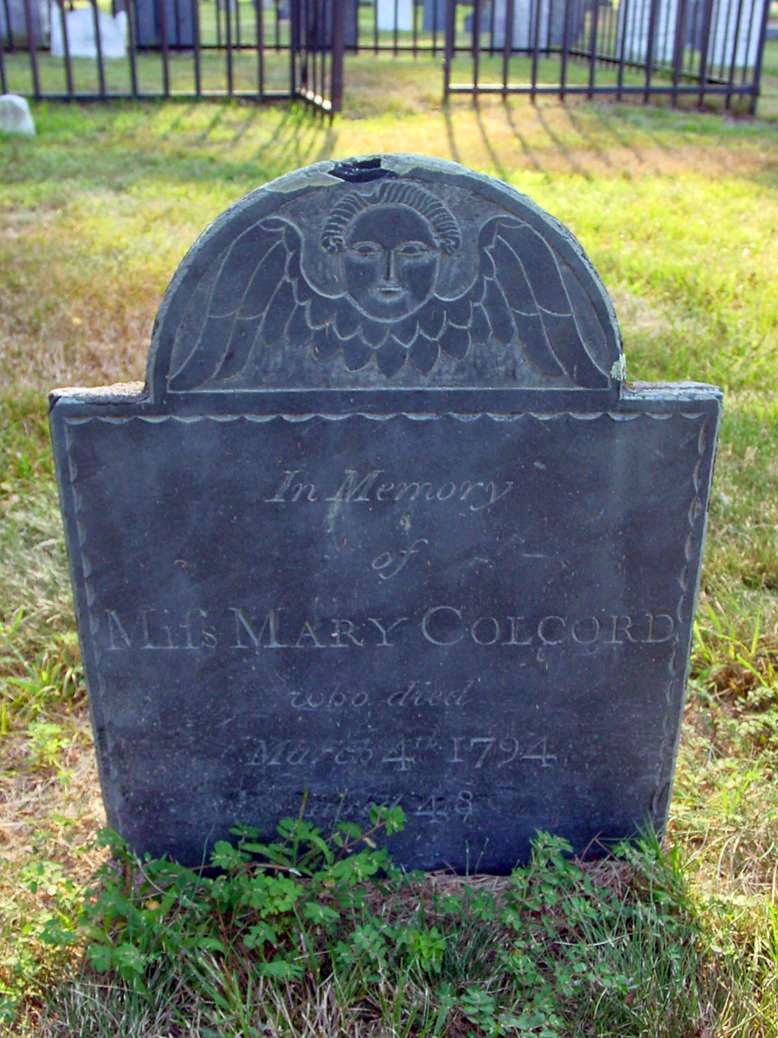 Exeter has dozens of small family graveyards scattered throughout town. Usually found in a corner of land long owned by a particular family, these burials can be hard to find. Records for small graveyards can be found at the Exeter Historical Society. There are no marked graves for the people who died in town in the 1600s – a hard truth for genealogists looking for their ancestors’ final resting places.

The earliest mention we have of any burial ground is in the town records from 1651. “It is granted to Mr. Dudley liberty to fence in that piece of ground where the graves are and to have the use of the land for grazing and feeding of cattle whilst he stayes in Exeter.” Reverend Samuel Dudley was the minister and the graves mentioned were most likely those surrounding the meeting house, which was near Salem Street. There is no longer any trace of the grave yard in this part of town. If there were gravestones, and none have been found, they were probably not the inscribed and decorated type we are familiar with today.

The second burial ground is located on the corner of Water and Green streets. Sometimes called ‘Gas House Cemetery,’ because a gas manufacturing plant once stood nearby, this is more of a family cemetery and there are only a handful of graves still there. A third early burial ground was located in the church yard of the Congregational Church on Front Street. In the early 1800s many of the graves were leveled to widen Front Street. Attempts to locate the stones in the 1930s found some of them and they were moved back to the church yard.

In 1742, the town received the land for the Winter Street Cemetery after the death of Colonel John Gilman. Gilman’s will donated, “forever for a burying place parte of that triangular piece of land in the common field aforesd that lyes near that which was lately the dwelling house of Samuel Sibley late of Exeter aforesd between the Road that leads from the Meeting house & that from the lanes end in Exeter aforesd to Kingston provided Sd town fence the Same within three years after my decease.” The town kept its part of the bargain and fenced the area. The triangular lot was truncated as Gilman left the three points of the triangle to each of his sons. Today, the points are not so obvious, one is built up with houses and shops, another holds the old town pound and a naval gun and the third has become a public playground (which includes a Barney-like bouncy ride – the reason many locals call the Winter Street Cemetery ‘Purple dinosaur cemetery’).

The cemetery served as the town’s public burial ground until the 1840s, when the Exeter Cemetery on Linden Street was created. There continued to be some burials in the Winter Street Cemetery in the decades that followed – mostly in family owned plots – and there were a few families that chose to have their ancestors disinterred and moved to the Exeter Cemetery. Still, if you are looking for the final resting place of Exeter’s Revolutionary War citizens, the Winter Street lot is the place to go. Strolling through a cemetery can reveal a lot of history and, providing you are careful, checking out the stones will tell you a lot about the people who lived here centuries ago.

In 1898, the Evening Gazette ran a story about the cemetery: “the old burying ground was surrounded by a two-board fence with two gates, one on Front Street for white people, and one at the back for colored people. The latter were all buried in the northeast corner of the yard. The bier house, so called, stood about where the Greeley house stands now, at the southeast corner. All the mourners, walked to the grave, and at short intervals, the bier was set down in order that the bearers might rest or be relieved by others.” There were not separate burial grounds in Exeter for white and black citizens, so everyone regardless of race or social class was interred in the same public cemetery. But the reticence to mingle unrestrained led to certain parts of the cemetery reserved for ‘colored’ citizens and paupers. Tobias Cutler, whose grave was recently found to be soiled with some type of tarry substance, was one of a number of black Revolutionary war veterans who settled in Exeter. His family went on to become businessmen in both Exeter and Hampton. Born into slavery, he was granted his freedom to serve in the Continental Army. Although his grave is located in the poorer section of the cemetery, he truly earned the right to be buried with the dozen or so other Revolutionary War soldiers in the Winter Street Cemetery. The presence of these men has led the Daughters of the American Revolution to adopt the cemetery and raise awareness of its importance.

Visiting the cemetery is to be encouraged. Walk among the stones and read the stories as you go by. Cemeteries shouldn’t be thought of as places of death or hauntings. They are the final chapter of everyone’s biography. In earlier times life was short. Children sometimes died tragically young. Husbands and wives called one another ‘beloved’. The art on the stones reflects beliefs about life after death and mortality was viewed with inevitability, sorrow or hope. But if you do visit, please take care. The Winter Street Cemetery is not seasonal entertainment. It is cherished by our town and is not a place for Halloween fun.