Remember, Remember the 5th of November

This "Historically Speaking" column appeared in the Exeter News-Letter on Friday, October 25, 2013.

The Puritans who settled New England weren’t keen on holidays. They refused to celebrate most of the festivals we consider to be ‘traditional’ including Christmas and Easter on the grounds that these were too ‘papish’ (read: Catholic), unbiblical and merely a debauched excuse for excessive drinking and hooliganism. But they did turn a blind eye to one British custom that was primarily marked by the young men and boys of the town – Guy Fawkes Day on November 5th. 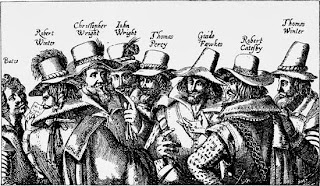 Back in Britain, the day remembered the attempt of Fawkes and his fellow conspirators to blow up the king and members of Parliament in 1605 – an event called the Gunpowder Plot. Fawkes, who was Catholic, believed this would remove the hated Protestants from government and return England to the true faith because, you know, terrorism always works well that way. Unfortunately for him, he was discovered standing next to 36 barrels of gunpowder in the basement of Parliament before he was able to light the fuse. Fawkes and his fellow conspirators were captured, tortured, convicted and executed in short order. The gunpowder plot was thwarted and should have been forgotten. But as the years passed and the government remained stoutly Protestant, people began to realize just how close they’d come to becoming a Catholic nation again. By the late 1600s, effigies of Guy Fawkes were burned every year on November 5th to commemorate the triumph over the plotters.

So, why did this weird holiday and not Christmas make it to New England? The ugly side of Guy Fawkes Day is its anti-Catholic message and not its anti-terrorist triumph. And the Puritans really, really hated Catholics, so much so that when young John Gyles of Pemaquid, Maine was taken captive by Natives and brought to Canada, his mother wrote to him; “I had rather follow you to your grave, or never see you more in this world, than you should be sold to a Jesuit.” What’s a little bit of mischief if it reminds the kids that the Pope is evil incarnate leading his followers into certain damnation? In America, Guy Fawkes Day was transformed into Pope’s Day. Boston took the lead in marking the day with rival gangs of apprentices and boys building parade floats with huge puppet-like caricatures of the Pope, the devil and any other momentary enemies. These would be wheeled around the city while the boys blew on horns, banged drums and created general mayhem begging for donations from the crowd. As the procession continued, the various gangs would try to destroy the float of their rivals. At night it all culminated with enormous bonfires and a great deal of drinking.

Accounts of Pope’s Day in Boston are many and some of our early patriots were eager participants. Historian and author Esther Forbes described the scene in her book, Paul Revere and the World He Lived In, “For twenty-four hours Boston was in the hands of a mob which custom, if not law, had legalized.” The uncontrolled riots were a contributing influence on the revolutionary fervor that would grip the city before 1775.

In New Hampshire, as in most small communities, the night was more a nuisance than anything. There were few Catholics in the region to offend with its overt prejudice. The only account of the event happening in Exeter is from Charles Bell’s History of Exeter, where he relates the town’s response to the hated Stamp Act in 1765. “Three effigies, representing, according to the Rev. Mr. Rogers, the pope, the devil and a stamp master, but according to another eye witness, Lords North and Bute as two of the characters, were carried about the streets of the town, and finally taken across the river, to the front of where the jail afterwards stood and set fire to and burnt to ashes.”

Perhaps it was this political turn that prompted New Hampshire, in 1768, to pass an act prohibiting Pope’s Day festivities. “Be it enacted by the Governor Council and Assembly that henceforth all such clubs and companies and assemblies for celebrating or commemorating the day aforesaid with the usual shows and mock representations of the Pope and other exhibitions usually carried from place to place with the rude noisy speeches and demands of money or liquor frequently made at peoples doors and the making of bonfires are strictly forbidden to be done.” But although the act was passed and punishments were threatened, Pope’s Day continued to be observed throughout the region. It finally came to a screeching halt in 1775 when George Washington, who had been courting the support of Canada, was horrified to discover his New England troops preparing for the event. He issued a directive stating, “As the commander in Chief has been apprized of a design form’d for the observance of that ridiculous and childish custom of burning the effigy of the pope – he cannot help expressing his surprise that there should be officers and soldiers in this army so void of common sense as not to see the impropriety of such a step at this juncture; at a time when we are soliciting, and have really obtain’d, the friendship and alliance of the people of Canada.” Officially, Pope’s Day was over.

The remnants lived on, in a fashion, under the name ‘Pork Day’ for over a century in Portsmouth, where young boys stalked the streets up through the 1890s plugging each other with chestnuts and carrying pumpkin lanterns. Over time, Guy Fawkes and Pope’s Day were forgotten as the modern observance of Halloween grew in childhood importance. It’s probably best that this particular holiday has ceased to exist.
Email Post