This "Historically Speaking" column appeared in the Exeter News-Letter on Friday, September 27, 2013.

In 1891, the Exeter News-Letter took note of the rising immigrant population in town, “What a cosmopolitan population Exeter is acquiring, to be sure. Our Italian residents are rapidly growing in numbers. Then we have our Polish colony of upwards of fifty souls, and rapidly increasing. Our quota of French Canadians is considerably larger than the Poles, and then we have our earlier accessions of English and Irish, the latter counting well into the hundreds. Smaller representations are here from Scotland, France, Germany, Russia, Bulgaria, China and other countries.” The editor, John Templeton, was an immigrant himself, having arrived at the age of 10 from Scotland with his family.

Exeter’s original European population had come from England in the 1600s, and the town remained primarily English for its first two hundred years. Exeter, actually New Hampshire in general, considered itself to be a Protestant and English outpost – the New Hampshire Constitution affirmed this by mandating that elected state representatives had to be Protestant, which was only repealed in 1877. But in the mid-1800s, New Hampshire was becoming an industrialized state, and this attracted workers from farther ports. Exeter, like the rest of the state, found itself changing as the new population brought different customs to town.

Irish immigrants began trickling into town just after the Civil War, and after that the slow stream of people from Canada became a sudden flood. Canada found itself in dire economic straits in the late nineteenth century. The short growing season and expanding population produced intense poverty. With traditional large families, both English speaking Canadians from the Maritime Provinces and French Canadians from Quebec began to see New England’s textile mills as a means to improve life. The journey to America was hardly the arduous one traveled by Europe’s immigrants – from Canada one merely had to take a train to Boston, Manchester or Lewiston. Those arriving from New Brunswick and Prince Edward Island quickly assimilated into Exeter. Speaking English and worshipping in the local churches was simple for this group. 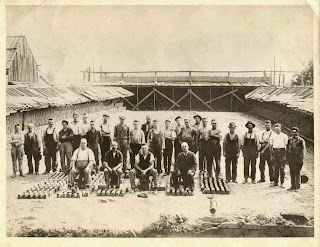 French Canadians had a bit more difficulty moving within Exeter society. Not only was the language difference a challenge, but they were Roman Catholic to boot. Exeter was founded by Puritans who soundly rejected anything and everything that had to do with the ‘Romanish’ church. No liturgical calendar was followed in town – there wasn’t even a celebration of Christmas, which was thought of as a pagan bacchanalia by most of the town’s population. In many parts of New England, French Canadian immigrants banded together to protect their language and religion creating neighborhoods of “Little Canada.” Exeter was too small for this. They had to figure out how to bridge the gap between English and French customs. The new immigrants learned English and sent their children to the public schools.

But religion was non-negotiable. By the 1880s, when Exeter’s French Canadians began arriving in large numbers, there was a fledgling Catholic church in town. It had been established by Irish immigrants who arrived a few decades earlier. Mass was, of course, said in Latin, so there was little difficulty for congregants to participate, but it must have been tough when one’s home language was French, the local language was English and the church’s language Latin. The immigrant’s children quickly adapted to this crazy tower of Babel – but then, the usual pattern of immigrant’s language skills hasn’t changed over time. The first generation speaks the home language and haltingly learns the local language, their children comfortably speak both and grandchildren speak only in the local language. Thelma Cote Barlow, in an interview taped by the historical society for the Girl Scouts in 2006, recalled that when she started school at age 6 in 1921, “I couldn’t speak English and we had a lovely neighbor who was a teacher in first grade. She took me to school until November and she told my parents that by September I’d be able to speak English and I’d be fine in school.” “And did you?” I asked. “Yes! And I forgot how to speak French as I grew older!”

In 1901, Joas Jette, who ran a laundry in town, attended a French congress in Springfield, Massachusetts. The Exeter News-Letter reported, “he was questioned regarding Exeter’s French population. He guessed 85 families and 500 people. Since returning to Exeter he has made a careful canvass for Rev. John Canning of the town and Eno’s brickyard. He found 114 French families in town and 11 at the brickyard, numbering respectively 574 and 48 persons, a total of 125 families and 622 persons.” Exeter’s population at the 1900 census was 4923 people with 1006 listed as ‘foreign born’ – making French Canadians the largest immigrant group in town.

Exeter today is still filled with people of French Canadian ancestry. Of the six obituaries published in the Exeter News-Letter on April 2, 1926 three of them were people who had been born in Quebec Province and found their way to Exeter. “Mr. Louis Ritchie, Exeter’s first citizen of French-Canadian birth, was buried in Exeter last Monday, Rev. Daniel J. Cotter performing a committal service after the funeral in Newmarket, where Mr. Ritchie had latterly lived with a son. He came to Exeter about 1870 with the late Louis Novell, and soon anglisized his name from Richard, as did his early follower, Mr. Beaudoin to Boardman. All were held in the highest esteem, as have been others of their compatriots.”

Thanks for the great article!