This "Historically Speaking" column appeared in the Exeter News-Letter on Tuesday, August 20, 2013. 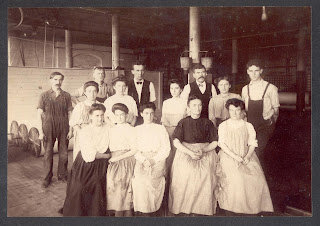 When, in 1829, the Exeter Manufacturing Company erected its textile mill on the eastern bank of the Squamscott River, it created the largest building in town. The industrial revolution in New England had proven that such mills could be wildly profitable, and to the local investors it was well worth the money spent. The bricks used in construction were locally purchased, but the machinery was largely imported from England. Power was provided by the Exeter Mill and Water Power Company, which had spent the better part of the previous year buying up all the smaller mills upstream on the Exeter River to ensure the new mill, would have enough power. With four huge water wheels, the mill was entirely run by water power until the 1870s.

The first employees to work in the mill were women and girls, similar to the workers in most New England mills. In 1938, Frank Goodale wrote his Historical Sketch of the Exeter Manufacturing Company, which was then read at a meeting of the Exeter Historical Society. In it, he describes conditions at the mill: “The working hours were long and the regulations strict in the old days. Deduction of time for eating left the average working day 12 ¾ hours prior to 1847. The operatives were largely women and girls. No female was allowed to live more than five minutes’ walk from the mill and they were obliged to work two and a half hours before breakfast.”

By the 1850s, new workers were available – the potato famine in Ireland brought Irish immigrants to New England and an influx of French Canadian families meant that finding people would not be a problem. Left out of the workforce were the many African Americans – descendants of Revolutionary War veterans – who lived in town. Mill owners would not hire Black workers, preferring instead to hire white immigrants, some of whom could barely speak English.

By 1854, the workday was reduced to 11 hours, with work beginning at 6:30 AM in the summer and 7:00 AM in the winter. The mill must have been a dark place to work in the winter months; the only available lighting was through the use of whale oil lamps. When the old office building was razed in 1918, Goodale reports that, “several hundred of these lamps were found stored in the attic.”

In summer, the top floors of the building were inhumanely hot and oppressive, and since the mill had to shut down when water levels were low, sometimes the workers got an unexpected vacation – without pay, of course. Before child labor laws were passed in the early 1900s, it was not unusual to find children working in the mill. After that date, children had to be 14 years old to seek employment. The 1903 school census indicates that 7 children received a work certificate and left school to work beside the adults at the mill. Men did the heavy work of moving bales of raw cotton and finished fabrics. They also worked in the dangerous bleachery with its toxic chemical stew and fixed the large equipment. Women and children tended the looms and spinning machinery. Margaret Kucharski remembered, “In the twenties, there was no water inside the factory at all. You had to go outside to the spring, and drink out of a big metal pail, with a dipper.”

If you’ve been lucky enough to catch a viewing of the “March of Time” episode, “New England’s Eight Million Yankees,” you’ll see footage of the interior of the Exeter Manufacturing Company in 1941. The mill was busy during the war with plenty of work for anyone who wanted it. Oddly, the film is careful to avoid showing women at work, but women made up a sizeable portion of the workforce even before the war. Kucharski recalls, “Lots of women worked during the twenties, in the weaving and spinning rooms. Twelve hours a day. No breaks, you worked right through, you had to eat lunch on the floor, couldn’t go anywhere. There were no coffee breaks.”

The long work hours were reduced to eight hours during the depression when labor standards changed with the New Deal. The mill remained open throughout the 30s, and World War II brought with it round the clock production, increasing the workforce. The company employed between 200 and 300 people before the war, and the numbers swelled to over four hundred during the conflict.

The Kent family ran the mill from 1895 until 1966, when it was sold to Deering-Milliken. Hervey Kent, Jr is still remembered in Exeter for his opposition to unions – there never was a union at the Exeter Manufacturing Company. During the 1930s and 40s, it seemed like Hervey Kent ran the entire town with a controlling interest in the Exeter Banking Company. His brother, Richard, ran the Exeter Handkerchief Company on Lincoln Street.

The Milliken purchase in 1966 changed both the work and the conditions at the mill. Air-conditioning was installed, wages raised and cafeteria facilities installed. The mill no longer produced cotton fabrics – it instead churned out synthetics for industrial and automotive use. Improved automation reduced the number of people working there. The mill changed hands again in 1981 when Nike Shoe Company moved in to produce simulated suede for sneakers. This business move out two years later and the mill was repurposed into apartments, preserving the buildings that were so integral to the town economy for over 150 years.

Photo: Exeter Manufacturing Company employees around 1900. The mill, primarily run by the Kent family, produced cotton textiles for over 150 years.

DEERE stock price said…
I very appreciate it and find all of the info incredibly useful.
September 18, 2014 at 4:15 AM