This "Historically Speaking" column appeared in the Exeter News-Letter on Tuesday, August 6, 2013.

To get a better picture of everyday life, historians look to diaries and memoirs. There are several types of diarists – those who record events: ‘went to grocery store. Weather fair. Spoke with Mrs. Watson’ – and those who record thoughts. Hannah Brown of Exeter mostly recorded her thoughts. October 24, 1857; “Since I took my pen, there has nothing new happened worth writing you.” Thanks for that, Miss Brown.

A memoirist, however, writes with a purpose. Usually, he or she wants to talk about what their life was like and the mundane ‘dinner at 6:00 – chicken, potatoes, corn’ turns into a commentary on what the food was like. One Exeter memoirist, Elizabeth Dow Smith Leonard, wrote her thoughts in 1878 remembering what life was like when she was a girl. Sure, she’s offering us an adult’s version of what her childhood was like, but this provides us with the reflection necessary to understand how much things have changed and that was her goal. 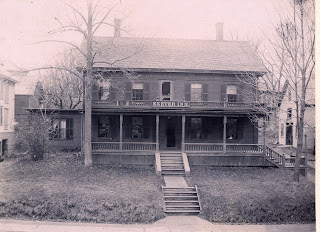 Elizabeth Dow Leonard was born in Exeter in 1806 to comfortable conditions. Her family lived on Front Street in one of the finer houses until she reached about the age of 10. Then, like so many families, they experienced some financial downturns that forced the family to sell most of their real estate and settle into an older house on Water Street. There is an edited version of her memoir, “A Few Reminiscences of My Exeter Life” that was published in 1972, which leaves out some of her early life, but the original manuscript resides at the Exeter Historical Society.

Unmarried into her late twenties, she was nearly considered an old maid. Leonard helped her mother manage the household and taught a bit of school on the side. She was well-educated in spite of her criticism of public education for girls in the first part of the 19th century. “At the age of sixteen, after sufficient instruction was supposed to have been given in those schools to keep us from fire and water, we were sent out of town to boarding school, where we were taught general literature and gentility, which unfitted us for the practice of all the duties we had ever learned before.” She was sent to a private ladies school in town where the focus was placed on making shirts. “Oh, the time and misery spent on that shirt! Our brothers learned all their declensions in Latin grammar while we were toiling over it. The very fine waistbands were twice stitched, and if the number of threads taken exceeded two, the work was taken out and done over; then the shoulders and collars were dealt with in the same way, and the gathering was done just as strictly by the rule of two threads taken and four left. We were advanced to do the higher mysteries of the art, and our brothers were almost ready for college.” This shirt making skill, “soon became superfluous, as our brothers early learned to prefer those they found in stores.”

The lack of opportunity for women annoyed Leonard into her later years. Writing the memoir in 1878, even as Exeter had improved womens’ education with the creation of the Robinson Female Seminary, she still decried the inequality, “we are still of a belief that whatever woman knows even in 1878, she must learn at the point of the bayonet. While man votes for her, her advantages for education will always be kept inferior, and whether St. Peter or St. Paul hold the keys of knowledge, till she wrests them away, the doors will be kept bolted.”

She agreed with Jeremiah Smith’s first wife, Elizabeth, who advised her on the realities of married life, “She was the first woman who disabused me of the supposed felicity of honeymoons, the food of romances and silly girls, who so seldom look into life beyond them. Have not all women passed through very much the same discipline, being courted in poetry and living in prose?”

Nearly thirty when she married Samuel Smith, a consumptive man who died a few years after their union, Leonard must have wondered about the silliness of romance. Her second husband, the Reverend Levi Leonard, was a Unitarian minister from Dublin, NH. The couple seems to have split their time between the two towns and Levi was, for a time, in charge of the editorial content of the Exeter News-Letter. Elizabeth was able to express herself during this time as the News-Letter noted after her death, “she was an extensive contributor to the literary department of the News-Letter at the time her husband was the editor.” But there must have been some grudging resentment that her entrance into the literary world was dependent on her association with her husband. No wonder she so often grumbled about limitations placed on women.

Elizabeth Dow Leonard didn’t live long enough to see women gain the right to vote. She never knew that one day women would enter college at rates higher than men. She wouldn’t know Elena Kagan or Condoleeza Rice, but if her memoir is any indication, she would have applauded their ambition.

Photo: Childhood home of Elizabeth Dow Leonard taken around 1895. The house stood on Water Street where today the Squamscott Building stands. In 1895 it was called the Exeter Inn. It was razed in 1958.
Email Post