This "Historically Speaking" column appeared in the Exeter News-Letter on Friday, August 10, 2007.

Just about everyone in Exeter knows that George Washington visited the town in 1789. It was part of his presidential visit to see the New England states. Prior to the 1950’s, when New Hampshire became the Primary State that it is today, few candidates made their way to Exeter. And let’s face it, once the primary is over and the endless parade of candidates has packed up, the winners don’t return. Maybe that’s why we hold Washington’s visit in such high regard. He was already elected when he stopped by to check up on us. It was like a phone call from your Dad, “How are you doing? How’s the weather down there? Don’t forget to get your oil changed. Bye, now.” 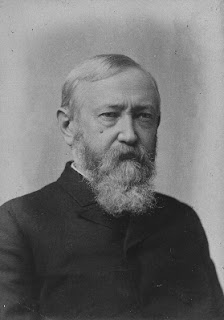 In the summer of 1889 excitement was high in expectation of another rare presidential visit. Benjamin Harrison, on his way to Bar Harbor, Maine, was due to stop briefly at the Exeter depot on Lincoln Street. Harrison is one of those easily forgotten one-term presidents, the bologna in the Grover Cleveland sandwich. During an era when machine politics could put modern lobbyists to shame, he managed to defeat the incumbent Cleveland by losing the popular vote but winning the Electoral College. Cleveland would fight back in the next election, much to the dismay of Exeter’s Republicans.

He was a protectionist and believed in high tariffs, supporting the McKinley Tariff Act that ultimately led to the disastrous economic depression of the 1890’s. But he also saw six new states admitted to the Union – Montana, Idaho, Washington, Wyoming and the Dakotas. Like two squabbling twins, North and South Dakota each wanted to be granted statehood before the other. Harrison decided the issue by covering the bills, shuffling them, and then signing them quickly without ever knowing which came first.

There are two accounts of Harrison’s visit to Exeter. The Exeter News-Letter reported that “the presidential train drew into the station at Exeter at fourteen minutes past ten. Citizens of Exeter and neighboring towns, irrespective of party and including many ladies, crowded the platforms. Twelve hundred would be a moderate estimate of their number, and good judges set it at fifteen hundred.” The Exeter Gazette, however, was less caught up with specifics. “Shortly after 10 o’clock the special train bearing the President arrived at the depot where a crowd numbering several hundred was awaiting his arrival. As soon as it came to a standstill a rush was made for the end of the rear car where the President was discovered standing on the platform.”

At this point, the two reporters (most likely John Templeton of the News-Letter, and James Wingate of the Gazette) tell similar tales. Templeton: “men swarmed upon the track and surged towards the train until they could grasp the President by the hand. Ladies and children crowded upon the car steps for the same purpose.” Wingate: “the President stood there shaking hands with the crowd who surged around him in the desire to seize his hand. There were quite a number of ladies among the number who had the pleasure of shaking hands with the Chief Magistrate.”

Both mentioned the ladies as if surprised that women could be interested in the President. Politics were, after all, part of the messy world that was owned by men. The ladies had no more say in government than the children. Perhaps they were attracted to the outfit the President was wearing. The News-Letter wasn’t particularly impressed, “The President wore a suit of drab, the Prince Albert coat closely buttoned,” but the Gazette could hardly contain itself, “The President, who was bare-headed, wore a neat fitting gray Prince Albert suit and a black four-in-hand tie.”

The whole event was over quickly. The News-Letter, in its typically careful way summed up the visit, “The train remained in Exeter seven minutes.” “After a stop of about fifteen minutes the train proceeded on its way,” responded the Gazette.

Whether he was well dressed or in “drab,” stayed for seven minutes or fifteen, the President’s visit excited the town to a degree not felt since James K. Polk stopped by thirty years earlier. A few other sitting Presidents would visit – Theodore Roosevelt, Harry Truman, and Gerald Ford, but they were here for campaign purposes and Roosevelt’s train didn’t even stop – it just slowed down at the depot. Harrison may not have stepped off the train, but at least he stopped.