by Barbara Rimkunas
This "Historically Speaking" column appeared in the Exeter News-Letter on Friday, October 14, 2011. 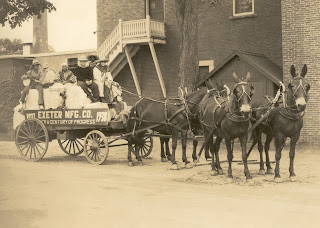 In 1938, the town of Exeter celebrated its 300th birthday. A grand parade was held on July 4th and was, according to the Exeter News-Letter, “easily the best ever witnessed in Exeter.” One of the town’s premier employers, the Exeter Manufacturing Company, chose the plantation South as its float’s theme. Described by the News-Letter as “Cotton and Colored Folk”, the float bore the title: “Exeter Manufacturing Company: 1827-1938 Over a Century of Progress.” It was a curious choice, but an apt depiction of the conflicted historical perspective most northern towns have with their relationship to slavery.

To provide some social framework, it’s important to note that Margaret Mitchell’s nostalgic, if historically dubious, Gone With the Wind, had been published the year before Exeter’s tercentenary parade. The old South was hot, in much the same way pirates and vampires are hot today. If we are very generous, we can view the parade float as a reflection of the fad of the time, when it was not unusual to see caricatures of African-Americans lurking in our culture. Minstrel shows were still wildly popular in town and would remain so through the 1950s.

But deeper than just a cultural fad, the float holds a great deal more accuracy than one might imagine. There were no cotton plantations in New Hampshire. Cotton requires a hot climate and better soil than we have in New England. Slavery was legal in New Hampshire until 1857, when the legislature finally decided to abolish a practice that had already died out of its own accord. Portsmouth historian, Valerie Cunningham, remarked in her book, Black Portsmouth, “Individual emancipation and gradual abolition notwithstanding, white Yankees promoted slavery by indifference to its persistence and its expansion elsewhere, and by consuming slave-produced products.” Every bale of cotton spun into thread and woven into fabric at the Exeter Manufacturing Company from its beginnings until 1861 was grown, tended and harvested by enslaved hands. The 1938 parade float was a celebration of that system.

Exeter Manufacturing Company was well aware of its past. The factory had struggled during the Civil War when its supply of cotton had been cut off. In August of 1861, shortly after the war had begun, the board of directors announced that the factory would close down for a while, leaving the mostly immigrant employees out of work. The American Ballot, an Exeter newspaper of the time, announced the news with the snarky comment, “operations have been suspended in the mill, and the operatives are to have a vacation of two months, which assurance gives no pleasure to many of them, much as they need rest and relaxation.” It didn’t occur to anyone to consider the lives of the field hands that had picked that cotton, instead the focus was placed on local workers. Hannah Brown, a seamstress in Exeter, noted in her diary early in the war, “Business is dull as ever, very little work to be done, the war puts a stagnation on everything. If the war continues until winter it will be so hard for poor folks. I don’t know what will become of them.”

The two month furlough turned into an entire year. The mill sat idle, yet the stockholders at the 1862 meeting were rewarded with a dividend of $25.00 per share. The trustees of the mill had cleverly determined that the real profit would be had from raw cotton. When the mill shut down in August of 1861, the cotton in the warehouse was carefully saved until the price soared the following year. Other textile mills were happy to buy it. This tactic only worked for that first year, however, and once the cotton was sold the company needed to find a new source of income. No one had thought the war would last as long as it did. The Exeter News-Letter is silent for the remainder of the war on how the cotton mill continued, but a local minister, Elias Nason, mentioned in his published account of the war that, “about one-third of the Exeter Cotton mill is in operation” in January of 1863. It was likely that the mill obtained cotton from any source it could find – including occasionally buying mattress filling from local residents, which was noted in the Lowell newspapers later that same year. The records of the stockholders meetings make no mention of where the cotton came from during the latter part of the war; they are filled, instead, with the time and place of meetings and the unanimous re-elections of the board members.

There was talk of turning to Central America for cotton where, “both native labor and free negro immigrant labor can, it is said, be obtained and the quality of the cotton there raised is known to be excellent,” the News-Letter reported. The comment reflects the desire of northerners, at least by the end of the Civil War, to obtain cotton farmed by free hands. The end of the war brought about great expansion in the output of the mill, and this is the usual record we find when reading the mill’s history. Steam engines installed in the 1870s, but never any mention of its participation in America’s “peculiar institution” of just a decade before.
Email Post