When Trick or Treating Came to Town

by Barbara Rimkunas
This "Historically Speaking" column originally appeared in the Exeter News-Letter on Friday, October 30, 2009.

Halloween is that weirdest of holidays – a children’s event that adults also celebrate – not quite official, you don’t get the day off school, but only the most sadistic of teachers would assign homework on trick or treat night. It was, in Europe, a religious festival with deep roots. In the United States, it emerged at the end of the nineteenth century as a light-hearted affair. 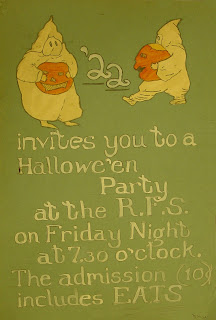 To track down when Halloween became a holiday locally, we turn to the local newspapers. As early as 1891, there are notices of parties at private homes: “Halloween parties were given Saturday night by Mrs. Dr. J.E.S. Pray and by Miss Lillie Colton”. Costumed dances were hugely popular in Exeter in the first two decades of the twentieth century. Trick or treating, however, was a much later development.

Official events are easy to spot. But the unofficial Halloween is a bit more slippery. Like the Fourth of July, which was often a loud and unruly nighttime event, Halloween provided a time when local kids let loose with mild vandalism that generally went unpunished. Clothes lines were cut down, fence gates and wagon wheels were often removed and even the family outhouse might be found in a different location when morning arrived. “Two students charged with extinguishing street lights are to have a hearing before Judge Shute next Saturday,” noted the News-Letter in early November of 1891.

Most of the activity was more nuisance than harmful, but it created an atmosphere of hooliganism that wasn’t tolerated the rest of the year. In 1943 – the year before trick or treating began – the Exeter News-Letter noted, “considerable damage was done Sunday night by hoodlums. Three of the cement benches on the Parkway were rolled into the river, an express truck from the railroad station was hauled on top of the steps at the Front Street entrance of the Seminary, a mail receptacle box from Elliot and Front Streets was moved into Phillips Hall and several sections of fences on Pine and Front Streets were ripped down.”

The first documentation of trick or treating in the archives of the Exeter Historical Society is a diary entry of Helen Tufts who, on October 30th, 1944, noted the date as, “Beggar’s Night: ‘Beggars’ came – 3 lots!”. This was the first time she mentions this kind of activity. The Exeter New-Letter never mentions children going door to door before this date. It’s odd that trick or treating began during the sugar rationing days of World War II, but this was when it was first reported in other parts of the country as well. Perhaps most of the treats were apples, nuts and popcorn. It’s also to be noted that the kids were out on October 30th – the traditional “mischief night” - rather than Halloween proper on October 31st. This is still done in much of the state of New Hampshire, and sets us apart from the rest of the country.

In 1948, in an effort to curb some of the unruliness, Ben Swiezynski, Jr., a local photographer, began the tradition of showing free movies on Halloween night at the Town Hall. “Two and one-half hours of entertainment is scheduled for the youngsters who are urged to come early to get good seats.”

By 1950, trick or treating was in full force. In 1957 it was reported that, “no incidents of mischief requiring the attention of police were reported last night. Residents, however, report a heavy run on ‘treats’ made available for the masked ‘goblins.’” Helen Tufts also noted the heavy turnout, “Around 50 Trick or Treaters – my supplies gave out at 7:30 so I wrote a letter to Barbara in the bathroom so no light would show.”

Trick or Treating still requires the participation of both the children and the residents. Although some adults consider it a type of extortion - and we have had a few notorious incidents, like when our local white supremacist, Tom Herman, in 1990 handed out candy on Salem Street in full Ku Klux Klan regalia, a teachable moment if ever there was one - on the whole it’s a fun time for everyone. Sometimes the only way we get to meet our neighbors is when we dress up the little urchins and go door to door. For their part, kids define the word “neighborhood” as the area one can reasonably trick or treat in two hours, and neighbors are sometimes remembered as “the guy in the goofy pumpkin sweatshirt who gave out orange taffy” instead of “Mr. Nickerson.” But really, what’s wrong with a little toilet paper decorating the maple tree? It’s only once a year, after all.
Email Post