Lady Justice is Watching You

by Barbara Rimkunas
This "Historically Speaking" column appeared in the Exeter News-Letter on Friday, July 8, 2011. 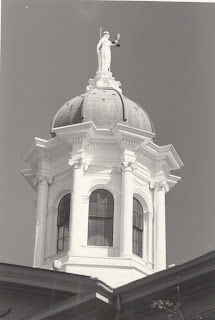 High above the street level in downtown Exeter, Lady Justice stands guard over the town. In 1855, when our town hall doubled as the county courthouse, the statue was erected with little fanfare. It was the town hall itself that attracted everyone’s attention. The decision to build a new town hall was the culmination of a two year battle between bickering factions of townspeople. Should it be a simple structure reflecting a small town or a grander design reflecting a vision of Exeter as commercial center?

In the end, the visionaries won, and the new Town Hall housed both the offices of the town of Exeter and Rockingham County – including the county court. As part of his design, architect Arthur Gilman included a large wooden statue of Lady Justice standing tall on the very top of the cupola. Construction began in May of 1855.

There was little statuary in Exeter in at that time. Although the town wasn’t aware of it, we had in our midst a little boy who would one day become one of the nation’s most treasured sculptors. Daniel Chester French was born on Court Street in 1850. His young eyes must have wondered about the magical lady atop the town hall cupola. French would go on to sculpt the Concord “Minuteman” and the Lincoln Memorial’s seated Abraham Lincoln. But in his younger days, Lady Justice was the only statue he knew.

She was hoisted aloft when French was 5 years old. The Exeter News-Letter commented, “Since the elevation of Justice, which we confess looks perplexed at its location on the dome of that building, the community, having the fear of her two-edged sword and scales before their eyes, are walking soberly and discreetly, and if vice is still abroad, she shrinks into cellars or retreats behind the good lady’s back.”

Popular depictions of Justice often involve the elements seen on our statue. In a tradition dating back to ancient Greece, justice is portrayed as a woman. In one hand she holds a set of scales for weighing the evidence before her. In her right hand, she grips a double bladed sword of justice, ready to mete out punishment quickly and efficiently. A bit like your own mother, really. Maybe that’s why Justice is always a woman.

Exeter’s Justice, like many similar courthouse statues, is blindfolded. Although it may seem that justice should be eagle-eyed, checking into every bit of possible evidence, the blindfold is symbolic of objectivity. Justice should not be swayed by outward appearances or the court of public opinion. The evidence is weighed carefully and a decision is reached.

Her presence in the town square was quickly used to bolster the temperance movement. Before the Town Hall was even officially dedicated, a letter writer to the News-Letter advised that she should, “make it certain that nothing is yet sold in Water Street which ‘men may put into their mouths to steal away their brains.’” 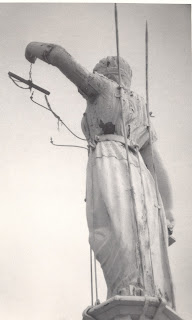 Justice was never able to avoid the one thing that was irresistibly attracted to her – lightning. Over the years she was struck many times and an intricate system of lightning rods was installed. Two main rods jutted from behind her like antennae and attached to a grounding system that encircled her waist. Close-up, the statue must have looked like she was caged in a medieval torture device.

A Halloween storm in 1917 nearly destroyed her. “In Exeter,” reported the News-Letter, “the most notable damage wrought by the wind was to the statue of Justice surmounting the Town Hall cupola. This was tipped to a dangerous angle and there were grave fears that it might topple over. Fortunately, lightning rod wires and other supports averted this misfortune.” The statue was carefully taken down and assessed for damage. “Exposure to the elements for more than three score years has much damaged the statue, and much of the wood is badly decayed.” However, repairs were made and the statue was re-set on the cupola in time for the New Year.

By 1991, she had taken quite a beating. Aloft for 136 years, she was nearly blown to bits by the remnants of Hurricane Bob. Town officials decided that the piecemeal repairs were no longer enough. The statue was removed and carefully reproduced by sculptor Langford Warren of Kittery, Maine. His pencil marks can still be seen on the original statue that now resides in the Exeter Historical Society. Her twin, made of sturdy mahogany rather than the original’s pine, stands proudly atop the Exeter Town Hall. The building no longer doubles as a courthouse, but the intent of the statue still holds. As a letter writer to the News-Letter wrote back in 1855, “the artist and sculptor may paint and mould the form, but the fire from heaven which makes it a living soul can neither be stolen nor created.”
Email Post