by Barbara Rimkunas
This "Historically Speaking" column appeared in the Exeter News-Letter on Friday, July 22, 2011. 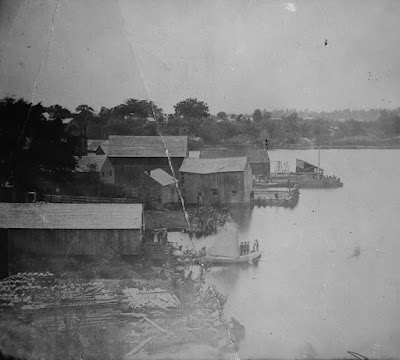 In 1872, there were over 150 regattas held in North America. The schoolboys of Phillips Exeter Academy decided they should hold a regatta of their own. The Boat Club at the academy was still in its infancy and had not yet begun to encourage rowing as a team sport.

Exeter’s downtown merchants still shipped goods up and down the river in 1872. Gundalows carried lumber, bricks and fish and schooners were towed into the harbor with tons of coal. Alongside the commercial traffic were many different types of small boats. Some were pleasure boats, others were tough little rowboats and canoes used by sportsmen for fishing and hunting. True rowing sculls, as we are used to seeing today, were rare on the river.

They set their ‘grand regatta’ for a Wednesday afternoon in late Spring. Then, as now, students at the academy had only a half day of classes on Wednesdays and Saturdays. The afternoon was free and the boys were only lightly supervised. They scrounged boats from wherever they could and determined to hold four separate races.

The first race was single scull. Four boys were set to start the race, but when the starting line-up was called two of them dropped out. “Harwood and Hodges, nursing their strength to keep it fresh for the four-oared race, failed to make their appearance,” reported the Exeter News-Letter. Perhaps they were unable to find a boat small enough for the race. The remaining two racers, Charles Bell, class of 1872, and Robert Blodgett, class of 1873 had decidedly different types of boats. Blodgett had a racing scull, but the best Bell was able to come up with was a heavy dory called a ‘wherry’. He’d fitted it out with racing outriggers to hold the oars high above the water, but it still wasn’t up to the challenge. The judges generously gave him a 12 second handicap.

The News-Letter’s fledgling attempt at sports writing read as follows, “The word ‘go’ is sounded, and the race begins. Blodgett with a firm and steady stroke pulls as for dear life; Bell keeps along space, when a sad mishap occurs; his out-riggers break, and Blodget wins the race and the prize, a silver ladle; time, 6.58; course, 1 ¼ miles.”

Three boys were entered in the sailboat race, but as in the first race not all of them made it to the starting line. William Swift, of New Bedford, Massachusetts, didn’t quite get there in time with his lapstreak centerboard boat. Lapstreak, or lapstrake, boats are made with overlapping planking like a Viking boat. They’re strong, but slightly less agile in the water. The two remaining boats in the sailing race were a flat-bottomed boat called Mary Jane, captained by Trueman Heminway, class of 1873 and the keel-bottomed Flying Dutchman with Isaiah Thomas, class of 1872 at the helm.

The Flying Dutchman took an early lead, but ran aground on the third tack, leaving the Mary Jane as the only survivor to cross the finish line. Heminway won a silvered fruit dish as his prize.

Neither of these first two races satisfied the onlookers – considering both had been won due to mechanical problems. The real race of the day was the four-oared contest. Two teams readied themselves for the race; the Una, a lapstrake racing shell representing the Class of 1872 and the Wyoma entered by the class of 1873. Both carried crews of five boys – four rowers and one coxswain. “While the Una crew boasts the best oar – Jones, the popular man of his class, the Wyoma’s friends rely upon the unyielding pluck of her crew; and even feign to believe that intelligence and scholarship must count in their favor,” observes the News-Letter. But intelligence would not rule the day. The Una quickly outpaced the Wyoma to win the race a full minute ahead. Each boy was awarded a prize cup.

The final race of the Grand Regatta was a tub race. “The gazing throng now prepare for a laughing excitement; for the tub race is announced. Six ordinary tubs are launched upon the water, and the sportive youths enter the same, each ‘to paddle his own canoe’ to gain the coveted prizes. The leaky and unstable condition of the novel vessels results in many an overturn and apparently sinking hopes; but a cooled person and uncooled ardor lead to braver exertions, and the race is won by Brown of ’74; Harwood of ’73 was ahead most of the time, but a luckless foul with another boat, when nearing the shore, lost to him the prize.” The winner received $2.00 – perhaps by this time they were fresh out of silver kitchenware to award.
For all of its mishaps, the Grand Regatta was pronounced a success and for years afterward, at least until rowing became a more organized sport at Phillips Exeter Academy, a regatta was held each spring.
Email Post