Fire at the Box Factory 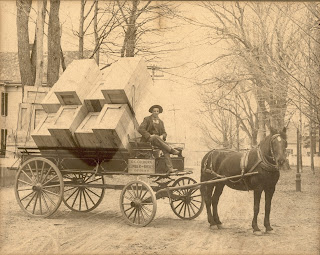 The latest "Historically Speaking" column appeared in the March 18th issue of the Exeter News-Letter.

In the early morning hours of March 10th, 1899, the Exeter Fire Department was called out to a fire at John H. Fellows’s box factory on Rockingham Street. Clarence Warner had arrived at the stables adjoining the factory just before 5 a.m. to feed the horses when he noticed smoke issuing from the main building. He raced to the railroad depot where the telegraph operator turned in the call. Within minutes, two nearby hose companies had arrived and attached lines to the hydrants, but with the notoriously low water pressure of Exeter’s west end, it would do little good against the fast moving fire. They would need the pumper – Exeter’s magnificent Amoskeag Eagle Steamer – if they were going to make any headway with this fire.

The steamer was housed in the downtown on Water Street a mile away from the fire. On a clear day with dry roads it would have been a quick trip up Front Street to reach the box factory, but because Warner had gone to the depot and the alarm had been sounded from there, the steamer mistakenly traveled up Lincoln Street, losing valuable time as it had to turn around to circle back to Rockingham Street across the railroad tracks. Had Warner run just a bit further down Railroad Avenue and turned the alarm from the shoe factory, the steamer would have made a more direct trip.

Compounding the misdirection was the fickle New Hampshire weather. March has the potential to be a beautiful Spring-like month, but it can also spew Winter right back at you. On the day of the fire the Exeter News-Letter had noted, “The weather of the past week has been extraordinary in its variety. A downpour of rain was followed early Sunday morning by three vivid flashes of lightening and loud bursts of thunder. Tuesday was typical of the most blustery days of March. The wind fairly howled from the northeast, and at times one could scarcely see for the clouds of snow, of which half a foot fell. In the afternoon, as another remarkable phenomenon for this season, came more thunder and lightning.” The coldest day of the month was the day before the fire when the temperature plummeted to 8 degrees. The west end of town had not yet cleared the snow from the streets when the Eagle steamer was making its trip to the box factory.

The Exeter Gazette noted that, “the steamer was delayed by the deep snow, and from going down Lincoln street, so it took a full half hour to get around.” The delay would be costly, but not devastating, to the box factory.

John H. Fellows was a relative newcomer to town when he bought the old Elwell box-making plant in 1896. The production of both wooden crates and paperboard boxes was a lucrative trade.

The bulk of Fellows’s work was making shoeboxes. When he purchased the plant he immediately began enlarging this part of the business. The News-Letter had enthusiastically reported on the expansion, “the plant will include a well equipped office for two or three printers to print great variety of labels required for shoe boxes.” Within a year, Fellows had increased the number of employees from 40 to 60 – mostly young women. His shoeboxes and packing crates were being shipped all over New England.

The cause of the fire was never fully determined. The machinery was entirely run by a steam engine housed separately from the shop floor and when the Gazette spoke with the boiler room engineer it reported, “Mr. Hayes says it was all swept clean about the engine room at 6 o’clock, Thursday night, and there was no fire in the building that he knows of.” There was no electrical supply to the factory and they eventually concluded that the fire had been set by arsonists.

Fighting the fire proved to be difficult. With several wooden structures filled with flammable materials, the firefighters could do little to save the wood shop that was fully ablaze when they arrived. “The hydrant streams were rather weak, but sufficed to keep the other parts of the factory wet down. The brick boiler house annex had its roof burned off, and the flames were creeping along the L to the paper box factory when the steamer began to get in its work, knocking the cinders away and heading off the flames.” When the fire was finally knocked down, it was estimated that forty percent of the factory was destroyed. Fellows immediately began planning its full reconstruction.

As the smoke began to clear, the Gazette’s headline of the fire was “GOOD LUCK THAT IT DID NOT SWEEP THE ENTIRE PLANT.” The men of the Eagle Steamer Company knew better, noting in their official log, “It looked awhile as if the whole plant would be destroyed but by hard work on the part of the firemen the largest part of the buildings were saved.” Luck had little to do with it.
Email Post