This "Historically Speaking" column was published in the Exeter News-Letter on Friday, April 10, 2020. 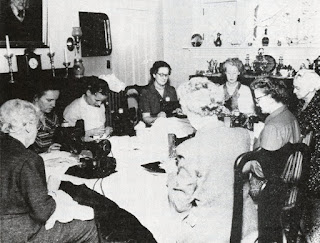 When the Exeter Cottage Hospital opened its doors in 1897, its very existence was due to the persistence of Exeter’s citizens. It had taken five years of fundraising for the trustees to finally decide to rent a small house on Pine Street to serve as a hospital. The first report of the trustees recounted, “A vote was passed empowering this committee to rent the house and make all necessary arrangements for repairing and fitting it up as a hospital. Much valuable help was rendered by gifts of household furnishings of various kinds.” There were only a handful of patient rooms, most sponsored by local donors. Everything else – food, equipment, linens, etc. had to be donated by the general public. Church groups and beneficent organizations were generous in support of the hospital, but in the days before health insurance, both the hospital and patients were often strapped for funds.

In 1906, the Cottage Hospital had outgrown its rented home on Pine Street and a new building was erected at its current location on Prospect Hill. The Annual Report in 1909 found the hospital still in need of necessary donations – not just money, also basic articles. “As inquiries are frequently made regarding articles needed at the hospital,” the report read, “the following list of things constantly in demand is given: Sheets – two yards wide, three yards long, minus three inches top and bottom for hem. Pillow slips, 21 inches wide, 36 inches long, three-inch hem. Night dresses, all sizes; night shirts, all sizes; outing flannel wrappers; outing flannel sacks; bedroom or soft slippers; towels, all kinds; table napkins; dishes, odd pieces for trays; old cotton, linen, and flannel.”

At that time, the hospital had a volunteer organization called the Hospital Aid Association. In 1910, a group branched off, calling themselves the Hospital Guild. Led by and comprised of women, the Guild first met on February 2nd at the home of Mrs. Mary Colton on High Street with the stated goal, “to work for the hospital by supplying the necessary linen and clothing.” Sewing had long been the domain of women and here they were able to use their skills for public benefit. Turning out serviceable linens for the hospital became their service work. By 1913, the group had secured donations of cotton sheeting from the Exeter Manufacturing Company and worked out deep discounts for “pillowcase tubing” from Zelig London’s dry goods store. There were 112 members in the Guild that year – Zelig London was the only man and he did not hold an elected office.

The tasks involved in providing all the linen needs of the hospital (and here I’m using “linen” in the general sense of household textiles not limited to those items made of flax) were those that most women detested. Cotton sheeting was rarely woven wide enough to make a serviceable bedsheet. A long, straight seam down the middle was required to produce the required width. In earlier days, this seam had been done by hand. Laura Ingalls Wilder described the process in The Long Winter, “Laura was sewing two long breadths of muslin together to make a sheet. She pinned the edges together carefully and fastened them with a pin to her dress at the knee. Carefully holding the edges even, she whipped them together with even, tiny stitches. The stitches must be close and small and firm and they must be deep enough but not too deep, for the sheet must lie smooth, with not the tiniest ridge down its middle. And all the stitches must be so exactly alike that you could not tell them apart, because that was the way to sew.” She often felt like throwing the whole thing across the room. Luckily for the Guild members, there were sewing machines available for this part of the process. Still, every sheet had to be measured, cut, hemmed and pressed to the exacting standards required by the hospital superintendent. Everything had to be sturdy enough for repeated high temperature laundering. In its first year, the Guild turned out 488 articles including bureau covers, doctors’ towels, pillow cases, patients’ towels, night shirts, baby slips, petticoats, blankets, diapers, bath towels, sheets, wash cloths, glass towels, dish towels and roller towels.

There was so much work, and enough eager volunteers, to split the process into two committees – the sewing committee and the cutting committee. Cutting the fabric was a skill unto itself. By 1925, there were more specialized items being made, including OR (Operation Room) drapes, and the expansion of the obstetrical department meant that more infant garments needed to be made. The report for that year lists crib sheets and pillowcases, baby blankets, belly bands, bassinet headpieces, baby night gowns, baby undershirts and 32 ‘gertrudes’ (a type of infant nightgown with buttons at the shoulders). The cutters measured out 264 diapers for the sewers to hem. Two years later, the Sewing and Cutting Committees completed 1751 items.

The output of the Hospital Guild went on for decades. Sarah Nicholl, the hospital superintendent, noted in 1949, “The Hospital Guild deserves special commendation for the plentiful supply of hospital linen which has supplied our needs and kept up our reserves.” 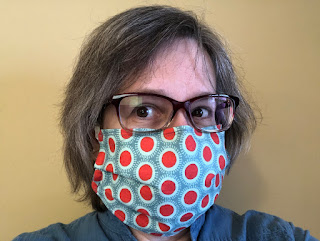 Part of the allure of the Guild might have been the sociability of the work meetings. It was a chance to get together to work on needed objects that would help the community. And there were always refreshments. Our sewers are again needed by the community to make face masks during this time of social distancing. If you are one of them, remember to step back from your sewing machine every few hours and have a cookie.

Images: the Exeter Hospital Guild’s sewing committee hard at work in 1955. The second photo is the author wearing a covid mask made by Beth Diamond (of Exeter) who is working with the Seacoast Mask Makers. Barbara owes her a box of Girl Scout cookies.
Email Post