Growing Pains in the New Republic – Exeter after the Revolution

This "Historically Speaking" column was published in the Exeter News-Letter on Friday, December 6, 2019.

Respectable. In the years following the American Revolution, Exeter strived to be a respectable town with respectable people. In retrospect, this seems like it would have been an easy goal to meet. The town had, after all, been founded by stoic Puritans. Sure, they were stoic Puritans who’d been tossed out of the Massachusetts Bay Colony, but they were hardly anarchist rebels. In order to wrench a living out of Exeter’s rocky soil on the banks of the Squamscott, they turned to that basest of industries – lumber. Dr. Samuel Tenney would later say of the industry, “it serves to keep those engaged in it in a perpetual state of poverty; while, at the same time, it commonly ruins their morals, and induces a premature old age. The only gainers by this favorite employment are the traders who purchase, and the merchants who export the lumber.” Timothy Dwight, travelling through town in 1796, said of it, “suffice it now to say, that such of the people of Exeter as were engaged in it were poor, idle, haunters of taverns, and devoted to all the baser pursuits of vulgar vice.” After most of the trees were gone Exeter had to patch up the pieces of its sullied reputation. Several things helped them along. 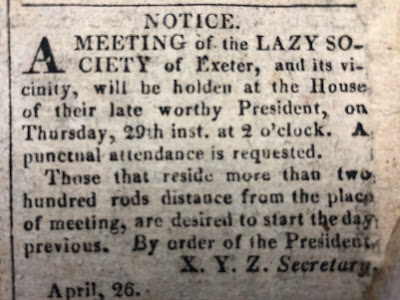 Exeter became the state capital just after the first shots of the Revolution were fired. Portsmouth, the provincial capital, was deemed indefensible due to its coastal location. During the early decades of Exeter’s state significance, the local meetinghouse and taverns served as the gathering places of government. Tenney remarked that the town’s appearance improved – somewhat slightly. “The other publick buildings are a very handsome and convenient court-house, of nearly the same dimensions as the academy, erected, at the expense of the county, and town, in the year 1792; and two meeting-houses, which have nothing to recommend them but an appearance of antiquity.” The town’s new status meant that the state’s legislature (the General Court) as well as the Federal District and Circuit courts met in town. Even after the capital moved permanently to Concord, Exeter remained the county seat. When court was in session, people were drawn to it as free entertainment. “The court was open to ladies,” remarked Elizabeth Dow Leonard, “and if the cases were interesting to us, we went in to judge for ourselves what sort of men sat in judgment upon us.” Watching court proceedings was something of a spectator sport, kind of like watching Judge Judy. “The presence of such a Bar as then filled our Court House was a delightful episode in our lives and added very much to the interest and intelligence of our society,” continued Leonard, “Social and formal parties were made for its members, and new interest in civil proceedings was constantly excited. The cases pending were intelligently discussed, and in criminal cases the evidence of witnesses and the decision of the jury was one of absorbing interest and relieved very much the pettiness of country life.”

The establishment of Phillips Exeter Academy brought both respectability and novelty to the town. Boys from far away came to Exeter to prepare for college – giving the town an educated vibe. These young men were sought after by the local young ladies. As late as 1785, it was still deemed acceptable for young people to attend ‘assemblies’ – or country dances – at local taverns. In 1785, twenty-one-year-old Patty Rogers enjoyed these events even though she was a pastor’s daughter. “The evening was fine and passed rapidly as scenes of dissipations [she means frivolity and drinking] do – we danced till one o’clock and then Philammon saw me home again – supped and went to bed.” These were more formal than we may imagine. Leaverett Saltonstall, who attended Phillips Exeter in 1796, listed the dances he had to learn in dancing class: President, Young Widow, York Twister, The Fly, Shady Groves, and Maid of the Pump Room. The only one this author was able to track down (through the magic of YouTube) was the Young Widow. In spite of the fact that these dances all seem have to porn names, they were similar to contra dances. The sexes barely made contact with one another, instead reveling in the intricate steps and aerobic workout. The scandalous waltz wouldn’t make its way to Exeter for some time.

The salad days of Rogers and Saltonstall didn’t last. In its quest to be come respectable, Exeter became more rooted than ever in a strict class system. Elizabeth Leonard, who was born 40 years after Rogers, lamented, “We were very tenacious of our reputation for high culture and good breeding, and we most carefully ignored the amusements of common country life and people. Even promiscuous dancing was tabooed at our country balls, as bringing us too much in contact with the canaille [she means riffraff] who had not attended dancing school at least one quarter. We danced, but it was only with our set, for no Hindoo [apologies, but she really wrote that] castes were ever kept more inviolately intact in their amusements than were ours, and we gave up fun and looked after the shadows of our own dignity instead.”

Poor Elizabeth! Staying home to protect her respectability instead of enjoying the fun! Perhaps it was for the best. After Patty attended a most “agreeable” evening at an assembly in January of 1785, the next day was not so agreeable. “Friday, January 21 – very stormy – felt sick – never felt so sick after assembly – but kept up till 9 o’clock.”