This "Historically Speaking" column was published in the Exeter News-Letter on Friday, November 22, 2019. 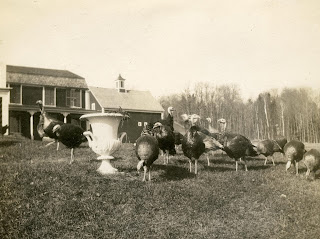 It’s time to pick up that turkey for Thanksgiving. We all know that not everyone has turkey for Thanksgiving. The day is set aside in the United States as a feast day and a feast can be any kind of food you want. Nonetheless, the turkey has become the indelible symbolic center of our Thanksgiving feast. A native bird, its size was probably the reason it was used as a dish for big events. In New England, the wild turkey had largely disappeared by the mid-1800s. Clearing land for crops had ruined the bird’s forest habitat. The only turkeys around were domesticated breeds raised by farmers.

The date for Thanksgiving shifted around for decades. Harvest festivals were celebrated in England and, most likely, the Americas for centuries. George Washington suggested a Thursday in November in 1789 and the tradition of a Thursday event seems to have just rolled through the decades. Bostonians tried to fix a date and, like Washington, also decided Thursday was a good day. It was far enough away from the Christian sabbath on Sunday to avoid interference. Thursday was also a day when many local ministers held lectures and discussions. Nobody seems to have consulted the two groups who might have objected to Thursday – farmers and housewives. Thursday was market day in most New England towns – including Exeter. It was the day farmers brought their produce to town and the woman of the house obtained foodstuff supplies for the week. Holding the holiday on a Thursday mucked up this schedule. An 1853 entry in the Exeter News-Letter lamented, “the consequence, last week, was, that our market was as empty as an egg-shell on Wednesday, and not a few families failed of their usual supply of chickens, and some of their turkey even. The price went up as the supply went down. In Newburyport, on Wednesday, turkeys sold at 27 cents a pound and chickens at 25, although they commanded but 12 ½ cents and 10 cents on Tuesday. In Boston, the price was considerably higher on Wednesday than on the day previous. Tuesday is early enough in the week to kill poultry which is to be eaten on Thursday, no matter what the weather may be.”

Twenty years earlier, Portsmouth was concerned with ruffians on Thanksgiving. There had been a long-held practice of giving to the poor, or at least poorer classes, on the evening before Thanksgiving. This had petered out by mid-century, but in 1836 it had devolved into a night of mischief. The News-Letter made note that the Portsmouth Journal, “is indignant at the bonfires which illuminate that town on the evening of Town meeting days, Thanksgivings, and other great occasions. Very few people approve of them; but they are considered necessary evils, that must be submitted to without remedy. It might not be good policy to prosecute the little urchins, for their noise and mischief.” Instead, it was suggested that parents take the lead. “Let them send their big boys, and little boys, off to bed as soon as it is ‘dark under the table’ – maintain discipline and good order at home, by the aid of hemlock twigs and broom stick – and there would be no disturbance abroad – no burning of tar barrels on the parade, - and no danger of burning up the town in a general bonfire.”

One thing was for sure, Thanksgiving, it was hoped, should not become an out-of-control kind of day. It was not to become like the old muster days or county fairs, described by the News-Letter as places at which, “the clock, and tin, and gim-crack peddlers, the fiddle, the song, the occasional fight, the rouge et noir table, the dice board, the thimble-rigger, and the other stimuli through the help of which a few stirring robberies, and, now then, a thrilling murder were accomplished.” Thanksgiving, however, “is observed in a more profitable manner than musters or most other jubilees can be, because the center of pleasures is usually at home, where all the family can take part in the wholesome hilarity without any fear of injurious effects.”

Our forefathers would be happy to know that Thanksgiving has not become a carnival. We still gather with family – actual or created – and eat. We also watch parades and football and dog shows on TV. We discuss the upcoming holidays and eagerly plan gift shopping. And the wild turkeys are back, thanks to the concerted efforts of Fish and Game in New Hampshire and other eastern states. The birds were reintroduced – lured, really – back into the state in the 1970s. Their numbers have increased enough to allow permit hunting. Exeter has numerous flocks of wild turkeys strutting around, blocking traffic and driveways. Watching these dinosaurs stalking the backyard, frightening the house cats, is definitely the “wholesome hilarity” our ancestors were encouraging. Have a happy Thanksgiving.


Photo: “Domestic turkeys at an unknown Exeter farm c. 1920. This picture is from a photo album in the collections of the Exeter Historical Society.”
Email Post