This "Historically Speaking" column was published in the Exeter News-Letter on Friday, Sept. 13, 2019.

“Washington, D.C., June 10 (1919): Congress heaved a mighty sigh of relief the day the suffrage amendment was wiped off the slate. Even the men who most bitterly opposed it were glad to be rid of the constant heckling of the militant women, who now are jubilant” wrote Maud Richards, a political correspondent for the Exeter News-Letter. With this act of legislation, Congress tossed the problem of Women’s suffrage to the states for ratification. Suffragists had made a push, in the opening decades of the 20th century, to pass a constitutional amendment because voting laws in individual states were a hodge-podge of legality for American women. The ability to participate in the government was dependent on where one lived.

Suffrage supporters had been hopeful that new amendments passed after the Civil War would extend voting rights to women. After the passage of the 14th amendment in 1868 – which clarified citizenship, but defined voters as “male citizens above the age of 21,” the New Hampshire Woman’s Suffrage Association was formed under the leadership of Armenia White in Concord. The 15th amendment, passed in 1870, further clarified that the vote could not be denied to any citizen “on account of race, color, or previous condition of servitude” avoiding once again the question of sex. Within these guidelines, however, individual states could confer voting rights to anyone. Some states, particularly in the west, had extended voting rights to women. But in the east and south, where women had been denied the right to vote since colonial times, the idea hadn’t caught hold.

New Hampshire, like a few other states, did feel that women should be involved in some type of civic engagement. Maybe not state or national politics – viewed as base and unseemly – but maybe just issues that involved the children. Children aren’t involved in messy tariffs or bimetallism, so maybe women should be able to have a say in school elections. In 1872, the legislature passed a law allowing women to serve on local school boards. In 20 communities across the state women did just that – even though they couldn’t actually vote in these elections.

In 1878, the Susan B. Anthony amendment was proposed in the US Congress by Aaron Sargent of California. This was also the year that New Hampshire decided that perhaps women should be allowed to vote in local school elections. The following spring, Exeter complied with the new law. “On Saturday afternoon the first gun of the female suffrage campaign in this town was fired in a highly interesting and effective manner,” reported the Exeter News-Letter. “The occasion was the school meeting in district No. 1, and, as under the new law, the ladies were for the first time entitled to vote.” The meeting was held up, however, when the room filled with only men. After a moderator for the new year was elected, a small group of women entered and sat in the back. The meeting was then postponed until evening to enable a few of the men to escort more women to the hall – it seems that women may have been granted the right to vote in a school election, but it was still a bit uncomfortable for many to attend a meeting without a chaperone. This decision increased attendance considerably, “few entertainments draw so good an audience as met to welcome the fair but inexperienced voters.” It surprised everyone, it seems, that when the time came for actual voting, “the ladies deposited their votes with the calm resolution of veterans, and their success will doubtless encourage them in the future.” Miss Mary Gordon, home from teaching in Washington, D.C., was chosen to work on the Prudential Committee, but when a challenge arose to appoint two more members (presumably men), a verbal ruckus ensued and the entire meeting was adjourned until June. “Thus ended the first ‘mixed’ school meeting,” the News-Letter dryly concluded.

It wasn’t until 1884 that a woman tried to actually run for a school board in Exeter. Jeanette Talbot ran and was soundly defeated. Meanwhile, the Susan B. Anthony amendment languished in committee. It was voted on, and defeated, in 1887. But that didn’t mean it wouldn’t be brought up again – the move toward women’s suffrage continued. The Grange endorsed the proposal in 1885. The Women’s Christian Temperance Union petitioned the government for suffrage in 1886, followed by the American Federation of Labor in 1890. 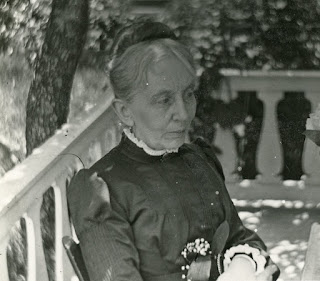 On March 30, 1892, Lucy Bell become the first Exeter woman elected to the school board, making her the first Exeter woman elected to public office. The event was not mentioned in the Exeter News-Letter, although it was picked up and reported around New England after the Exeter Gazette ran it as a single sentence. She served only one year of her three-year term. The following year, two women, Rosa Akerman and Harriet Burlingame, put their names forward as candidates. Both were defeated by large margins. After Bell’s death in 1920, her election to the school board was not mentioned in any of the memorials or her obituary.

In 1902, the New Hampshire Constitutional Convention, proposed that the word “male” be stricken from the suffrage clause. The proposal was defeated, but the fact that 40% of the voters (all male, of course) voted in favor was seen as encouraging.

In 1918, President Woodrow Wilson surprised everyone by changing his stance on suffrage. The amendment had been proposed and voted down numerous times before it finally passed in June of 1919. Sensing that it might actually be ratified, New Hampshire College (later to become the University of New Hampshire) offered a four day citizenship course for women. The battle for suffrage had been bitter – with even many women in opposition – but the college sought to bring them together. “Women have honestly disagreed upon the advisability of granting suffrage to their sex, but all New Hampshire women will unite in a desire to serve state and nation in the best possible manner…(and) will work together for the highest standard of citizenship in the state.”

On September 10th, 1919, New Hampshire was the 16th state to ratify the Susan B. Anthony amendment. Exeter’s Senator James Arthur Tufts voted against ratification, which didn’t seem to impact his reelection a year later. It would take nearly another year – and 20 more states – to fully ratify the amendment, but Exeter’s women were ready to vote when the time came.

Image: Lucy Bell (1838 – 1920) long time art teacher at the Robinson Female Seminary and the first Exeter woman elected to public office, serving on the Exeter School Board from 1892-1893. New Hampshire women were allowed to vote in local school elections beginning in 1878.
Email Post