The Grand Army of the Republic

This "Historically Speaking" column was published in the Exeter News-Letter on Friday, May 24, 2019. 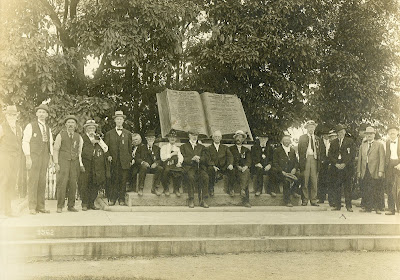 It began with an odd, slightly feminist, entry in the Exeter News-Letter in June of 1870. “We are pleased to learn that a self-instituted committee, consisting of Mrs. Moulton, Mrs. Inez Gordon, Miss Sarah Cobbs, Miss Jennie Perkins, Miss Bartlett and Miss Bailey, procured flowers on Monday, May 30th, and proceeded to decorate the graves of soldiers who fell in the late civil war and who are mostly buried in our midst. We believe this manifestation of love, esteem and gratitude towards those who fell in defense of home and country has been observed by the ladies of this town for two or three years past. Now we think this is slightly in advance of the times; and, until women are allowed the right of suffrage, if they wish it, men should establish a Post of the Grand Army of the Republic.” Written just two months after women were specifically excluded from the fifteenth amendment guaranteeing the right to vote to all male citizens, it reads just a tad mocking.

But suffrage aside, the point was made – the veterans of Exeter needed to organize a veterans group. The Grand Army of the Republic, a voluntary fraternal organization created in 1866 for veterans of the Union forces, was necessary for more than just decorating graves. Men who had experienced war together needed the benefit of one another’s company. Probably no one articulated this better than Oliver Wendell Holmes in his 1884 Memorial Day address delivered in Keene. It’s a speech most of known for the line, “in our youth our hearts were touched with fire.” Earlier in the speech, however, he has this to say to his fellow veterans, “Accidents may call up the events of the war. You see a battery of guns go by at a trot, and for a moment you are back at White Oak Swamp, or Antietam, or on the Jerusalem Road. You hear a few shots fired in the distance, and for an instant your heart stops as you say to yourself, the skirmishers are at it, and listen for the long roll of fire from the main line. You meet an old comrade after many years of absence; he recalls the moment that you were nearly surrounded by the enemy, and again there comes up to you that swift and cunning thinking on which once hung life and freedom - - shall I stand the best chance if I try the pistol or the sabre on that man who means to stop me? Will he get his carbine free before I reach him, or can I kill him first? These and the thousand other events we have known are called up, I say, by accident, and, apart from accident, they lie forgotten.” Holmes saw heavy combat during the war, and the men he was addressing that day – the men of John Sedgwick Post No. 4, Grand Army of the Republic – knew exactly what he was talking about. It’s the part of war that never leaves the room, and the only other people who understand those ‘accidents’ of memory are the other men who were there.

After the News-Letter mentioned the ladies’ efforts, the veterans of Exeter quickly applied for and formed their own post. It was named for a lieutenant-colonel of the Eleventh New Hampshire Volunteers named Moses Norris Collins. Collins had been born in Brentwood. He read law with Gilman Marston of Exeter and became his partner. A budding politician, he was a representative for Exeter in the New Hampshire General Court before joining up in 1863. During the battle of the Wilderness, he was mortally wounded by a musket ball through the head at the age of 44. Many of the men who formed the Exeter post saw combat at Wilderness. George Stokell had been wounded and left for dead. He was found alive by the southern forces, had his arm amputated and spent the remaining nine months imprisoned at Andersonville. Sylvester Pevear was, like Collins, struck in the head in the same battle. The bullet entered his eye, which was lost, but astonishingly reemerged during a coughing fit. He saved the bullet, which can be seen, gruesomely distorted, at the Exeter Historical Society. These were men who understood war and by necessity understood each other.

Like most Grand Army of the Republic posts, the Moses Collins Post No. 26 became the promoters and guardians of Memorial Day services in town. The meeting hall was located in the old town building on Court Street (which today is the Senior Center). Charged by the state and national encampments to hold annual memorial events, in 1911, they were reminded, “The address of President Lincoln at Gettysburg, November 19, 1863, shall be read at all Memorial Day exercises.” It was up to the veterans to remember, because less than 20 years after the war’s end, Frank Rollins, Master of Ceremonies at the Exeter Memorial Day service, “alluded to the scant attendance, and said that the old soldiers could not help remembering how different it was during the war. Then the hail was full and all anxious to induce others to go to the war and to honor them for going; now only a few are here. Many say that the old war spirit is dying out, but as long as two comrades of the Grand Army remain, they will meet to do honor to the memory of those who have gone before them.”

The men met frequently. Within the rituals of meetings, there was healing. Annual encampments, either statewide or national, brought them together with other veterans. In 1913, on the 50th anniversary of the Battle of Gettysburg, the Grand Army of the Republic held its encampment on that very battlefield. By that time, there were few men left in the Moses Collins Post. But Albert Severance, Oliver Yeaton, and Daniel Bennett of Exeter were there, along with Horace Smith of Newfields, Sylvester Pevear of Brentwood, Franklin Cass and George Swett of East Kingston and George Murch of Newmarket. The post continued on until 1931, when the last surviving member, George Hopkinson of Epping, died at the age of 86.

The services we hold at Memorial Day today descend to us from those created and fostered by the G.A.R. Oliver Wendell Holmes explained it back in 1884. “But as surely as this day comes round we are in the presence of the dead. For one hour, twice a year at least – at the regimental dinner, where the ghosts sit at table more numerous than the living, and on this day when we decorate their graves – the dead come back and live with us.”

Photo: Members of the Grand Army of the Republic at the Gettysburg Reunion, 1913. Sylvester Pevear is the 3rd man from the Right in the front.
Email Post